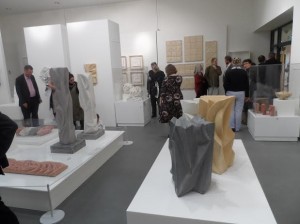 A little while ago I was delighted to find out about the Halima Cassell exhibition due to open in the recently relocated Kirkby Gallery and Library. I was aware that Knowsley had 2 galleries that show a range of really interesting art whether it was an open art exhibition of local residents work, or touring exhibitions such as the recent display of JW Turner prints, but hadn’t realised that Kirkby now has a new state of the art gallery.

It was strange travelling to the gallery as I drove past the site of Brookfield Comprehensive, where I went to school in the late 60s and early 70s. The school fields I used to walk across every morning are now a large housing estate rather than an area serving a school of 3 large buildings, 2 gyms, a swimming pool and technical block which taught over 1,00o pupils. It reminded me that Kirkby has moved on; it is no longer the town which had the highest population of people under 20 in the whole of Europe in the 70s, but has matured into something quite different.

This theme of change continued as I parked the car outside what used to be the civic centre, which now houses the council’s one stop shop, new library and art gallery. I remembered Huyton Gallery is also housed within the library, thus signifying their close relationship and how Knowsley strives to put art and culture into the heart of their communities. 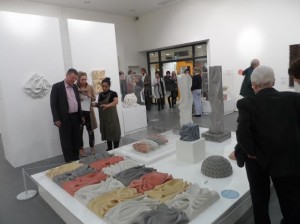 I was met with a large white cube with large windows on one side letting in natural light and a glance upwards revealed sophisticated lighting rigs. This leant itself well to Cassell’s work, which is a series of sculptures using a wide arrange of materials including concrete, glass, ceramics and wood. It was clear from the start this is an artist interested in line, form and pattern. It seemed to me to be both traditional and contemporary at the same time. There was a strong aesthetic that could be enjoyed by the eye plus references to a wide range of cultures whether they be Islamic, African or contemporary British urban.

The arts team were delighted to have this show as their inaugural exhibition for the gallery. Born in 1975 in Pakistan, brought up in Manchester and now living and working in Blackburn, Cassell has moved away from being a young, emerging artist and has established herself on the International arts scene with shows in this country as well as places such as Belgium and Japan. This is the first time all the different aspects of her work has been brought together, and I would suggest marks a turning point in her artistic career. She has established herself as a major artist and as the flyer says “this exhibition charts her use of design, process and experimentalism over the past 20 years.”

Although the work is all connected by her strong design ideas there is a wide range of medium used. Of particular note and perhaps unusual in a galley are a selection of wallpaper designs she did for the company Graham and Brown, and Amoeba Pool, a work made with rhubarb lead crystal glass which is either green or red, depending whether it is lit by natural or artificial light; wood – carved with a chain saw; bronze and clay. 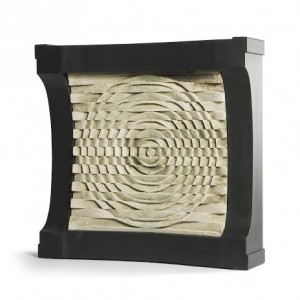 Cassell was pleased that the exhibition gave her the opportunity to work with concrete, some of it coloured. By doing this she was responding to Kirkby’s reliance on this building material. This is a material she has been interested in working with over the past 6 years and being invited to exhibit here in Kirkby has helped her realise her curiosity and vision for this material. All the work in concrete including the installation Earth, wind, fire, water (2014) were created especially for this show. They sit resplendent in the centre of the gallery, with their form, pattern and contrasting colours confidently claiming their place at the heart of the gallery.

Other works, especially a very early piece entitled Moss Ripple (1995), reminded me of the Op Art artist Bridget Riley with its repeating patterns, straight edges and ability to deceive the eye. I was also able to have a quick chat with Cassell and she said as a young artist she was influenced by Riley, Escher and an artist I had not heard of; Victor Vasarely.

Cassell also revealed that she is dyslexic, left handed and (perhaps unusual for an artist) has a keen interest in maths. In her view this helped her interest in creating work initially in 2 dimensions and then imaginatively converting it to 3 dimensions as it allows her to use both sides of her brain the logic and creative side.

Another interesting influence on her concrete work executed for this exhibition was the work of artist William George Mitchell. A piece of his that was originally commissioned for Kirkby has been brought out of storage and is now on display in the new library. He was also responsible for the magnificent doors on the outside of Liverpool Metropolitan Cathedral, and is interested in line, form and space and translating it into contemporary language.

Geometric forms found in nature are also represented in this exhibition, which brings a warmth to a lot of Cassell’s work. This is exemplified by Thistle Head (2009) and a series inspired by the Lake District which included pieces called Echo, Tulip and Pendula. 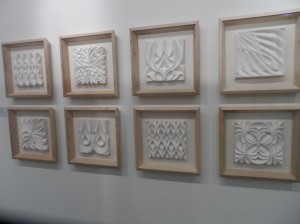 There is an area devoted to how Cassell carries out her practice and it is clear there is a lot skill and dedication that goes into making these often very precise pieces of work.

I found this to be an impressive inaugural exhibition in Merseyside’s newest gallery. I look forward to going to many more shows here and seeing how the curators use the space. I also plan to start following Cassell’s career with interest to see what future direction it will take. To find out more about her work go to  www.halimacassell.com

Halima Cassell: In Focus continues at Kirkby Gallery until 19 April 2014

Cassell is giving a talk about her work on 20 March at 13.00 – book your place at galleries@knowsley.gov.uk.