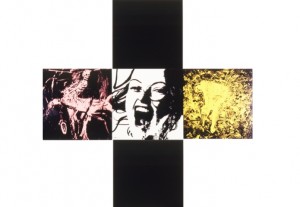 Gretchen Bender was an American artist who worked primarily in film, video, and photography. Her work shares the concerns of the generation of early 1980s Pictures Artists, which included household names such as Cindy Sherman. Although seemingly overlooked in recent years, Bender stars as part of Tate’s Autumn/Winter season Making Things Public, with an exhibition addressing how she experimented with found images to explore ideas surrounding the transmission and distribution of culture.

According to the New York observer, “Gretchen Bender’s art is having a moment” but sadly, this somehow doesn’t translate to the show at Tate Liverpool. Having visited the exhibition twice now, the emptiness of the gallery has been apparent – both of people and of art.  The sparsity of the exhibition space hits you as you enter the gallery, and with barely ten works to fill the huge white cube, the stark contrast from the bustling, conversation-inspiring buzz of the Warhol exhibition next door is toe-curlingly apparent.

Works on show include Bender’s opening credits for US TV show America’s Most Wanted along with four music videos she produced in collaboration with director Robert Longo. As interesting as these could potentially be, the films are housed in a small room on one screen on constant rotation. I found this a perplexing curatorial decision, given that next door, Warhol’s archive of film and television programmes are each awarded their own screen, suggesting a level of importance granted to the Warhol’s work which is severely lacking in the Bender exhibition.

The real coup of the show is Total Recall (1987), an eight-channel installation with 24 TV monitors and two rear projections combining corporate logos from TV commercials with computer-generated graphics by Amber Denker, doctored clips from Oliver Stone’s Salvador and a post-punk soundtrack by Stuart Argabright. The installation is walled off, taking up half of the  entire exhibition space and is overwhelming to behold: as the darkened room is gradually filled with light, colour and sound from the huge wall of screens, the viewer is immersed in a nightmare of cascading corporate iconography, and snippets of eerily smiling faces from American TV advertising. The booming electronic soundtrack pulses through the floor as your eyes struggle to keep up with the aggressivly rapid barrage of flashing images on the screens. Total Recall provides a mesmerising critique of the violence and commoditisation of images in society, as Bender exposes the false nature of corporate messaging and the sinister excesses of television itself. (Watch an excerpt from the installation here.) 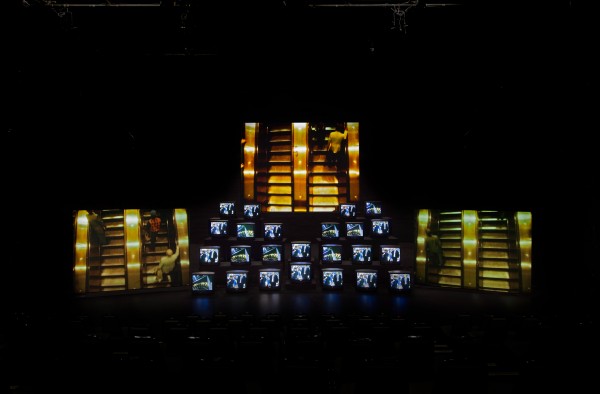 In the 1980s, Bender anticipated our current state of image saturation, using hypnotic repetitions of television footage, and aggresive walls of sound to create immersive viewing experiences. Appropriating images from mass media and using a plethora of cultural references, Bender directly addresses the powerful influence of mass broadcast media. By contrasting the menacing force of corporations and technology with the struggle of individual human beings through pictorial references, Bender’s work is overtly political and subversive in its intent.

With all this fascinating theory behind the work, it would have been great to see more of her famed “electronic theater” (sic). Where are digital installations Dumping Core and Wild Dead (both 1984)? And what about the infamous People in Pain (1988) which is noticeably missing here? It’s a shame that Tate were unable to acquire more of her works for the show, as without these large-scale immersive pieces, what we are left with hardly uncovers anything new, nor showcases the talent and influence boasted of this artist in the interpretation.

Contemporary Art daily described Gretchen Bender as being “among the most prescient yet overlooked figures of her generation”, and unfortunately, her first solo exhibition in the UK does little to rectify this injustice.