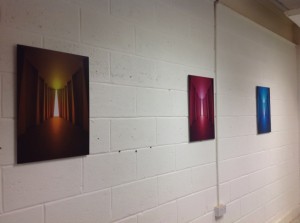 On entering the Gostin Arcade on Hanover Street, Liverpool, one leaves the busy, near-central experience of the city and is confronted by what feels like a commune, a village almost, compact and quiet yet noisy with clutter and independent businesses. Following the directions I had been given by the artists, I found my way to ASmallView. This is the name given to the small space rented by Benjamin Davies and Kelly Hayes, and the host location of the exhibition, The Holodeck.

The show focuses on the act of simulation, or creation, of model realities in favour of our actual one. As the first line in the exhibition description reads, ‘In the hideous complexity of real life, models can be used to cut through the noise.’ An immediate overview of the show is that it is an exercise in creation/simulation of worlds beyond, burrowed in our own. By this I refer to the obvious  paradox of escapism; one can only ever find hiding-places in the reality we already inhabit.

The room is small, white, but not white cube-clean. The work appears equidistant from each other on the three walls (the fourth being a window onto the rest of the arcade). Straight ahead on the far wall is a medium sized flat screen television with an Xbox controller on the ground in front. To the left are three brightly coloured digital prints and on the opposite wall are eight slightly darker digital prints laid out in grid formation, two down and four across.

The latter is the work of architect Jon Mackereth. Using a miniature model of a room which may or may not exist in our reality, and what was described by one of the other exhibiting artists to be a date and time light simulator, allowing one to simulate the exact lighting of the sun on any given day and at any given time. The model room, this simulated space, is basic and looks believable from a fair distance. However, what is truly fascinating about this series of images is the light, the focal point; the apparently accurate simulation of actual-time, human-time, time measured by the light of the sun. This rather dramatic realisation, that time is replicated so effortlessly in this age of technology, is also very simply executed; mere light from the window and on the floor. The presentation of the work, however, could perhaps have been executed a little better as it seems rushed, careless. Perhaps this is intentional(?).

Opposite this piece is the work of Kelly Hayes. Three digital prints on aluminium, mounted in a row on the wall. The images present a flawless model. Clean cut, sharp edges and stunning. Each is lit by a different coloured light; red, orange, blue. This perfection in finish reminds something of sci-fi, although I cannot quite place it. Abstract, yet very obviously of a doorway, corridor, or simply an exit; it seems beyond solid reference, and beyond human intervention; as if the simulation of utopia can only be without us. This idea of simulations and models comes across most strongly in this piece, from the perspective of the ideal. Why choose imperfection when playing god, or a creator…

The finish of these pieces brings to mind the future. A distant future of perfection, of clean cut design, of quietude yet bathed in artificial light.

The work of Benjamin Davies, however, reminds me of a future that feels ever looming, more so with every tragic news story of suffering, poverty, destruction and death. The art is a video game – how relevant – in which one wanders a world of imperfections; a world designed, destined to be forever in decay and disarray. Navigating the streets and forests of this landscape, one notices the mess, the clutter, the shit left behind by a species obsessed with buildings, plastic, signs and advertisement. And then one notices the lack of such species. The haunting silence and consequential realisation that they had drained their Earth of its resources and left for somewhere better. Or quite possibly, more realistically, ‘You failed. Better luck next time.’

Wandering the map of Benjamin’s game, one travels through portals – somewhat taking on the form of Stanley Kubrick’s Monoliths, 2001: A Space Odyssey – between different levels or ‘dimensions’ of this place, this space, this realm of the artist.

Constructed from digital textures, images, and what appears to be pen drawings masquerading as graffiti, all in black and white and red, the space created by the artist resembles a kind of dream world and at the same time is disturbingly close to our own reality, bringing to mind the landscapes of the films of Terry Gilliam; caught somewhere between reality and fantasy.

The piece is shrouded in theory and romance of post apocalypse, existentialism and escapism. Tweeting about his work, Benjamin wrote, ‘The idea of inverting the sky came from Tarkovsky’s Ivan’s childhood.’ And it is very much this honesty that drives the aesthetics of the piece. One can walk beyond the streets and find themselves among discarded buildings, stray textures, unusable objects. And then further. Walk to the end of the map, to the very edge of everything: if you fall, and I suggest you do, make sure to look up…watch the world drifting further and further away, until the artist’s creation appears as nothing but a distant planet in a vacuous matt grey, textureless sky…

This issues and concepts raised in this exhibition all merit considerable discussion, however, most of all I feel compelled to point out the conscious decisions of the artists to create these worlds. The idea that we remove our selves from reality everyday, when one steps back to contemplate, is concerning. Through video games, mindless television programmes, films, – images of the world we’re leaving behind –  we lose ourselves and our position in reality. The act of creating these places of escape seems to be on a different level all together. Like leading a revolution; someone needs to take the first steps, make the posters and shout something loudly. I feel as though creating these places, these pieces, doesn’t only allow escape, but clearly points out that we actively search for the means, making this exhibition a rather loud cultural statement.

You don’t need reality to find something ‘real’. You cannot escape, even by escaping.