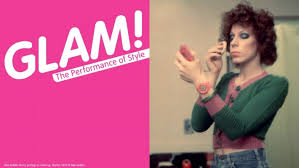 Celebrating the ‘Performance of Style’ Glam! purports to be more concerned with the ‘look’ of glam-rock, and the music is made highly conspicuous by its absence, despite the ‘performance’ of the title…

Upon entering the exhibition, visitors are engulfed in a vision of pure glam: from magazine covers and album sleeves, to costume designs and sequinned jackets, glam assaults the eyes from every angle. One salient aspect of the movement remains allusive, however, and this was the most important: the music. Without the music itself, the whole glam era would not have existed. The musical output from legends such as Marc Bolan and David Bowie was instrumental in capturing the attention of the world, who then went on to emulate the image of their glam rock icons. The music created the style, and without it, fans surely could not have held these stars in such high esteem.

This, on the part of Tate curators, could have been a conscious decision in order to highlight the obsession with fakery and the superficial of the 1970s, as Glam! contains memorabilia and archival evidence that people enjoyed dressing up and pretending to be someone else entirely. The opening room of the exhibition, however, makes this seem light-hearted and silly, and conceals the truth that a lot of these people (including images of transvestites) are actually trying to escape from who society has made them, and so the act of faking it is not at all superficial, but actually fuelled by larger societal issues (see the feature on ‘Kenny’ in the second half of the exhibition). I felt that the inspiration/cause behind the glam-rock scene was largely ignored and would have really benefited the collection had it been present.

The exhibition does contain some amazing pieces of glam-rock history, including a costume belonging to Brian Eno and Bolan’s top hat from T. Rex’s The Slider album. My favourite by far in this first half of the exhibition was a video made by a student in the 70s documenting his friends dressing up for a Bryan Ferry concert. The film illustrated how, for young people living in a dull urban environment, the sound of Roxy Music and other glam-rock bands created a fantasy world to which youths could escape to in their sequins and glitter. Although for these students the look was important in order to step away from the everyday, there was no doubt that the film-maker intended the message to be about the escapist element of the music.

For me, the exhibition really came into its own in the second gallery: Glamscape USA; although the shift overseas was not well documented and the chronology of the exhibition (including influences and musical progression) could have been much stronger.

Artists featured in this section included Andy Warhol, Cindy Sherman and Peter Hujar. The images and messages in this half of the exhibition were infinitely more powerful than the first and spoke volumes about the real, dark underside of the glam world. A study of the collective at Warhol’s studio The Factory was fascinating, including images from behind the scenes of his New York play Pork set to a haunting rendition of I Wanna Be Your Dog. This was one of the only audible pieces of music in the entire exhibition and was not overtly of the glam movement, but was an effective addition to the pieces in the gallery.

Cindy Sherman’s re-working of a Vogue cover starring Jerry Hall, was ironically transformed into an image of her own face, winking at the camera and subverting the conventions of acceptable glamour. I particularly enjoyed Ulay’s images of himself dressed as both man and woman, which play with ideas of androgyny and what it means to be ‘glam’, and worked well alongside images of the New York Dolls and The Cockettes. Punk artist Jimmy de Sana was also on show, with his unnerving self portraits set in bizarre and surreal situations.

The most striking and darkest image by far though was Peter Hujay’s photograph of Factory actress Candy Darling lying on her death bed, with the infamous quote: “Unfortunately before my death I had no desire left for life . . . I am just so bored by everything. You might say bored to death… I couldn’t last.” which is a clear comment on the pressures of the industry, covered up by the glamour of clothes and make-up.

Glam! is a fantastic collection of work and the second half of the exhibition especially facilitates an incredible insight into the underworld of the movement. I was disappointed about the lack of music on offer, and also the much hyped Marc Camille Chaimowicz installation, which I felt was irrelevant, but many of the photographs and film clips were stunning and provided a fair introduction into the world of glam.

A Treasure Hunt, pieces of eight, and a chance to capture...