Over the last few weeks, I’ve come to love this building. I don’t know if I did before, certainly not beyond its beauty.

My own experience was of being dragged around George Henry Lee’s looking for my uniform, never by choice. I’ve heard so many stories of love and adoration for the building, and the memories it’s been a part of, that for a while I started to think they were my own.

But no, any love I have for this building has formed over the last few weeks. I’ve discovered the quirks of the lifts, the shop fittings, the doors; found objects that have been recycled by four different retailers and stood the test of time; but most of all, I’ve learned to avert disaster here.

We started work the week of the festival launch. Six days to turn a department store into a gallery. Now we’re open and it’s day 12, two exhibitions are changing next week, and the end seems to be getting further and further away. But that energy, and constant change in the building that, for my generation, summed up a fairly mundane part of my childhood, has meant that as a festival we’ve become deeply connected to this space. Learned its ins and outs, and feel responsible for the mistakes – however big or small.

Last Monday (9th July) Disparity Collective arrived to plan their space, on Thursday evening, half an hour before the launch event, the lights got working. Their exhibition is about power, and sits in a building that embodies it. Positions of Power, the travelling exhibition exploring what power means today, stands boldly up the stairs as you enter through the beautiful grand Houghton Street façade, with photographs of kids with sticks. Simple enough, but evocative of a primal instinct to defend ourselves.

The day we opened to the public we discovered something rather odd – half the people in the building had spent their afternoon seeing art, but weaving their own narratives around its connection to the building at the same time. Even the Liverpool Hope Graduate Award Exhibition, which sits on the 2nd floor, flooded by daylight through the void in the building’s centre, made up mostly of abstract painting, hit a chord with visitors who were desperately trying to find a connection that was never intended. 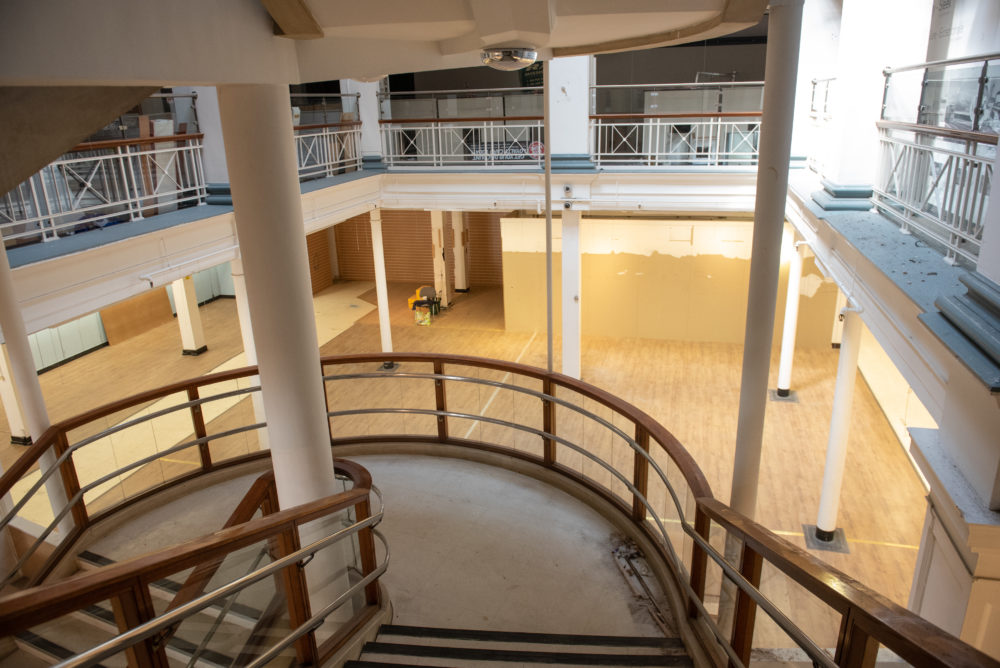 But walking down the stairs, it’s impossible to ignore the history. Signs hang, pointing to cafes that no longer exist, to discounts that have far gone by their sell-by-date, and in their place sits some of the most astounding painting and photography that has been produced in the city for years.

One highlight of my week so far, spent mostly in this building, frantically trying to keep it standing and look its best, was touring around the ground floor exhibition by Tony Mallon with the Big Issue seller who has been asking all week what is going on inside. The exhibition by Tony Mallon downstairs is a deeply emotional response to his experiences working with Crisis Skylight. The images, left luggage, not claimed by any next of kin once the homeless client has passed, are hard to take in. On my way in that day I passed the same six rough sleepers I pass every morning from Lime Street, felt the same guilt as usual, and gave the same apology I always give, and being in the gallery with these works hit really quite hard.

The stories being told in this department store, one that is now inseparably placed in my heart, are ones that everybody can find their own relationship with.

It’s been a privilege to be here, and to remain here even more so. Until the 28th of October this year, we will continue to occupy this grand building with artists who deserve to be here, and deserve a voice within this year’s Independents Biennial. From the 5th August, Empty Spaces Cinema launches a programme in the basement, and the ground floor, 1st floor and 2nd floor exhibitions continue to shift around the building and take on new lives. So if you haven’t been, visit before it’s too late, and if you have, keep coming back and find something new to see.

Even today, I went up to the 2nd floor and found a contribution, left by a local arts group, which will continue to be cherished.