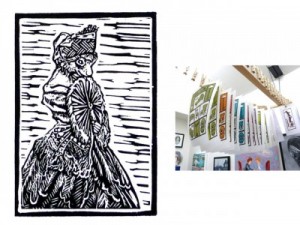 As part of our new ‘Experience’ feature, Art in Liverpool sends writers out to challenge themselves creatively at events and workshops around the city and feedback what they learnt. First up, local artist Breda Whyte got stuck in at one of the Bluecoat Display Centre’s print workshops….

This workshop, run by Jeanne Marie Kenny, started with a general introduction to Lino-printing and a brief history of the technique. For those of you unfamiliar with the term, it is a type of printmaking; a variant of woodcut in which a sheet of linoleum is used for the relief surface. A design is cut into the linoleum with a sharp knife, with the raised (uncarved) areas representing a reversal (mirror image) of the parts to show printed. The linoleum sheet is inked with a roller (called a brayer), and then impressed onto paper or fabric. Our introduction to the technique was reinforced up by the sharing of books and images created by Jeanne Marie, with explanations and clear answers to any questions the group had.

The majority of participants were female with one man who could have felt slightly alone, however, due to the relaxed nature of the workshop I hope this was not the case. We had a very clear introduction to the tools that we would use, in addition to learning about the printing process before we began. What was really great to learn was that this method of lino-printing could be done at home, with no printing press involved. Instead? We used the back of table spoons! 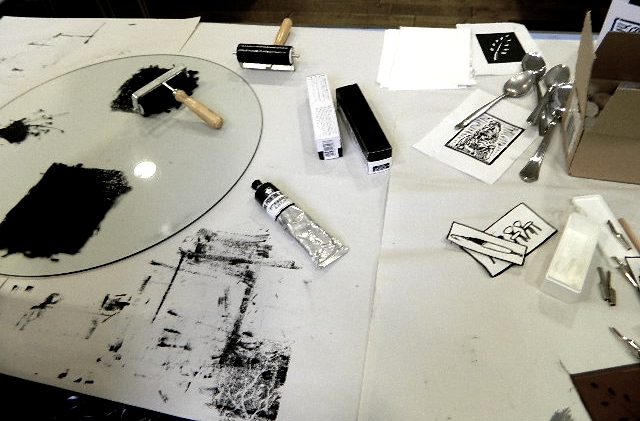 Initially it seemed as if the piece of linoleum we had to work on was very small, but as it transpired, this was a very well thought-out starting point to encourage beginners in the field. The lino was not of a size to intimidate, and this seemed to help designs develop amongst myself and the other workshop participants easily. The piece we were given was also the perfect size for printing greeting cards, and the dimensions of the sheet made working the ink in with the spoon fairly easy. The provision of a template to use as a print-plate holder was great, and the guide-lines were very useful in lining up the card.

Halfway into the session, everyone seemed to become very engrossed in their work, and there was a great buzz of activity with Jeanne Marie and her colleague Kate offering any help that was required, along with useful advice. The lino cutting tools we used were available to buy at a very reasonable price for anyone who might want to take their new skills home with them, and there was an air of generosity in the workshop with Jeanne Marie allowing us to take samples of her beautiful cards too.

Everyone had the chance to do at least two separate images, and to print as many as they wanted or as many as time allowed. Jeanne Marie provided newsprint portfolios for the safe transport of the prints at the end of the workshop, which was another lovely gesture.

This was a great workshop and of benefit to those who have done lino-print before, as well as those trying it for the first time. It was practical and informative, and most of all it was fun. I think that everyone taking part was pleased and surprised with the prints they created, and overall I found it to be a very well planned session. Although it was relaxed throughout, it was very efficiently run and you can find out more about the artist who led the workshop, and future sessions to get involved in here. 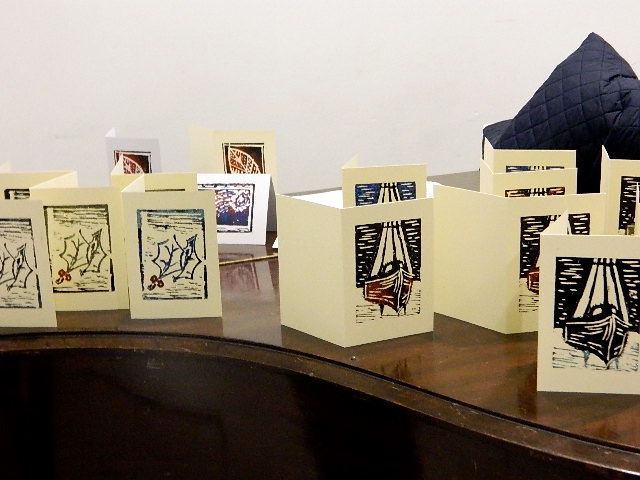