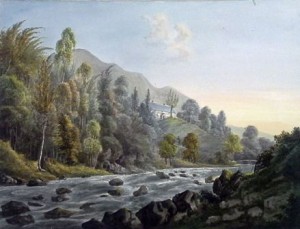 The first thing you will ever be told about Dorothy Wordsworth is that she was sister to William Wordsworth; distinguished, famous and acclaimed poet. Perhaps that is why The Victoria Gallery and Museum make it their mission to give Dorothy a voice; “Dorothy was a remarkable individual, widely read and a significant writer. She was both a muse to and supporter of her celebrated brother, with whom she shared an uncommonly strong bond. This is her story.‌‌”

In keeping with this, the peacefully quiet nature of the VG&M is the perfect setting in which to replicate her silence; it is a perfect homage of imitation. We are told that Dorothy had no ambition to be a writer or a poet; she assisted her brother endlessly, even going so far as to copy out works for him and to aid him in constructing his pieces. It appears that her abilities and talents were almost entirely put towards helping William achieve success. This exhibition therefore prompts the discussion, was Dorothy Wordsworth defined by the life and successes of her brother?

In conjunction with this idea we are drawn to a consideration of the layout of the exhibition itself. For you are drawn to follow her life by following the walls around the room, and yet, positioned in the centre of it is a cabinet in which three items lie; a diary entry in which Dorothy discusses her brother’s impending marriage, and a wedding ring and lady’s handkerchief, both owned by William’s wife, Mary Hutchinson. If the exhibition is a chronologically fashioned, physical depiction of each stage of her life, then allowing its central focus to be her brother’s marriage and his wife is highly significant. It may suggest a possible fixation or unusual jealousy with the role of William’s wife. Indeed the exhibition makes it clear that her commitment to her brother is uncommonly strong; a letter to her friend Jane Pollard states; “My dear friend we shall live over again those days, and we shall anticipate future joys, domestic felicity, peace and retirement, when you visit me and find me united to my dear William.” We are frequently told of the help and support she provided him, both professionally and in caring for his children, and it is noted that she was so deeply unsettled by her brother’s engagement that she did not attend the wedding. 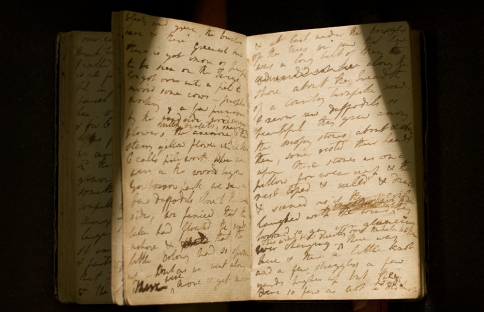 The VG&M perfectly typifies the notion of having a voice not loud enough to be heard; the serene silence of the gallery is interrupted only by the occasional sound of one of the many grandfather clocks. This peaceful quietness houses Dorothy’s letters, her tea cups, the bonnet she wore as a child, the pouch that carried her letters, and much more. Her life is compacted into a matter of square feet. Yet, it is unfailingly hers. Due mention is given to the enormous assistance she gave her brother and indeed to the significantly higher quality works he produced when by her side, but the paintings depicting homes she stayed in, and the letters written persistently throughout her life are hers. These letters not only give her a platform but also a platform in which William is defined by his relation to her. Whilst the exhibition does not ignore her unusually strong dedication to the success of her brother, it does portray her as a woman with vibrant opinions and an exceptional talent for writing. For example, in the opening room of the exhibition are housed a number of her letters, and these are our first indication that her role was not as meek as we may have previously believed. She states of William’s writing; “The scenes which he describes have been viewed with a poet’s eye and are portrayed with a poet’s pencil; and the poem contains many passages exquisitely beautiful, but they also contain many faults, the chief of which are obscurity, and a too frequent use of some particular expressions.”  She takes on an almost editorial role, where her opinion about William’s works fundamentally governs his.

We can without a doubt wonder whether Dorothy’s dedicated and facilitating role as William’s sister and supporter left her in his shadow; as a person defined and referred to only by her relationship with him. We can wonder this, but we would be foolish to. The VG&M gives us her story, it gives us a story where William’s success is totally contingent on his sister’s presence and assistance, where without her his talent was not as we now know it. Indeed the undeniable nod of thanks to her at the end of The Prelude demonstrates his own awareness of his debt to her. The exhibition also gives valuable airtime to some of Dorothy’s exceptional works, such as her Grasmere Journal and most importantly in this case, her letters. In the collection of her letters there is an area towards the end of the exhibition where her last letter is displayed; “They say I must write a letter – and what shall it be? News – news, I must seek for news. My own thoughts are a wilderness.” This drastic change from a woman who was commendably articulate, to one who was terrified by her own senility and frailty is a hugely important part of telling her story, no matter how distressing aspects of it may be. The VG&M act perfectly to provide Dorothy Wordsworth with an honest and admirable voice; she is clearly portrayed as an intelligent and loyal woman, whose talents were graciously put towards achieving success for her brother. And yet, in showcasing her letters Dorothy’s insightful and commanding voice is to be found.

Images: Courtesy of the Wordsworth Trust