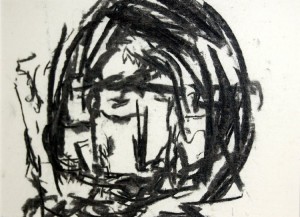 Diane Welford’s Materialising Thought is a highly conceptual exhibition, and relies strongly on knowledge of the artist’s method and motivation in order to be fully appreciated.

What at first appear as simple charcoal sketches, the series Without Objection, become infinitely more interesting when the viewer is informed of their creation: Welford creates each piece in a controlled 3-4 minute sitting, which according to the artist, is the maximum amount of time she is able to block out rational thought. This to me, suggests that during these short intervals, the artist is relying upon pure inspiration and creativity, rather than logically copying a sitting subject, and so the finished pieces are entirely abstract. Despite their organic production, these pieces can be interpreted as definite articles, for example many appear to take a human form, be they faces or bodies. These pieces are an example of Welford’s spontaneity and each represents a totally different creative outcome.

The exhibition also features a duo of works entitled Thoughts on a Surface. A simple concept, these twin pieces are created by a form of engraving paper: a heavy block is used to make an indentation in the paper, and the result is a neat, square relief.

And finally Filter, a collection of works created through the use of light. Although I was unable to speak to the artist directly about her methods, the use of light suggests that she is able to ‘stain’ the paper with light rays to create an impression on the surface. This series of light-produced works is minimalist in the extreme, but somehow remains engaging as the viewer is encouraged to consider how the effect was achieved.

Personally, I found Welford’s work a little too minimalist and uniform, however, I was intrigued by her methods and her mission statement, which included her interest in parapsychology. I would really like to see more of her work, as from research I have discovered she also produces installations, and these would appeal to my tastes more fully.

The exhibition is currently on display at Domino Gallery, off Newington, Liverpool, and will run until mid-October.