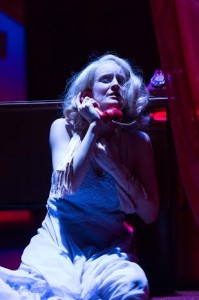 Many will recognise this title as one of the legendary Alfred Hitchcock’s masterpieces of film making.

For one week only, Liverpool Playhouse brings writer Frederick Knott’s crime thriller to the stage, adapted by director Lucy Bailey.

The plot centres around a couple, in the midst of marital problems. Tony (a fantastic performance from Daniel Betts) suspects his wife Sheila (the sublime Kelly Hotten) of having an affair, and when her friend Max (Phillip Cairns) appears after a long trip to New York, Tony is able to piece together their romance with ease.

And so, in true thriller style, Tony begins to plot what he hopes to be the perfect murder, ironically under the nose of crime fiction genius Max Halliday. Roping in old school acquaintance Captain Lesgate (Robert Perkins), Tony devises a crime so devious, that no one could ever suspect him.

Bailey’s production of Dial M for Murder takes a cinematic classic, and adapts it flawlessly to stage. By maintaining the 1950s aesthetic, including beautiful contemporary furniture and costume, Bailey gives a subtle nod to a film which captured the imagination of audiences 60 years ago. It was wonderful to see so many audience members of the older generation enjoying the same story they probably saw at the cinema in their youth, as well as a younger demographic drawn to the sheer ingenuity of this timeless narrative. 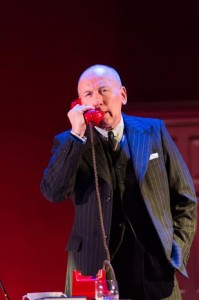 The staging is fantastic, as Bailey uses colour to denote the emotions and motivations of the characters. Deep, rich red is used for the flooring, curtains and lighting, symbolising passion, lust and violence, whilst shadow is utilised to suggest mystery and deception. What is also ingenious about this adaptation, is the decision to stage the whole play in just one room; the set constantly rotates throughout the performance, giving the audience the chance to see the action from every perspective, as well as making us question the loyalties and alliances taking place before us, as the characters are swept about on a carousel of intrigue.

Betts and Hotten as the couple at the centre of this drama work brilliantly together, and their struggle to recapture the spark of their marriage is apparent to all via their body language. I was unfortunately unimpressed by Phillip Cairns as Hotten’s love interest, as his performance felt somewhat wooden, due to a lack of chemistry on set, whilst Robert Perkins is great as the crafty Captain Lesgate.

The star of the show, and who most of the audience really wanted to see, is Christopher Timothy as Inspector Hubbard, the man tasked with solving this complex murder investigation, whilst trying to work out the truth behind the love-triangle. Timothy is charismatic in his role, and plays the inspector with a hint of humour as he tries to trip up his key witnesses with their testimony.

A brilliant adaptation of a much-loved classic, Dial M for Murder continues at the Liverpool Playhouse until 8 March.

Get your tickets for the matinee and evening performances here: everymanplayhouse.com