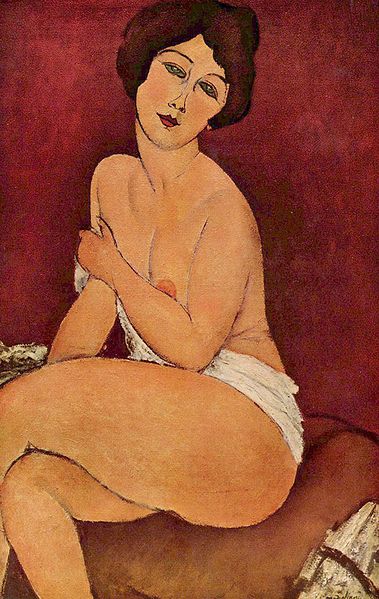 Anna Di Scala, fine arts and artist oil painter has introduced a new series of art and sketches and returned to Parr Street in a one off pop up art exhibition at the Attic on the 22nd June.

I was already aware that part of the exhibition and promotion of her work was based on the “10 Commandments of Coffee”; some sketches were available to buy in various colours, coffee art for the coffee lover. It seems we may have a whole new art genre on our hands, great, I am a big coffee and Anna Di Scala fan. So, it was with a whiff of Parisian sophistication in the air I climbed the steep stairs adorned by pop icons to a small room off the central bar space. The exhibition would have been totally out of place in a coffee chain such as Starbucks or any of the other cloned coffee shops that, whilst producing pleasurable coffee don’t really give you an original experience. By opting for The Attic one can see the advantage of choosing a hip, social living place the artist is freed from a commercial gallery aesthetic. It also provides a more neutral base, spurring a whole art underground, or in this case aboveground cultural space.

The choice of venue may indicate that Liverpool art dealers are moving away from the formality of the art gallery in order to encompass an independence and truth to the art itself. Taking the art to the people implicitly is not a new idea it is a stealth -like strategy, this is no different than the artwork on sale in and around Parisian cafes. Di Scala’s idea of café culture reminded me of the late Scottish artist, John Duncan Fergusson (1861) who on his travels to France produced Parisian watercolour and sketch’s mapping the appeal of bohemia; his work The Paris Café mediates that they are for ideal places for people watching, for chilling out. I did feel chilled out although the small cramped space also mademe anxious, and a cup of coffee would have been nice. There were small espresso cups with coffee beans placed in front of the sketches pairing the familiar visual imagery of the café with nasal cavity senses, for effect, was a nice touch. The sketches had an art nouveau feel about them, the curved lines and typography flowing in asymmetric clarity, the female form a familiar iconic sign used by Di Scala in her oil portraits which in turn are clearly referenced as being influenced by the Italian expressionist, Modigliani. It is hard to completely separate her portraiture with that of Modigliani who died of poor health in 1920 and was a bit of a ladies man by all accounts. Another tortured artistic soul.

Di Scala’s very alive portraits and nudes nevertheless bewitched me, the elongated faces and the serene gaze of her subjects are both sensuous and captivating, her use of colour dazzling even in the poor light of the venue. In
true expressionist style her nudes, like that of Bonnard Nude in the Bath (1941) convey an intimacy and knowingness about their subjects and a bold use of colour. These are female subjects who are confident with their sexuality. The light serving to enhance the female form, as a thing of beauty the face is mask like and flawless, we are denied any form of facial expression thus denying the onlooker complete control. 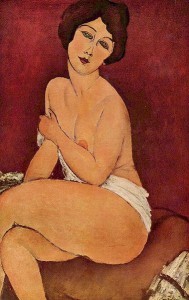 featured with other artists in an erotic art exhibition, her work taking on a more Picasso feel with disjointed female forms fitting in with the deconstructionist feel of the show, I don’t know what I was expecting this time round, a homage to the Follie Bergere with a look-a-like Josephine Baker in a banana skirt? Hard to grasp seeing as though they had the football on in the bar, there would be more chance of a Greek football fan shouting “Eureka”. There was, however, a very striking burlesque woman tin black talking to the small crowd (it was early) and Sebastian, a musician, DJ and friend who guided me through her work and provided the background music, no accordion I’m afraid. He did not get round to telling me why one of the nudes Di Scala had painted had a sequined vagina, quite patriotic it flashed at you like a glam rocker from the 1970’s. I thought this adage was a bit tacky, after all the sophistication of her
work.

All in all, I enjoyed the collaboration and the bringing together of like minds inspired by great coffee, her large portraiture celebrate the female within art history. One commandment co-created with Seba Rashii read “We will dine in
the Paris sunshine with coffee at our sides”, certainly Di Scala’s sketches would not look out of place in a Parisian (or Liverpool for that matter) independent coffee shop or restaurant, according to science women have a more superior sense of smell so with that in mind the latest coffee inspired work should appeal to the female buyer. They should also appeal to the Japanese commercial market as the sketches could be easily reproduced and mirror the love both of the female form and simple flowing lines. More recently, William LeGoullon, an Arizona-based artist and photographer has also inspired by the coffee bean, his project called “Coffee Roasting Phases” was prompted by his experience working as a barista (someone who serves different types of coffee) he has produced a simple composition piece revealing the physical changes coffee beans go through in the roasting process, maybe they should meet up, who knows what work would come of it!