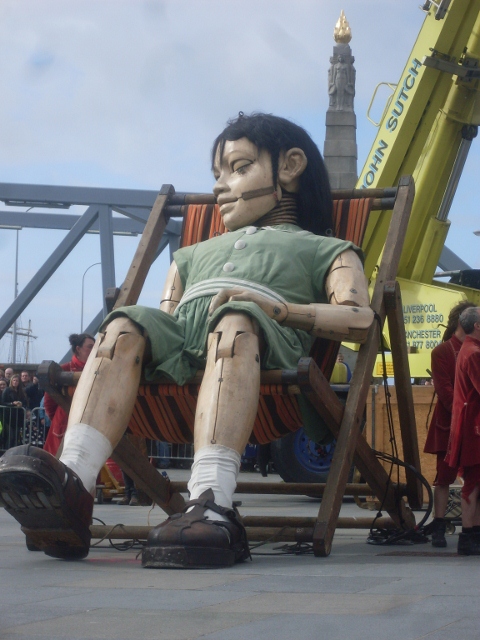 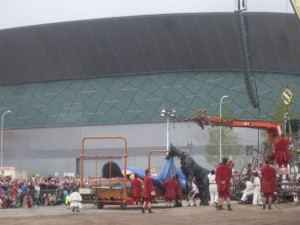 I got up early and set out from my local station, where I met, by chance another volunteer on the platform. We chatted about the giants all the way to the convention centre and another friendship was formed.

Waiting at the side, we watched the Little Girl and Xolo wake up and complete their morning routine. We were amused at the way Xolo lifted her blanket up, stole one of her socks and ran around with it, much to the delight of the large crowd.

Then out onto the streets we went, where large crowds were amassed. The city was filled, seemingly to bursting with people waiting to witness this most amazing and moving street theatre. They were not disappointed as the giants went through their set routines  with the addition of another  action –  today the little girl got on a scooter and rode past the 3 graces to a cordoned off area by the Liver Buildings. Here she spent t 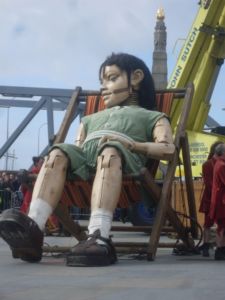 he afternoon resting on a giant sized deckchair.

The fun and camaraderie of the volunteers, crowd and police {who were now bringing up the rear) was infectious.

This day I found myself taking more note of the crowds and the different vantage points they were finding, which in turn focused attention on some of Liverpool’s architecture. I also found myself interested in the work of the Lilliputians who were operating the giants. Each time the little girl was changed, at least a dozen wires were attached, the puppeteers required enormous strength to move each leg and would pull on the rope 3 times before another took over, they also took this as a chance to ham it up and strike a dramatic pose’s for the crowds.

At times it was hard work ensuring the people did not surge into the paths of the giants but it was more than compensated by the unique perspective I got to receive. So when the shout of “blue shirts” came as we neared the end of the evenings journey, I ran past the security into the resting place of the giants. I looked around and saw a vantage point at the far side so legged it across. Here I had the most amazing, magical view of the reunion. I nearly cried when the two giants hugged each other. The crowd were entranced. After the hug the little girl was hoisted up by the cranes so she could have a dance and behind me a group of children laughed, delighted by this.

Magic pervaded the air and anticipation for the events of Sunday descended on me as I made my way to meet my brother for an evening meal in the city. 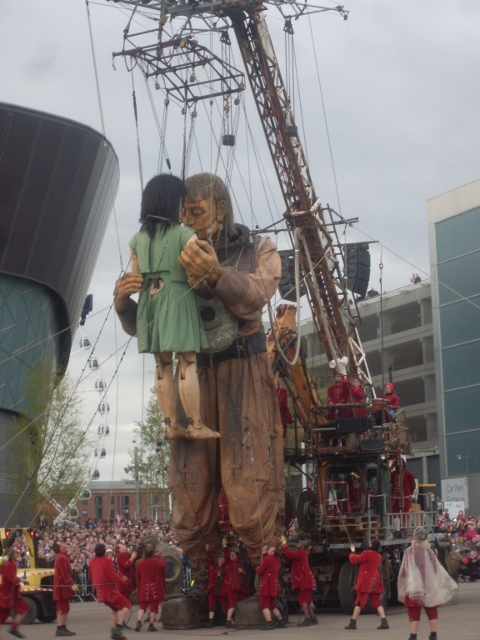