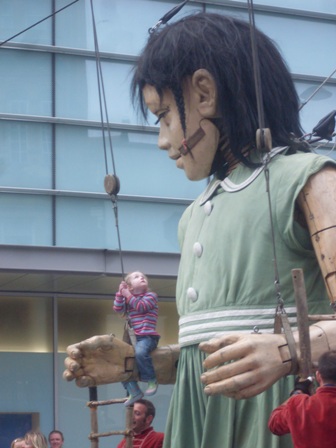 Yesterday as I walked down Parliament Street there was a palatable sense of expectation . People were arriving early and quite a crowd was building up. 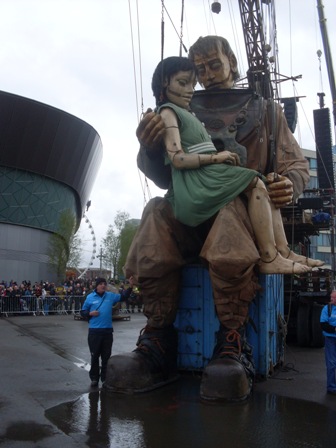 We were privileged to walk around the sleeping area and I was photographed next to the giants. We assembled for a group photo and our instructions for the day.

There was the addition of a cart with a large pair of cymbals and a canon which was to fire a hundred different letters written by school children and community writing groups into the crowds. These letters were written as though they were from the doomed passengers and crew on the Titanic. I was delighted to know a letter I had written was included.

Today we had a much shorter distance to walk and most of the time people were behind the crowd barriers. However we still had to keep our wits about us as moved around, as we had to be aware of areas needing our presence and red hazard tape.

It was incredible being with all the giants and for the first time, for me, with the live music truck, as most of the time it had been with the diver. I still have the waking up tune in my head!

A  few times I ended up next to the boat and got drenched when the waves splashed out much to the delight of the crowds – lucky for me I had good waterproofs on. It was also comforting to me, as a recently early retired librarian, to see people clutching the letters and postcards.

I was able to glimpse the giants embarking on their boat to set off for the Mersey and their final farewells. Then back to the conference centre for lunch.

I was able to reflect on my time with giants. It was amazing to think of the economic impact this art was having on the city. It was timed so people could have plenty of time to eat and shop. There will be a lasting impact as pictures are beamed around the country and world, many taken on a myriad of phones and cameras. 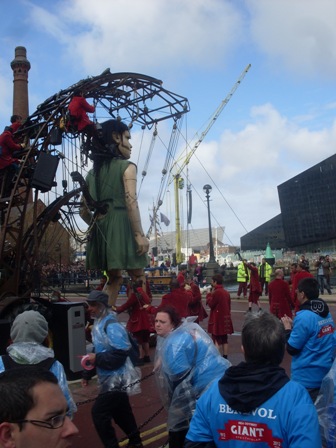 I thought of the impact of having Joe Anderson as the leader of the council with his links to the North of the city and  past as a seaman.  I had read he resigned from the Capital of Culture board in 2007 as he felt there was a lack of community involvement. I think the community was involved  this time especially with the letter/postcard writing aspect.

Most of all I found it hard to quantify and imagine what impact this will have on the sense of community, pride, health and well being of the residents of the city and its environment. I thought of a little girl I saw, in Liverpool One, sitting on the arms of the giant  girl, both of them seemingly gazing in wonder into each other’s eyes. This in a way typified for me the magic of the whole event and who can tell  how the future is now changed for the girl sitting on the arm and for the whole city.

There were a wide range of volunteers having lunch together –  all ages, communities and gender. It was an opportunity to meet similar minded people, enthusiastic and with a joy of the city and its culture. I’m volunteering soon for the Writing on the Wall Festival and I heard last time they trained volunteers for the biennial to show visitors around, so would also like to do that.

This evening I’ve been invited to the after show party at a club in town so think that is fitting way to end my adventures as a benevol steward for the Great Sea Odyssey.

Art of the Lived Experiment at the Bluecoat