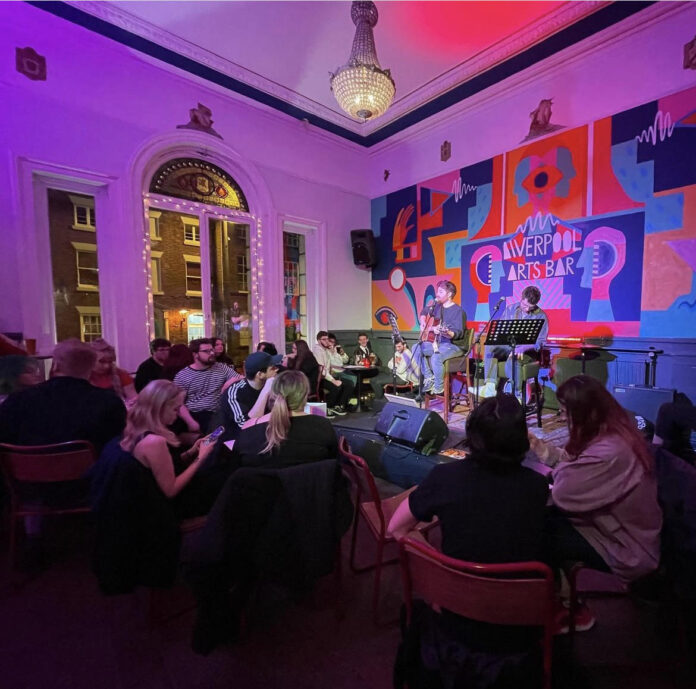 Laura McCann is a curator and artist based in Liverpool, whose latest initiative sees local artist Drink or Draw (aka Tony Winterbottom) exhibited at the Liverpool Arts Bar. Laura McCann reflects on the process of bringing together this exhibition below:

As a curator part of my job is to match artists and their work to venues. So, it might seem a little odd for me to place a recovering alcoholic in a bar but actually it was a very deliberate decision. The artist in question is Tony Winterbottom, otherwise known as, “Drink or Draw” and that alias isn’t a whimsical question, it’s a stark choice that Tony had to make in rehab.

As a teen Tony attended art college but faced with the responsibilities of family life took a different path and he ended up in the high pressured field of sales. He travelled the world, working hard but playing harder and eventually that lifestyle took its toll. Tony’s method of self-medicating with alcohol led him to an addiction that he could hardly admit to himself, let alone others.

When Tony took the huge step of entering rehab, he realised the stakes were higher than  ever before, his life was in the balance. Tony found group meetings a challenge and that’s when he started to sketch. It gave him a way to express himself but also a distraction from the alcohol dependency that had left a huge void in his world.

Tony is now three and a half years in to his sober journey and his pencil sketched portraits that first appeared on Facebook, are now being sold globally and some are actually owned by the celebrities he’s captured on the page. Yet until now Tony had never exhibited and that’s where I come in.

The portraits on display are a collection of musical icons that have shaped Tony’s life and he’ll be in residence to explain what each one means to him. But the question remains, why on earth did I think a place serving alcohol was the perfect venue for a recovering alcoholic?

It’s no secret that in England we view drinking as an acceptable part of socialising and yet alcoholism still carries a stigma. Tony, myself and Liverpool Arts Bar want to send out a clear message, that it is okay to admit that you have a problem with alcohol, or indeed any addiction and there is no shame is asking for help. It’s our hope that people will see Tony’s work, hear his empowering story and realise that there is indeed life after addiction.

Tony’s exhibition launches on the evening of Thursday 17th of November at 6pm and will continue the 18th, 19th and 20th noon- 5pm. Entry is free and the launch is open to the public but you should book if you wish to reserve a table. Bookings are via Liverpoolartsbar.com and you can see more of Tony’s work on his facebook and instagam pages #drinkordraw or follow my pages for exhibition updates on Facebook and Instagram #lauramccannphotos

Kiln Fired Ecologies: Evocations of Natural Forms in the Works of...

Review: Works To Know by Heart: An Imagined Museum at Tate...