In the first major exhibition in the UK for more than fifteen years, Tate Liverpool presents more than seventy works by the celebrated Russian artist, Marc Chagall.

Certainly a coup for the Tate, this exhibition offers a rare opportunity for the city to experience the work of this true modern master. Focusing as it does on the period from 1911 to 1922, there is a journey to take, through the traumatic pre-war years of Paris and Berlin, to Russia, the October Revolution and Chagall’s eventual return to Paris; a journey well documented at the Tate. 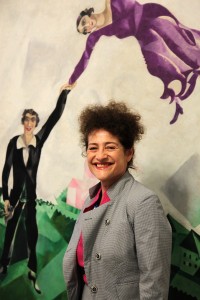 Meret Meyer, Chagall’s granddaughter  commended Liverpool for the way it had brought her grandfather’s work to life.  The carefully constructed phases of the exhibition begin with The Lure of Paris, bringing Chagall from his birthplace in Belarus, as an emerging Jewish artist of note, coming under the influence of the Paris based schools and movements of Cubism and Surrealism

Chagall’s arrival in Paris in 1911 and his intoxication with the life he enjoyed there, saw him immersed in a kaleidoscope of contemporary European arts and artists. Despite the pressures to conform, Chagall resisted for the most part, allowing his own artistic voice to be heard. He reworked many earlier subjects from his Jewish rural heritage and supplemented them with portraits and surreal vistas of Paris, often featuring the Eiffel Tower

As Europe marched relentlessly towards an inevitable war, Chagall was able to take both an opportunity to exhibit 200 works in Berlin, and a decisive step towards returning home to marry Bella Rosenfeld in Vitebsk. The exhibition at the Sturm Gallery in Berlin was very well received and on the crest of this success he arrived in Russia. However his plan to return with Bella to Paris was thwarted by the outbreak of war and the closure of Russia’s borders.

Ironically trapped in his homeland (a three month stay turned into eight years) Chagall continued to work and exhibit in both Moscow and St. Petersburg throughout the war. During these years his work had more sombre elements as can be seen in Departure for War 1914, but his theatrical interest became another outlet for his creativity.

Chagall was now in his 30s, well known and selling his work. The peace and relative calm of 1920, however, had not raised the standard of living  appreciably and by 1923 the Chagall family were on their way back to Paris to resume his career in the city he had come to love.

The exhibition clearly traces the physical and artistic path Chagall followed, with reflective images of Russia and fanciful views of Paris through the Window. There are good examples of his flirtation with different styles before his return to Russia and the dark spectre of War.

Chagall’s love of Bella and his paintings of them both and later with their daughter Ida are both joyous and passionate offering a stark juxtaposition with the dark times they are set against.

Always prominent are the Jewish subjects and motifs that draw on the depth of culture and belonging that Chagall clearly felt to his core and expressed eloquently in so much of his work. They underscore and identify his work and are teased out quite subtly at this not to be missed exhibition at Tate Liverpool from 8 June – 6 October.

As stage designer for the Jewish State Chamber Theatre he created  background murals enlivened with dancers, fiddlers, acrobats and farm animals. Tate Liverpool have thoughtfully recreated the arrangement of the murals as they were originally seen in Moscow.