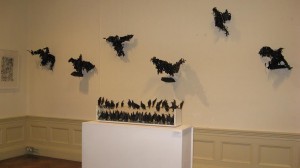 Both artists are exploring aspects of their heritage and background; aiming to conjure up a ‘sense of place’ (Genii Locorum) achieved through representing a combination of nature, man and imagination. Acott uses the subtitle ‘Hiraeth’ which is inadequately translated from the Welsh as homesickness, but includes the spirit of belonging and longing, whilst Whyte’s subtitle is ‘Fréamhacha’ which is related to the word roots in Gaelic.

Acott presents a soft flowing landscape through a series of knitted pieces. The texture, tone and colour of the yarn has been carefully chosen to represent different aspects of the landscape and the sense that she is exploring her environment. The central piece is a dramatic vivid aerial view of the environment under investigation; a mixture of pinks, mauves, reds and purples make up a panorama of ridges and contours (Map). Formed by different knitting stitches, the piece undulates like a hilly landscape which leads to the more gentle scenery of the pieces displayed on either side. Although abstract in form, they are suggestive of ploughed fields and tended countryside. The green-grey of the coastline in one of the landscapes has a soft suggestion of lapping waves and the paraphernalia of fishing boats with the hanging floats and tackle often seen on harbours.

Included in Acott’s work is a series of seascape columns covered in various blue hues. These are also textural, so seem to represent posts that one sees decaying in the sands while the sea, in its many facades, laps and claims the coast.

These works are subtle and aim to create a sense of yearning in the viewer for a place that, although it still exists today, has to be searched for and found. 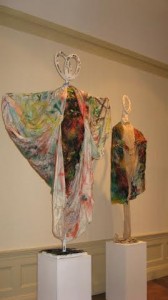 Moving across the Irish Sea to the other side of the gallery the viewer is met by the noble and imposing figures of ‘Requiem for the Tuatha De Danann’, warriors of the mythical God Dano who carried powers of strength and magic. The richness of their colours coupled with the collage of prints, peacock feathers, and photos all serve to create a narrative in the viewer’s mind. On either side of the main figure, representing Ireland, are two contemporary figures. One is that of a pillar containing the bodies of babies; arms, legs and heads straining to reach the surface of the sculpture perhaps in an attempt to be discovered, and represents the remains of the children recently discovered in a mass grave in Tuam in a convent housing single mothers. It seems to me that they are crying out but in a kind of silent torture which brings to mind Francis Bacon’s Screaming Bishop.

On the other side is a representation of the church, covered in a collage of prints depicting puppet masters and other similar images. The modern and the ancient meet, reality versus the romanticism of mythology, unwanted knowledge versus blissful ignorance. These are the warriors of Ireland but perhaps behind them lies another truth; freedom from tyranny may have been won but was it simply replaced by another? I can imagine them striding across the Irish mountains and bogs, noble and righteous, but just as with other revolutions before them, and after, they have been betrayed.

This is an exhibition steeped in mysticism and history. In the Murder of Crows the birds are poised in the air ready to swoop or descend on their prey, conveying a dark and mysterious image. Their figures, made up of recycled aluminium, are caught in mid-flight portraying movement and darkness. ‘Watching, Waiting’ brings to my mind Hitchcock; the crows have come together, are communicating with each other, and are ready to act as one. The intriguing use of origami, a ‘friendly’ craft, is in stark contrast to these ominous structures, while the broken glass alludes to sinister superstitions and depicts the fragmented images to infinity.

The mixture of screen prints, lino prints and acrylics are impressive, and viewed alongside the rest of her work, they come together to suggest an artist in full possession of a range of skills. Related to legends and traditions, all have a quality of other worldliness about them. They immerse one in their lore, thus inspiring the viewer to pore over each in turn and invent their own narrative.

Whyte has created an exhibition that manages to make the viewer feel that they have walked through the gate to another world. It needs to be seen.

The exhibition continues at the Williamson until 12 October 2014. Find out more here