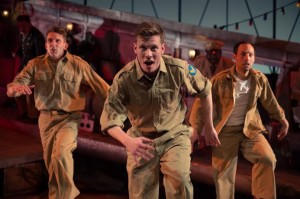 Catch-22: If you’re crazy, you’re not fit for combat; but admit it and the doctors know you’re sane, and you’re sent back out to fight.

Damned if you do, damned if you don’t. This is the reality B-25 bomber pilot Captain Yossarian (a fantastic and moving performance from Philip Arditti) is faced with 55 dangerous flight missions into World War II. Trapped in a world of contradictory orders and double meanings, his team of bombardiers struggle to make sense of their situation, and to keep the balance between what duty dictates, and what they know to be just.

Catch-22, based on Joseph Heller’s iconic 1961 novel is presented by Northern Stage at the Playhouse. The story is at once complex and simple, a commentary on the toxic impact capitalism has on human intent, relentlessly critiquing the power-hungry and dim-witted authorities coining these nonsensical rules.

Christopher Price as Milo Minderbinder, the barracks’ one-man stock exchange embodies this idea of ludicrous capitalism, as he apishly repeats his mantra of “what’s good for the syndicate is good for the country”; a line clearly stamped on his consciousness from superiors intent on war profiteering.

The doubleness of bureaucracy is best captured in the guise of Major Major (David Webber), whose very name suggests the ridiculous paradoxes facing men at war. Ever keen to avoid confrontations and anything like hard work, the major makes several hilarious bids for freedom from his office window throughout the play, in an act that typifies the authorities’ lack of concern for the men on the front line.

The play explores paradoxes not just of military life, but adult life in general. Characters find themselves swept up in absurd and frantic dance numbers as they engage in serious and life-changing conversations, whilst seedy goings on at local brothels and clubs are realised in miniature in the wings of the stage. Just visible, these vignettes of chaotic war time life on the fringes of the action suggest the madness looming ever closer to Yossarian’s band of brothers.

Fantastic performances include Christopher Price as the Texan, Geoff Arnold as the sympathetic barrack Chaplain and Michael Hodgson as the hilarious and repulsive Colonel Cathcart, whose Monty Python-esque movements and expressions serve to portray the ludicrous hierarchy which exists in this world. Even in moments of the darkest, most extreme caricature the incredible script and acting talent are able to strike a nerve with the audience and resonate with Yossarian’s plight. Simon Darwen as the harbinger of doom cries out to the men from a crackling microphone at the side of the stage, detailing their next dangerous mission whilst crudely swinging a baseball bat…“its Bologna boys! Bologna!”

This overall feeling of madness and danger is enhanced by the production’s incredible soundtrack and lighting directed by award winning designer Charles Balfour.

Witty, fast-paced and darkly comic, the script is the definition of satire. With a stellar cast, well versed in the laws of comic timing and easily gliding between the multiple roles each actor embodies, the show is a sure-fire hit and set to get audiences thinking about the real dangers of war and power.

Catch-22 continues at the Playhouse until 31 May 2014. Find out more and book your tickets here.