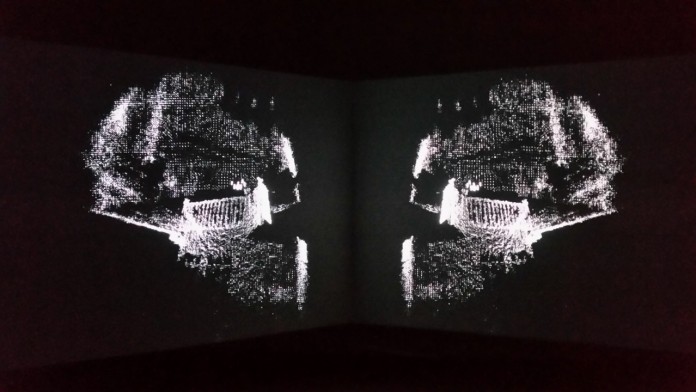 The latest exhibition of work by experimental collective Brass Art – made up of Chara Lewis, Kristin Mojsiewicz and Anneké Pettican – at International 3 gallery in Salford explores the London home of renowned psychologist Sigmund Freud. Using Kinect laser technology, similar to technology commercialised through the Xbox games console, Brass Art have digitally dissected this domestic space in an exploration of its hidden layers.

Fleeing Nazi occupation of his home town of Vienna in 1938 Freud moved, along with his wife Martha and daughter Anna across the continent to London. 20 Maresfield Gardens in Hampstead, North London, became their home and Freud’s consulting room in Vienna was recreated in meticulous detail, allowing him to continue seeing patients until the terminal stages of his cancer. This theme of mirrored rooms – the consulting room copied in London – is strongly displayed in Brass Art’s installation. Upon entering the small gallery space you meet a projection on two screens which stand at right angles to one another, mirroring each other. Like an enormous open book, the convex display embraces us as we enter.

Enhancing the enveloping effect of the darkened room and convex display, the electro-acoustic composition by musician Monty Adkins gives body to the pixellated, black and white skeleton visible in the projection. As the artists whisper, their voices are layers in a discordant choral sound, punctuated by the sounds of very domestic movement. We see figures in the projection, moving round in domestic scenes in liminal places. Staircases, hallways; we are often unsure which room  the figure occupies and exactly the movements they are making. We see a figure dancing with another: her skirt sashays with every movement. In the intimacy of the movements performed by Brass Art in their investigation of this space we are afforded a voyeuristic position, however uncertain it might seem.

This is further distorted by the fragmenting quality of the Kinect laser technology manipulated by Brass Art to create this work. Working by capturing the light bouncing off one side of an object, the laser registers where objects are in space. In the limits of this technology, the resulting video is shaped as much by what the camera does see as what it doesn’t see. Brass Art rely on this as a vehicle for a sense of the uncanny and an implied narrative. When the data collected by the Kinect laser is projected in this way, the appearance is of shadows and when transformed into three dimensions the data creates an extreme sense of light and dark, appearing to bisect rooms and peel back walls, floors, ceilings. Like a noir film, light coming from only one direction exposes only part of the scene, drawing attention to the features which become central to our narratives: stairs, a figure, or perhaps two.

Commissioned by the University of Salford as part of the Commission to Collect programme, Shadow Worlds | Writers’ Rooms – Freud’s House explores two of the three foci laid out by the scheme: ‘about the digital’ and ‘from the north’, reflecting contemporary issues important to the  University of Salford. The programme seeks to support artists who live and work in the North of England and not only are the three core members of Brass Art based between Manchester, Glasgow and Huddersfield but together they have worked across the North of England on several projects during their career thus far. The digital focus of the Commission to Collect programme reflects the University of Salford’s presence at MediaCityUK, and their investment in advancing technology in the arts and culture sectors. What is important and special about Brass Art is not necessarily their experimental use of technology – after all that is nothing particularly new – but a sense of cataloguing and collecting digital work, expanding the archive beyond the analogue. This resonates with the qualities of Brass Art’s latest project Shadow Worlds | Writers’ Rooms. Using the digital to explore and to expand our understanding of the real world, they experiment with different technologies and use them creatively to expose nuances that would otherwise go unnoticed.

A figure  moves around the shadowy space, punctuated by features in relief: the edge of a table, an outline of the bannister. The feeling this creates is eerie & ghostly, reinforced by the grayscale projection. Devoid of colour, the shadows become representative of something more than the objects that have created them. Once we have oriented ourselves in the twisting movement of the camera and the shadowy relief of the projected space, we begin to make sense of the moving figures; the domestic movements and the rhythmic and cyclical nature of the projection’s repeating ebb and flow. In using the Kinect technology Brass Art have achieved a sense of the uncanny and imply that there is more there than is seen. This mesmerising and hypnotic display is accentuated by the double digital installation, projected onto two screens set at a right angle to each other. The projections, mirroring each other, converge to create their own patterns. In the chaos of the individual screens and seemingly fragmented navigation, new images emerge as the mirrored screens work together. As a result we are reminded of the parallels between Freud’s consulting rooms in London and Vienna.

Brass Art’s investigation of being resident in a place, and the residency of others reveals as much as it hides. In experiencing Freud’s House through their work, I have uncovered less about Freud himself and more about the nature of the place; everyone and every thing leaves its mark on a place in an ongoing cycle of influence. Just as Brass Art respond to layers of marks left in 20 Maresfield Gardens they too contribute to these layers of experience as they are resident there.

They influence the space of Freud’s house just as much as the space influences them. In being resident there, the everyday domestic tasks that they perform in the space; communicated through video, feel natural rather than forced and you wonder if it is indeed Freud’s ghost we are seeing. What Brass Art’s investigation uncovers draws you in but leaves you spinning.