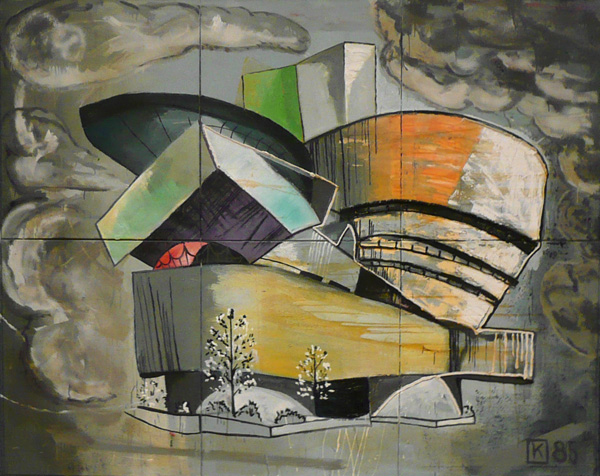 Within Tate Liverpool’s new exhibition An Imagined Museum hangs Martin Kippenberger’s large oil painting The Modern House of Believing or Not (1985). Kippenberger’s anarchic sense of humour and irony are evident in his apocalyptic vision of the Guggenheim in New York. Swirling dark clouds engulf the pallid museum, which appears to be bloating and rupturing before our eyes; it’s monumental but oddly lifeless. If Frank Lloyd Wright’s museum wasn’t so recognisable, it could pass for a fucked up multi-storey car park in Stoke.

The fictional premise of An Imagined Museum, which brings together contemporary works from Centre Pompidou, Tate and Museum für Moderne Kunst (MMK) collections, is that the exhibited artworks will permanently disappear; it’s up to the audience to memorise them to keep them alive. Inspired by Ray Bradbury’s dystopian novel Fahrenheit 451, the final weekend of the show will see individuals and groups recounting/performing their own subjective interpretations of each work, set in the year 2053.

It’s pertinent futurology. In the latest edition of Frieze, Sam Thorne invited ten international arts professionals to speculate on the museum of 2030. Tracing a long tradition of speculating on the future of arts institutions, Thorne’s question, naturally, drew a myriad of responses, demonstrating positivity and scepticism in equal measures. Earlier in the year Tate’s own magazine conducted a similar survey ahead of An Imagined Museum. While several key issues emerged, such as increasing globalisation, inclusivity and harnessing the power of technology, both articles highlighted the rapidly shifting dynamics between the institution and its audience.

Standing in front of Kippenberger’s literal dismantling of the institution, one cannot help but consider its role in circulating artistic images to wider publics. The strength of the artwork within An Imagined Museum is undoubted (it’s always a joy to see Chris Marker’s seminal La Jetée (1962) within a gallery) and represents a powerful, if occasionally disparate, collection of canonical post 1945 artworks. Yet, is Kippenberger, who fostered a tempestuous relationship with the art world during his short lifetime, critical towards the rise of the globalised institution that, as Yilmaz Dziewior pessimistically proposes to Thorne, becomes more renowned for its architectural shell and corporate muscle than its artistic content?

At a time of decreasing funding, the marginalisation of arts education and the importance of making the economic and societal case for culture, An Imagined Museum is a rallying cry for our cultural institutions rooted in reconfiguring the boundaries between audience and institution. Kippenberger’s droll canvas is a silent arbiter; a reminder that cultural institutions exist for human engagement.

Review: Skywriter: Vs vs Stephen Poleskie