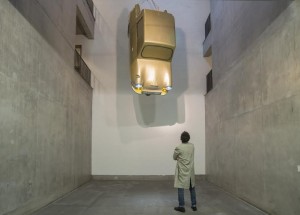 The current exhibition at the Bluecoat, curated by Aaron Williamson, brings together the work of 29 British and international artists. With a concurrent theme of alchemy, Art of the Lived Experiment addresses the idea that both art and life are continuously evolving and transforming. This exhibition is part of the DaDaFest, an organisation that promotes deaf and disability arts through a bi-annual festival, encompassing visual arts and performance.

The first work in this exhibition, located in the vide space, is a strikingly hung Invacar made by Tony Heaton. An Invacar, also known as an ‘invalid car’, was given to disabled people during the 1960s and 1970s to enable them to travel easily, however, these cars were hollow and made out of fibreglass, with a maximum speed limit of 28mph. As well as these cars being incredibly dangerous due to their construction, they were also impractical in their design;the Invacar had a one-person limit and due to their speed restrictions were not allowed on British motorways. In 2003 they were banned from British roads. For the DaDaFest exhibition, Heaton has sprayed the Invacar gold – the colour most associated with alchemy – and suspended the vehicle vertically in the air. The overall effect of this display is awe-inspiring; visitors can freely walk under the car and examine it from all angles. Whilst the title of the work, Gold Lamé, refers to the colour of the car, it also plays with and reclaims the word ‘lame’ which has been negatively used to describe people with physical disabilities. 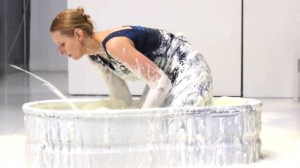 The first gallery space has been given the appropriate title of the Ignition Room: the initial spark that ignites the theme of the exhibition. There is a strong link throughout this exhibition between ‘the lived experiment’ and alchemy. Amongst the most eye-catching works in this room are Leaded Light 1 and Current by Adam Reynolds. Made in 1969 and 1993 consecutively, this installation is made up of a dangling light bulb and a water tap, both of which have been transformed into a “worthless lead or copper” instead of a precious gold. The transformation of these ordinary objects can be seen as a subtle metaphor for the devaluation of disabilities within society.

Some of the most interesting and memorable works for me in the second gallery space are Anna Berndtson’s video works Churned and Duckie, and Mike Parr’s charcoal drawings. On the opening night of Art of the Lived Experiment, Parr did a dramatic performance by painting over his beautifully drawn charcoal on paper works, covering them completely in black paint and obliterating any trace of what they once were. This process of altering the work after it has been fully installed is very interesting; it very much signifies that the creative and artistic process is ongoing and that the work may forever remain in flux, being subject to various changes by Parr’s intervention. 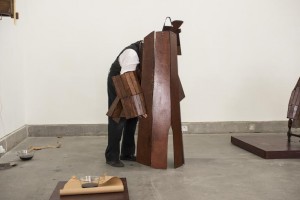 Another of my favourite works in the second gallery space is Human Birdwings by Floris Kaayk. This four-minute fictional video shows a man operating engineered mechanical wings designed for human use to enable flight. The ability to fly is a dream that we have all had at some point, and this video extends the limits of human ability, enabling the body to achieve what it could not without technology. Human Birdwings encourages the viewer to consider enhancing our bodily limits through technological modification as a positive thing, which in turn will aid to cease the stigmatisation that still exists in today’s society towards disabled people.

The upstairs gallery space is home to the installation Antix 2 by Brian Catling. On the opening night of the exhibition, viewers saw Catling moving through the gallery space and interacting with the objects on display. If you happen to visit when the artist is not conducting a performance, an eerie atmosphere exists in the darkened room, as the props used as part of Catling’s performance are left idle: chairs with coats draped over them emit a haunted aura of a human presence in the space. 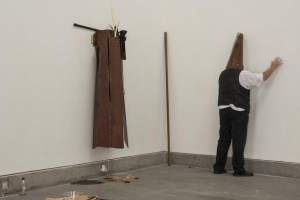 DaDaFest seeks to deliver excellence in the arts, and has achieved this feat with the exhibition, which incorporates sculpture, performance, painting, prints, and installation. The underlining theme of ‘the lived experiment’ and alchemy is well chosen and reflects the ethos of DaDaFest: living life with creativity, imagination, and innovation.  There is a debate surrounding disability arts as to whether an artist’s disability should be acknowledged or discussed in their work – is the artwork defined by that disability (in its physical or contextual form), or should the work be judged on its own grounds? For me, it is unnecessary to be aware of an artist’s disabilities as it is the quality of the work that matters, however, through the effective curation by Aaron Williamson, the viewer gets a sense of the artist’s background without giving any actual biography or relying too much on their status as ‘disabled’ to present great art.

This exhibition continues at the Bluecoat until Sunday 11 January 2015. Not-to-be-missed performances by Brian Catling tale place on Tuesday 2 and Wednesday 3 December, and Thursday 8, Friday 9 and Saturday 10 January 2015. See the Bluecoat’s website for more details

Review: All That Glitters at Bluecoat Display Centre