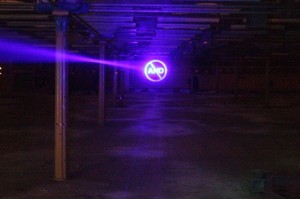 Abandon Normal Devices, better known as AND Festival has graced the galleries and public spaces of Liverpool for another year, and this year’s ANDFair was not to be missed! Art in Liverpool spent a whole day at FACT soaking up the creative technology and innovative ideas brought by artist from around the world to our city’s Creative Technology hub, and here are some of the highlights…

As I parked my bike up behind FACT’s cafe, I noticed a marquee housing a collection of weird and wonderful artistic experiments; the De-Extinction Deli immediately caught my eye. Unbeknownst to me, and probably most of the population, top scientists have been working hard to de-extinct certain forgotten species of animals. The process, known as ‘De-Extinction’ is defined as ‘creating an organism which is a member of, or resembles, an extinct species’. Scientists working on this highly debated and controversial issue, have actually succeeded in bringing back the extinct Pyrenean Ibex. Using frozen DNA from a once living animal, scientists managed to clone the once-extinct Ibex, bringing the animal back to life for 7 minutes in 2009. 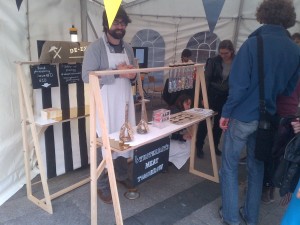 As well as explaining the complicated science involved in this process (there are 3 ways to achieve de-extinction: back breeding, cloning and reverse engineering), the stall at ANDFair today was interested in gauging public opinion about this topic. Everyone was asked the following questions: Should scientists proceed with this experiment and bring back extinct species? And if possible, should we be allowed to use these animals for food? and by passing out a variety of coloured, animated badges to illustrate public opinion, the crowd at the fair became a live map of debate.

Another interesting technological debate was happening at the Accept Cookies Stall, run by artist and tech guru Ben Dalton. Dalton invites his audience to bring along their laptop or other mobile device, which he can then use to upload and view their user cookies. Cookies is the data stored about you relating to the sites you browse when online, and Dalton can then make this data physical in the form of a tasty treat. The end product is your personal cookie ID, which can be eaten, thus rendering you anonymous. Follow Ben Dalton on Twitter @noii 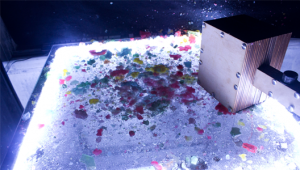 Next up, was the opportunity to use a LightHammer with artist Andrew Goodman. Before using the hammer, I was given a lesson in ‘Lightsmithing 101’ with the artist himself, who has set up shop in the FACT foyer with a dark room and camera equipment. Lightsmithing is an exploration of the photographic process which using a light emitting instrument to generate images. The resulting images are fantastical realisations of the image-making process in which the subject is violently destroyed by the very act of portrayal. Lightsmithing is also a lot of fun. I was led into the dark room and handed the LightHammer, which is a heavy instrument with a choice of functions on the handle. After selecting my subject and light colours that I wanted to use, I was then invited to smash my subject with the hammer to create an image. With a flick of the wrist and the force of the hammer coming down on the specially designed box encasing the camera, a photograph is created and relayed to the artist’s Mac. Look out for my image on the website soon!

Lastly I took part in Headspace: a project run by scientists and doctors from Alder Hey Children’s Hospital with the aim of capturing images of the skull to investigate how and why people have different shaped skulls, and how this investigation can benefit medicine in the hospital. More information about the project can be found at http://www.alderhey.nhs.uk/take-part-in-our-headspace-project-and-change-lives/

AND Festival continues at FACT until 6 October 2013