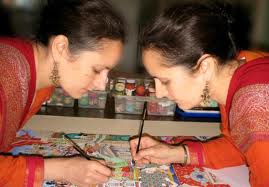 of International standing whose award winning paintings have been acknowledged as constituting a unique genre in British Art and for initiating a new movement in the revival of the Indian miniature tradition within modern art practice. Describing their work as Past – Modern (as opposed to Post Modern), their work engages with important areas of critical debate – challenging existing stereotypes and redefining generally accepted, narrow perceptions of  heritage and identity in art and society.  Art Feast Recently caught up with the twins to talk about their work and their views on the Liverpool Art scene

Your work is highly decorative and there is a beauty to the debate contained within it, How important do you think challenging the ideas of existing stereotypes and exploring cultural, social and political issues through art is?

For us, it’s extremely important. Our upbringing was such that we were always encouraged to stand up for what we believed in. And many lively debates, about all sorts of issues, took place at the dinner table. But, it wasn’t until 1985-87, during our BA (Hons) degree studies – when our chosen style of artistic expression inspired by traditional Indian Miniature painting was criticised by the Art department as being “backward and outdated” and having “no place in Contemporary art” – that we began to use our art to respond to the cultural prejudice we faced and to expose the hypocrisy of a contemporary art world (and in our experience, society in general) that emphasised the importance of free expression and individuality, but yet, was so narrow minded and Eurocentric in its outlook.

Ever since then, we’ve continued to use our art whenever possible, to challenge negative cultural stereotypes, to try and break down the cultural divide that still exists between East and West, and for social/political commentary.  We feel that such challenges (whether made through art, or otherwise) are important because they help to raise awareness, create debate and dispel ignorance about issues that are the root cause of so much cultural prejudice and suffering in the world.

Do you think art can be as important in a debate as vocalising the issue?

Definitely. We’ve always believed in the power of art to communicate and comment on universal issues that affect us all – rather than just being obsessed with expressing the inner ‘self’ or emotions of the artist.  And history has proved this to be the case time and again, when those in power have used propaganda art, with great success (often with devastating consequences) to gain political advantage and public support. Personally, we feel that art can be more effective than vocalising because many different issues and points of view can be covered, simultaneously, within a single image in a way that is not always possible when debating vocally. Also, because of its visual appeal, art has the potential to draw in and reach much wider and diverse audiences across different ages, genders and cultural backgrounds. Furthermore, particularly where the use of satire and humour in art is concerned, one is able to communicate hard hitting, serious issues, in a manner that might otherwise be perceived as threatening  coming from a speaker.  So there is less chance of your audience being turned off from the message you’re trying to convey.

You work closely together on your work, there must be times when you disagree on the best route to take?

To be honest, because of our identical upbringing and experiences, political/social outlook and shared values, we are very much in tune with each other in terms of our ideology and goals as artists.  So, we rarely disagree on the big issues such as what theme to deal with or how to approach that.  If anything, it tends to be the minor things we disagree about – like, for example, what colour to use in a particular detail in a painting.

You produced the film The Making of Liverpool, how has this been received?

The animation has been received really well, wherever it’s been screened. And, given its specific Liverpool focus, it has been particularly rewarding to find that audiences who have no connection with the city  – even as far a-field as India – have loved it too. We’re really proud that it won a ‘Creative Media Award’ at the Spinning Wheel Film Festival, Hollywood and was also nominated for the ‘Short Film Award’ at the Tongues on Fire Film Festival, London.

Our heads are full of ideas for future films we would love to make. But, as is always the case with the Arts, funding is the main stumbling block! However, at the moment we are talking to the gallery who hosted the premier screening of The Making of Liverpool in India last year, since they are really interested in backing a similar animation – this time, narrating the history of Delhi.

How do you find Liverpool as a city to work in ?

Generally, although it has not been an easy ride, we have on one level found Liverpool to be a great city to work in – with our first ever gallery exhibition being hosted by the Bluecoat, a major solo exhibition at the Walker, acquisitions of our work by NML and public commissions for 08. And we have been very fortunate to have met some really supportive people within the city who genuinely appreciate and are enthusiastic about improving the cultural heritage and potential of the city and supporting its artists. But we are not sure if that experience is shared by other artists. And from our own point of view it has been quite a struggle on other fronts to get certain city promoters to recognise the value, importance and contribution of the city’s arts and artists, as well as the cultural groups and organisations working in and for the city. With the number of galleries, museums and cultural festivals Liverpool has and with the kind of support we have personally always found from other quarters such as BBC Radio Merseyside, Liverpool Echo and Post and webs sites like artinliverpool,  Liverpool certainly has the foundations for a great place for any artist to work and raise their profile.

With all the funding cuts  Do  you feel Liverpool as a city is doing enough to support its artists ?

Unfortunately, we feel that funding cuts have taken their toll on artistic and cultural opportunities within the city and the city is perhaps in a genuinely difficult position in terms of their ability to support artists and its cultural heritage but we also feel that the enthusiasm for art and culture which we found in the lead up to and during 08 year has fizzled out somewhat. It seems to us that it’s not just a case of lack of funding but a change perhaps in the political agenda and priorities of the city? There appears to be a lot of talk about the need for Liverpool to promote it’s cultural, educational and business offer overseas, particularly with developing economic giants like China and India but a lack of vision or faith even, in how artists, art and culture can help realise the economic objectives of the city – which in our opinion has the effect of cutting artists out of the equation and being overlooked by a decision to concentrate on a more corporate approach and focus for promoting the city.

You recently exhibited at the national portrait gallery in London offering a contemporary response to the major exhibition The Indian Portrait: 1560-1860, did this exhibition make an impact on the development of your work ?

No, because that solo exhibition of our work, which ran alongside “The Indian Portrait’ show at the National Portrait Gallery, was a selection of existing works from our International touring collection and was a response to individual pieces within the Indian Portrait show – i.e. rather than a body of completely new works inspired by it.  However, the fact that we even had the opportunity to exhibit at such a prestigious venue in the heart of London, was, we feel, a mile stone achievement in terms of our general development and goals as artists who have spent the last twenty-five years trying to get recognition for our work within the main stream. We’ve come a long way since being ‘politely’ told by a certain well-known London contemporary art gallery (after approaching them for an exhibition) to try the ethnic gallery down the road and, on another occasion, being dismissed by the BBC producers of a national televised art competition in the late 80’s as “too culturally different to be considered alongside the other entrants” – despite having already been put through to the Finals by the judges!

You have been included in the Oxford Encyclopaedia of Women in World History This must have felt overwhelming?

Yes, it certainly did – especially when you consider how many millions of women are out there that have made an impact in the world in so many different fields. Again, like the NPG exhibition, being profiled in such a mainstream context, represented another tremendous step towards fulfilling our personal aims as artists and further establishing the value and rightful place of traditional and non-European art forms within contemporary art practice.

George Henry Lee’s: A note on getting to know a gem