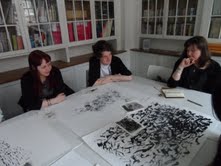 The Art Club took a slightly different direction last week from our usual format of meeting in a gallery and picking a small number of art works, followed by an informal and relaxed discussion, and was given a new twist when Double Negative’s artist of the month Jon Barraclough was invited to come along.  The Bluecoat kindly let us use their library, and from the start we knew that this was going to be a meeting with a difference when Jon brought along a range of sketches that he had not shown in public before.

Jon, amongst other things has worked in New York and London, produced graphics for the film industry (including The Last Emperor by Bernardo Bertolucci and Insignificance by Nicholas Roeg) before eventually moving to Liverpool.  Here he set up a collaborative arts and consulting practice, Jon Barraclough and Company, and is now working with The Royal Standard in addition to carrying out teaching, consultancy and co-publishing the Drawing Paper.

But, as already mentioned this was not a conventional artist talk and once he had briefly introduced himself Jon took the plucky decision to show a body of his unseen work and invited us to offer a critique of his art.  The drawings were placed across the table allowing us to examine them more closely, he even let us touch them – a privilege that all art lovers will envy!  These abstract drawings portrayed a delicacy and lightness of touch that gave the images a certain fluency and purity.  The elegance of Mervyn Peake’s illustrations came to mind, and although in monochrome, the art of Japanese prints as did the work of Kandinsky.

Music has been a great inspiration in Jon’s art generally and he has produced art in public using music as the stimulus.  But these beautiful drawings have been created in private; Jon explained how he listens to music and lets it seep into his mind and bring to the fore his subconscious which, having been reached, allows his inner artistic creativity to emerge.  The drawings reveal a depth of emotion and imagination; they are not literal or descriptive drawings but purely abstract created in the moment.   They cannot be reproduced as the same music will arouse fresh reactions each time it is played.

The conversation was absorbing and enjoyable.  We discussed how Jon could exhibit these works and agreed that they should be viewed initially on their own so that the viewer could explore and interpret them in their own way.  After that the viewer would move into a separate video room screening a film of Jon creating some of the drawings to music thereby adding a further dimension to the exhibition.  The group were curious and intrigued to hear what music had inspired each drawing so we played a sort of game where we listened to various pieces of music and guessed which artwork was linked to which piece of music, only to find that most of us differed in our guesses.  An earlier debate amongst the group raised the concern that the presence of the music may interfere with the appreciation of the art and possibly detract from it but this did not in fact happen. Instead the music seemed to generate a feeling of other-worldliness to the drawings enhancing their complexity.  However, perhaps more surprising was that our personal interpretations of the drawings were sometimes altered by the presence of the music which possibly served to reinforce the idea that these drawings are very much of the moment; the moment in which they have been created and the moment in which they are viewed.

A short synopsis like this cannot begin to give credit to the range of discussion that was generated nor can it truly convey how inspiring and thought provoking the meeting was but in an attempt to give a flavour of the meeting here are some of the comments that were left by the group on their feedback forms:

“Jon was great.  I could listen to him all day.”       “I really enjoyed the fact that the artist was present – added a new dimension to the work.”  “I really enjoyed the way Jon related to the group and became part of the conversation.”  “Being a reluctant drawer I need to go home and draw.”  “It was lovely being able to see work that is not normally on show, to develop our thoughts on them and the potential for displaying them in different ways – building on ideas from previous Art Clubs.”

Jon said the he felt the experience had been a very positive one for him and that he would definitely consider exhibiting these drawings in the future.  The Art Club would like to thank him for his time and willingness to discuss his work so openly.

Jon also suggested that he comes back to the Art Club to run a drawing conversation and music session for us at a later date – can’t wait!

If you want to know more about Art Club or would like to come along to any of our meetings please contact either Shelagh Cullity (shelaghcull@yahoo.co.uk) or Andy Johnson (andrewjohnson5@sky.com).