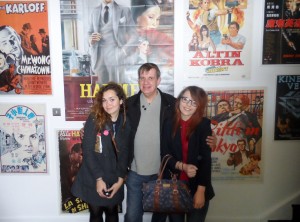 As people know who read my occasional posts on Art Feast I’m a recently retired/redundant librarian looking for interesting things to do and write about. I have an interest in contemporary art so applied for and was accepted as a volunteer for the Biennial.

I have really enjoyed my time working as a volunteer. It’s been great gaining a greater understanding of the art, developing my confidence in meeting and engaging with people and getting involved with events including setting up an Art Discussion Club. One of the things I’ve really enjoyed doing is conducting tours around the biennial with groups of school and college students.

When I was asked on Monday evening if I could show a Chief Executive Officer of an important art funding organisation around some of the biennial I jumped at the chance.  I reported to Copperas Hill the following morning at 9 and welcomed her in along with a representative from one of Liverpool’s strategy companies. It was good showing her around Copperas Hill although time was short and not all of the art was to her taste. Afterwards, however,  she was impressed with the lift on the edge of Liverpool One and was absorbed watching John Akomfrah’s film about Stewart Hall in the Bluecoat. She had important meetings to attend to and I was left at 10.30 with the rest of the day on my hands.

While enjoying a cup of tea and chatting to my fellow volunteers at the Bluecoat hub, two young women came in and were given free copies of the Biennial book.  One of them, Charlotte Emily, had entered a competition with a London gallery to come up with a performance art piece on the theme of hospitality. She was the winner and had won an all-expenses-paid trip to the Biennial. I was asked if I would like to be their tour guide, and agreed. Therefore in some ways I was embodying the theme of hospitality by being a host to these unexpected guests.

They were delighted to be in the city and we quickly worked out a route. I would show them round the city centre venues until lunch time and then I would point them in the direction of the water-front venues. We walked to the lift and then onto the VIP door called ‘But I’m on the guest list too!’ As a performance artist Charlotte was really interested in these pieces.  I explained I enjoyed discussing the door with the college and school parties. Showing how its position related to the Hilton and Liverpool’s most exclusive night club, how we would talk about who could and couldn’t go in. I also related the story of another volunteer who brought his grandchildren to the door, they couldn’t go through but their glasses and bags could so afterwards they proudly walked around with their ‘VIP’ items. 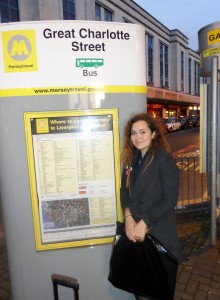 They loved walking through Liverpool One, spotting the Harvey Nicholls stores and Liverpool’s eating places. Our next point of call was the Ming Wong exhibition on Wood Street. We were welcomed by Ben and Howie, 2 young volunteers who were delighted to hear the story. Maisie, Charlotte’s friend, really enjoyed the ‘Making Chinatown’ piece as she is studying theatrical make up. She was interested to see Mong Wong made up as the Faye Dunaway character and also see the scene where the nose was cut. They were visibly shocked in the ‘After Chinatown’ room where they saw the ‘Chop Suey’ disguise glasses with their fake Chinese eyes. They also noticed the further irony that the glasses were made in Hong Kong. Before leaving we looked at the film poster collection and it was here I had my photograph taken with them.

A short walk brought us to the Tea Factory and Sabelo Mlangeni’s photographs exploring life in Johannesburg. I was able to give them some insights into the collections as the Art Club had discussed his work on Sunday and Dave Evans who had lived through the apartheid regime had given some fascinating insights into South Africa pre- and post-apartheid.  They were interested as their generation no longer has South Africa in the media spotlight.  Charlotte remarked she had always assumed that all white people in South Africa were rich when the photographs showed a different story.

Chatting away,  we headed up to FACT. I have a daughter who is the same age as them and is now living away from home so I found I could relate to them easily. It was delightful hearing their enthusiastic comments and insights. Once inside they quickly started having fun with the games devised by Pedro Reyes and once again this appealed to Charlotte’s performance art practice. The curator was told the story of her prize and kindly allowed them to take a copy of all of the posters instead of one each.

We next went into see Akram Zaatari’s photographs, which were inspiring to Charlotte especially the ones where adults were recreating poses of children doing childlike things like lying naked or lifting up their skirts. We walked past  Jemima Wyman’s wall hangings made out of camouflage materials and made our way to the ‘Ultimate Substance’. Coming out of that screening we met two young students who recognised me as I had given their college a tour. They had questionnaires for us to fill in which Charlotte was delighted to do as it helped her to start reflecting on her experiences. As we were walking down the stairs we were joking,  saying the day was magical. This was amazing as a few minutes later someone I knew from my librarian days walked out of the café. He recognised me and said hello. I introduced him to Charlotte and Massie. He was Gideon Ben Tovim the chair of Liverpool Primary Care Trust. http://www.liverpoolpct.nhs.uk/Your_PCT/about_us/board/gideon_bentovim.aspx

He was delighted to hear Charlotte’s story, he let her know his daughter was also a performance artist,  gave her his decade of well-being badge from his jacket and a ‘5 ways to well-being’ pen. This was apt as we were following all of the 5 ways on our tour – connecting; being active; taking notice; learning and giving to others.

Next stop – the Monro. We had fun discussing Janine Antoni’s ‘Umbilical’ where she had placed a silver cast of the inside of her own mouth and silver cast of the inside of her mum’s hand on either end of a silver spoon. Dane Mitchell work was also intriguing, the ghost stories invisibly captured inside glass vessels and his wallpaper. The highlight was going into Markus Kahre’s installation and being amazed by the mirrors where you could not see your own reflection.

We stopped in the Brink, on Parr Street, for a well-earned cold refreshing drink. Here the conversation continued to flow and Charlotte gave me some interesting thoughts on setting up a blog. She also talked about her performance practice and the outline of the proposed art performance that awarded her this trip to the Biennial. Her idea was she would offer people in a public space 3 types of hospitality – a chance to have a cup of tea with her and a chat; an extended hug where she whispers sweet nothings in your ear or a power nap with a bedtime story.

Refreshed we headed back to the Bluecoat to watch the ‘The Unfinished Conversation’ and look at Sun Xun’s ‘Ancient Film’. Charlotte was really moved by John Akomfrah’s film, especially as her mum was mixed race and was born in the 1950’s, where a lot of the film was set. Her mum had spoken a little bit about her experiences but Charlotte had not realised how harsh life may have been for her. She also knew one of the researches who had found the footage in the British Film Archive. When we walked into the upstairs part of ‘Ancient Film’ show the 2 young women both exclaimed ‘wow’.  After taking photographs we headed back to the café. It was decided to end the tour there as a lot had been seen and time was passing.

We left the Bluecoat via the Art Shop where Charlotte bought a couple of prints as a souvenir of her visit. We headed back to Lime Street station via Great Charlotte Street where the performance artist had her photo taken by the bus stop sign. Finally we said our good-byes and parted ways.

This was a delightful tour for me, seeing what has now become familiar art but with the insights of two young women, one of whom has recently graduated from University. I’ve given her the contact details of the director of the Bluecoat so I’m hoping he will say yes to her performance art piece taking place there. It will be great to meet up with her again with her youthful vigour and enthusiasm which will help her become a welcome guest once again in our cultural city.

To find out more about Charlotte Emily follow these links –