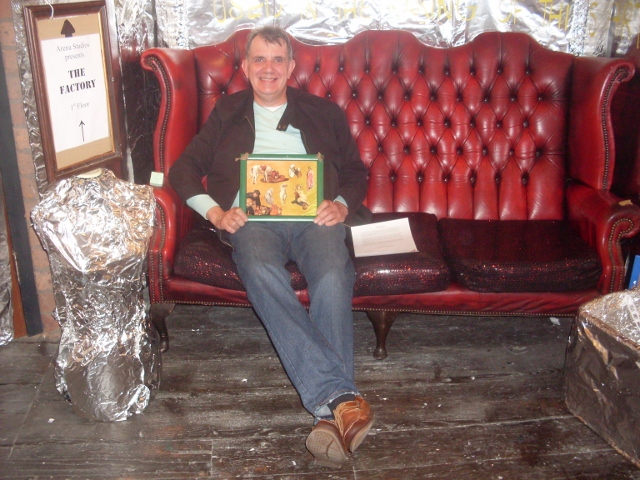 I had an enjoyable evening enjoying the cultural delights of Light Night.

I had worked a rough plan for the evening which varied as the night went on.

I enjoyed the build up as there was a lot of interest on Face Book with different arts organisations
and websites discussing what they were doing. I posted on the Light Night Face Book page and was
given a couple of suggestions to follow up. 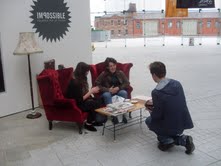 I picked my friend up and we made our way to our first port of call – the Open Eye Gallery. There we were met with their customary friendliness. After a quick look around the gallery we queued up for our photo taken on a polaroid camera. Here we posed with tea cups (borrowed from the Leaf café). The resulting image I’ve got to say was disappointing as it did not develop very well. I showed it to
a friend later in the Arena Studios and she felt it would of benefitted if a flash had been used. I was glad I was in the first 50 who got their photo free and didn’t pay £3. Although it was still a fun thing to do.

Then a drive over town to visit the Walker Art Gallery and see Rolf Harris’s show. Again a friendly
gallery assistant explained where we needed to go and let us know we were in time to see Rolf paint
a picture, although the room he was doing it was full we were able to watch on a screen. He was
able to take his time and not do it in the 2 minute time slot he had in the 60’s. I found myself smiling
away as I watched him paint in his inimitable style while bantering with the onlookers. It was lovely
being with a crowd as he created an instant piece of art. We enjoyed the pictures we were able to
see and decided it will be good to come back to see the show at a more leisurely pace.

Having taken longer than planned we reluctantly decided not to go to Wongs for the pop up photo
exhibition but headed over to Bold St to look at the market stall and get something to eat. There
was a stall selling delicious salads and quiches I shop from when I go to the Wirral Farmers market
but as it had started to rain we had a meal in an Italian restaurant instead. Where to go next? Our
options were the Black E for the Chinese Arts Showcase or the Victoria Gallery and Museum at the
University. We let our friendly waitress decide. She chose the Victoria Gallery and Museum for us
because of its architecture – we were pleased with her choice.

I’ve been past the building probably over a thousand times and never been in. The building 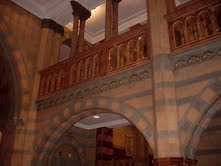 was
astonishing with it glazed brick interior. Once again a friendly guide explained what was on offer. We had been interested in the taxidermy demonstration involving a starling but that was nearly over and she explained that a colleague had popped in just as the artist was popping out one of the birds eyes – which definitely confirmed it was not for us. We went up to the second floor and looked around the small museum which was housed in an amazing room with a glorious roof. We had fun in the archaeology section standing in a mock up tent and trying on some of the archaeologist’s clothes. On the way out we noticed the café which serves delicious food and well thought out worksheets for families to use to help spot items in the building. This is another place I will return to
and enjoy.

Then over to the Catholic Cathedral. We looked across at the Active Learning Laboratory building
which had its coloured lights switched on in a rainbow style to mark the International Day Against
Homophobia. We went across the back of the cathedral past the light installation which as it wasnot completely dark was not showing to its full effect. Then down to the piazza to take part in the candlelit labyrinth walk. As it was raining people were going round in a more determined fashion than normal. However I let some people go past me so I was able to take my time reflecting on my past and thinking of my dad and other influences in my life. Once in the centre I made and wish and then found the p 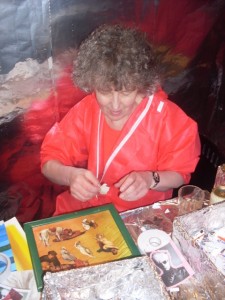 ath led straight out. We did this walk last year when it was on the John Moores Campus on Brownlow Hill. We preferred its grassy location and the fact it wasn’t raining.

I said goodbye to my friend and headed down to the Arena Studios on Parliament St. This was set up like Andy Warhol’s Factory and I had some fun making a picture with the assistance of the art assistants.

I had an interesting walk back to the car. Leaving the Arena studios I walked up Jamaica Street past guys dressed up as zombies trying to stop people getting to Camp and Furnace. I made a detour to go past the light installation showing on the side of St John’s Shopping Precinct. There I noticed a couple with a yellow Light Night brochure in their hands and stopped to have a chat. To be honest
we were nonplussed by the installation as the kaleidoscopic light show was nothing unusual and we noticed most people walked past unaware it was there. However it was a great way to finish the evening having the opportunity to talk to total strangers and share our experiences of Light Night and Liverpool cultural life in general.

Overall I had an enjoyable evening in my city, enjoying the company of my friend, meeting people and will definitely return to see the Rolf Harris show, make more visits to the Victoria Gallery and
Museum and continue to seek out the various galleries and other cultural places Liverpool has on
offer.

Review: Beyond Dredd & Watchmen: the Art of John Higgins