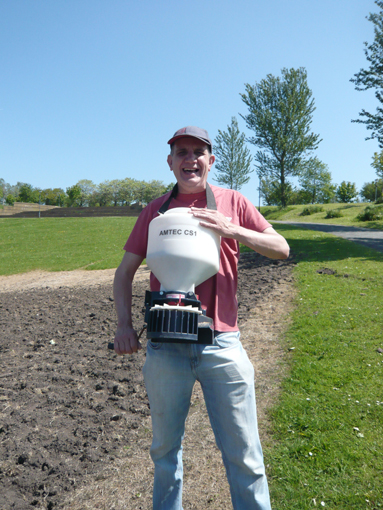 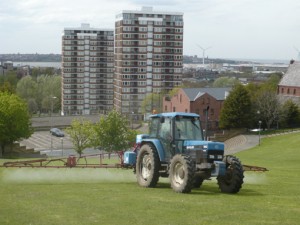 I’ve recently become a facebook friend of the Liverpool Biennial as I enjoyed attending it last year and now I’ve taken a retirement/redundancy deal fancy being a volunteer. I was able to see the press announcements about what is being planned this year. I was interested to see that like the Giant Sea Odyssey a focus was going to be on the North of the city and Everton in particular. An announcement was made that they were looking for volunteers this weekend for 3 Everton Park projects. I decided I would like to help with the creation of 2 acre sized patches of wild flowers that would highlight the importance of bees in an urban environment.

I set out in the car in the bright sunshine not too sure what to expect. I have been to Everton Park a few times as I worked as a community librarian in the area when the concept was first being devised and most recently was there when the giant little girl and her dog, Xolo, rested when they roamed the area during the Giant Sea Odyssey weekend. However it is an area that I like a lot of other Scousers tend to overlook. 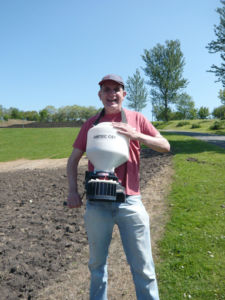 I parked the car behind St George’s church and set off to find the area. I walked towards Liverpool and into the park. I saw below me 2 enormous patches of bare soil amongst all the green grass and 2 small figures scattering seeds. They were Rebecca Chesney, the artist and Richard Scott, from the wild flower centre, both immediately made me feel welcome .

I realised a tremendous spot had been chosen as it looked out across the river and towards the Welsh Hills with the city of Liverpool with its tall hotels stretching across to the left. There are going to be a number of amazing vantage spots once the flowers start to bloom including 2 tall tower blocks of flats that are nearby and the Mersey Ferry as it does it circular tourist route on the river.

It was explained one patch is being sown with blue wild flowers and the other yellow. Species had been chosen that will be in bloom in September when the biennial starts and others will continue for years to come. Some residents came by including one with bottles of water as a thank-you from the local residents association and a couple of women who lived in the nearby flats. They were delighted with the project as though the park has a lot of greenery, there are not any flowers for
people to enjoy. 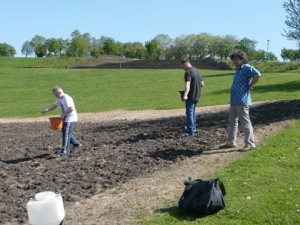 I found myself really enjoying scattering the seeds, sometimes out of a bucket and others out of a scattering machine. It made me think this is something people would of done for thousands of years putting seeds into bare earth with the hope of a wonderful harvest to come. I felt a weird sense of connection with my ancestral past. I Also thought of my mum, whose influence in my life I have been reassessing lately. She was brought up in a small village near Cambridge and came to Liverpool to be a nurse during the war. She used to take us back to her village every Easter for a holiday and I realised without that it would be highly unlikely I would be here this morning having fun.

Rebecca and Richard were both very open and friendly. We had a good laugh while scattering the seeds and enjoyed a lot of banter. We talked a little bit about Rolf Harris and the magic of seeing a picture created before your eyes. Rebecca shared how she had become fascinated with art. as she had watched, as a child, her dad drawing and loved the magic of him creating a picture from the end of his pencil. I looked at her website and found that not only does she create these art works with nature but also has a series of intricate drawings. http://www.rebeccachesney.com/index.html

I find I’m really looking forward to the magic of this piece of art unfolding both in time for the biennial and for years to come. Talking to a friend on my mobile I realised I could create a similar mini planting in my back garden, in a raised bed that needs some attention. They kindly let me have some seed and I’ve agreed I will keep Rebecca informed of how it progresses. So I will have a mini Rebecca Chesney artwork in my own back garden!!

I went home via the dig that was taking place further up the park and spent some time talking to people from the biennial team and a group of local people who used to live in the houses that were demolished. It was amazing to hear the stories of the various characters and how the area was divided amongst strict catholic/protestant lines and what people did to survive this. As I was leaving I mentioned I had helped sow seeds at the 2 patches of soil over the hill and someone remarked they looked like the open pages of a book. This resonated with me as I had worked as librarian for38 years before the local government cuts for Liverpool came which meant it made sense for me to leave work.

In Conversation with Mike McCartney