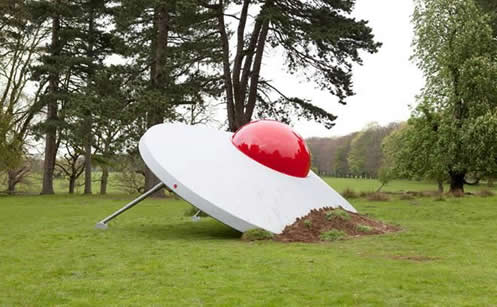 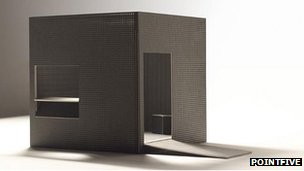 The urge to fly is something deeply routed in the human psyche; the impossible feat that infuriates and perplexes our imaginations as well as stirs creativity in all areas of life whether it be science, design or art. The third Biennial, held in the beautiful surroundings of Tatton Park, takes this idea as its starting point to deliver twenty innovative and evocative new commissions built around man’s desire for flight.
Starting from the Biennial Kiosk, designed by Liverpool based design mavericks Pointfive, the exhibition drips with clean-cut quality and quirky delight. The kiosk itself is said to look like a black box flight recorder, holding all the information on the festival as well as an unwitting volunteer. The contrast between the works and their surroundings is delicious and of high counterpoint from the very start with Pointfive’s kiosk reminiscent of the ever-present monolith from Stanley Kubrick’s 2001: a Space Odyssey. 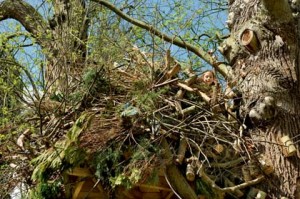 between the beautiful flora and flowing foliage. Hilary Jack’s Empty Nest manages to fit the themes of flight in with actual Tatton Park history, said to exploring the superstition that crows leave when a childless heir to vast riches dies tying in parallels
with the last Lord Egerton of Tatton Park who died alone. The piece itself has a wonderful physicality to it with steps leading up the side of a tree to a crow’s nest inspired tree house full of twigs and natural hoardings. Moving further into the grounds Ultimate Holding Company’s The Cartland Institute for Romance Research sits on the lawn of the garden quietly minding its own business while lapping up every second of its juxtaposition. The piece is a small camper van, filled with Barbara Cartland memorabilia with a glider attached to the roof. It
seems quite a humorous piece, yet also acknowledging Cartland’s huge role in the development of military carry glider. 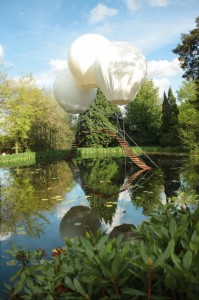 Towards the back of the gardens ponds and lakes dominate the space. The artists
have taken clear advantage of this using the tranquil environment produced by still
water to add an air of mysticism to their own work. On a small island in the middle of
the these lakes is Brass Art’s Trine Messenger; a beautiful, dream like work exploring
the concept of real space and travel through flights of the imagination. Building
a surreal, white head to stand guard over the island seems like a reality created by
Magritte or Miro, yet the surroundings make it seem statuesque and almost natural to
the environment making it one of the more successful pieces of the Biennial.
Olivier Grossetête’s Pont de Singe has similar success aesthetically, with it not
seeming out of place with the Japanese inspired garden adjacent to it. This piece
again reflects the imagination of travel and also of human endeavour with the bridge
across the lake, held up by balloons yet seeming to come from and lead back into
the water. It is the impossible journey for man, the perfect circle we simply cannot
escape from and a rather dark ideal hidden behind the subtle aesthetic conscious
presented in the work. One of the few outdoor installations to play with sound as well as vision, Charbel Ackermann’s Dead Cat dissects the early radio experiments of Lord Egerton, withmsounds appearing from an ominous but giant dead cat microphone cover suspendeamong trees. Again paying tribute to the park’s last owner before the National Trust, it seems like a nice reflection of a lonely man’s hobby, hidden but remembered.

The Biennial has a range of video pieces but the best and most dramatic is Simon Faithfull’s ESY1899: Re-enactment for a Future Scenario. Housed in a batteredcontainer, the sound of the film overwhelms the viewer with nowhere to hide from the blazing fires presented in the video. It looks at the travel rituals of the typical person but made ironic by the scenario where the plane is on fire. Perhaps hinting at our obsession with routine and how it has become more important than self-preservation itself, it’s a dark, miniature Tarkovsky for the commuter generation. Dinu Li’s VEX is the last piece to mention on show. There are other pieces of note not mentioned but some final space simply must be dedicated to this Science Fictionmmasterstroke. VEX consists of a crashed UFO, embedded in the ground but playing a video piece inside it about Che Guevara’s existence in parallel universes. It’s academically interesting but the most enjoyable aspect is the child like ecstasy it brings out in the viewer, harkening back to the days of H.G Wells and Ray Harryhausen. It’s a superb, witty piece of installation art that actually uses its space well, contrasts nicely with its surroundings and is endlessly photogenic.

Overall, this Biennial is a superb third outing for the festival. Stemming from a simple theme, the pieces fit together well, both with each other and Tatton Park. Its scale may be smaller than that of Venice but it’s a show clearly about quality rather
than quantity.

Tatton Park Biennial runs from the 12th of May – 30th of September.