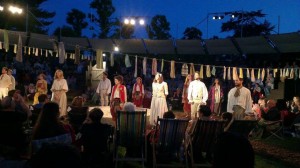 Now this is how theatre is supposed to be.

We are seated under a Roman style canopy, sipping wine and breathing in the scent of summer. Chester boasts “the northern alternative to Shakespeare’s Globe”* – an outdoor, open air theatre in the heart of the historic Cheshire city, erected in the grounds of the beautiful Grosvenor Park.

And could there be a more perfect setting for Shakespeare’s A Midsummer Night’s Dream? Sitting in the park, the audience is transported back to 1596, as the cast fill the space with the lyrical language and billowing costume of the day. Alex Clifton’s adaptation is aesthetically classical, yet contemporary in its staging, with actors engaging the audience on all levels. It is remarkable how Shakespeare is able to remain so relevant to a modern audience: the theatre is packed with viewers of  all ages, every one gleefully soaking up the comedy before them.

The story centres on the wedding of the Duke of Athens to his bride Hippolyta, and the events surrounding this marriage take an unexpected twist, thanks to a group of meddling fairies.

Most of the action concentrates on four young Athenians, who are fighting for their lovers’ hearts. Hermia (Claire Redcliffe) is in love with Lysander (Simon Coombs), but Demetrius (Samuel Collings) loves her too, and disdains Helena (Victoria Gee), who hopelessly pursues him. Helena is the most tragic of the four, as she pathetically throws herself at Demetrius, who only has eyes for her best friend. Gee is a fine comic actress, whose physical exertions on stage prompt huge laughs from the crowd as she chases her wary lover, and her interactions with Collings provide much of the play’s comedy.

The group become mixed up in the fairies’ magical manipulation, as the troublesome Puck (a perfect performance from Danielle and Nichole Bird) mistakes Lysander for Demetrius, and thus confuses the situation further by making Lysander fall in love with Helena, who believes he is mocking her. 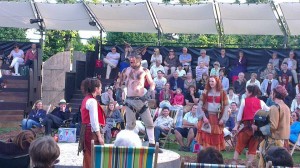 Meanwhile, a group of amateur actors plan a play in honour of the Duke’s wedding. Nick Bottom (a shamelessly hilarious Graham O’Mara) is fantastic as the lead actor, who unwittingly falls foul of the fairies, and has his head transformed into a donkey’s. Bottom then attracts the attention of the fairy queen Titania (Krupa Pattani), who has fallen victim to Lord Oberon’s scheming love potions.

After the interval, the theatre descends into merry chaos, as the 4 young lovers bicker, blunder and battle it out to win over the object of their desire. In a fantastically funny scene, the foursome chase one another around the stage and through the audience, manipulated by Puck to the delight of all watching.

The band of fairies, were amongst my favourite of the cast, with stand out performances from Danielle and and Nichole Bird as Puck, whose pixie-like features and boundless energy made them the perfect selection for the role. The pair move as one on stage, and compliment each other beautifully, each pushing the other to the extremes of mischief.

The one element that made the performance so enjoyable was the amount of interaction and engagement between the actors and the audience. Throughout the play, actors would run, weave and climb through the terraces, or involve the audience by making them or their belongings into props for the play. Theatre in-the-round is perfect for this sort of participation, as the layout makes synergy easy and viewable for all, and every seat in the house delivers a perfect view of events.

From the incredible surroundings, to the perfect performances; the wonderful language to the original direction, Clifton’s re-imagining of one of Shakespeare’s best-known comedies is a triumph, and well worth seeing this summer. Nothing beats a comedy, and this is one of the best Shakespeare adaptations I have seen in a long time.

See http://www.grosvenorparkopenairtheatre.co.uk/ for more info and to book your tickets now.