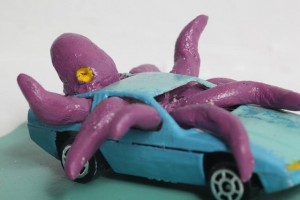 Friday 15 May saw the Liverpool streets inundated until late into the night with culture vultures desperate to secure their latest art fix during Light Night, Open Culture’s annual event.

As part of this event, ROAD Studios opened its doors for the first time in its 2-year history to the general public. ROAD Studios hosts 13 creatives and welcomed those on their late night cultural pilgrimage to take in the vibrancy of this maker’s paradise.

The principal exhibition space encompasses a white wall displaying the words “ Beyond the New World”, showcasing a series of miniature shelves poised upon which are symbols of transportation exploring the theme “On the Road”.  Each artist’s interpretation of automotive travel and what it represents for us as humans is achieved through the recreation and customisation of children’s toys. 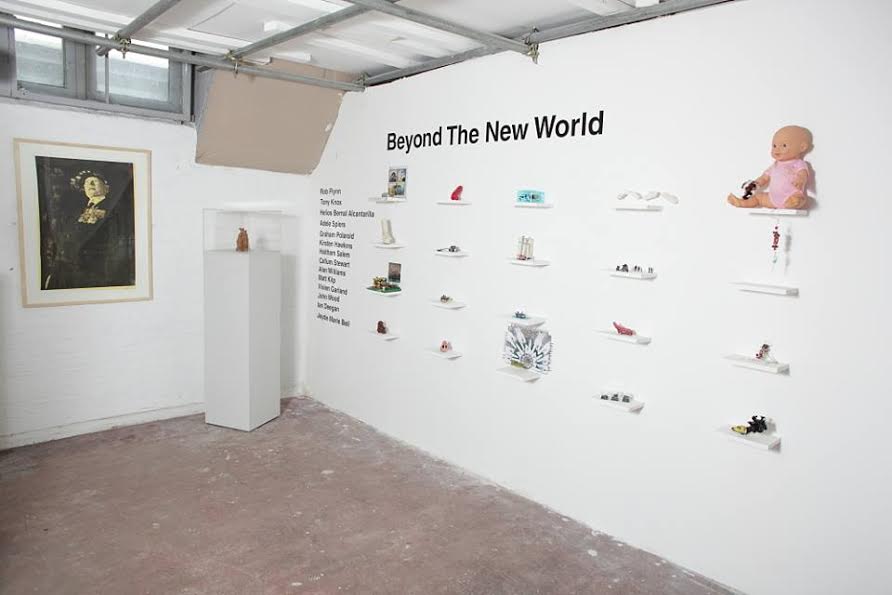 Rob Flynn delivers the playfulness of transport by attributing to them human features, such as a nose and a tongue. He goes on to indulge in a childhood fantasy of a bear manoeuvring a miniature 4×4 suspended on tiger’s legs. Haitham Salem offers up an ode to Damian Hurst’s work dissecting an old-style hatchback and carving up a cow-mobile in a tank. The battle of the sexes is brought to the fore with Callum Stewart’s “penis extension” automobile pitched against the feminised jewellery race cars intended to make masculine motorsports “look pretty”.  One such car earring dangles precariously within reach of Alan Williams’s daredevil doll.  Graham Polaroid’s nostalgic depiction of the recently-retired VW camper is juxtaposed with Tony Knox’s disillusioned hitchhiker hailing a crushed saloon. Helios Bernal Alcantarilla’s Lowryesque scene invites a retrospective outlook on the simplicity of travel while Adele Spier’s hovercraft points us to the future of flying cars. 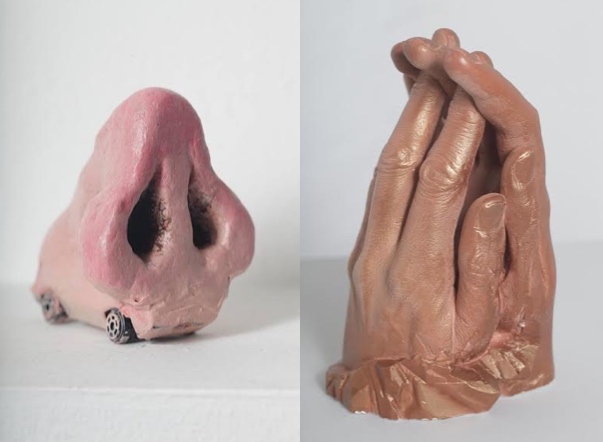 Throughout the attic spaces, workshops are laid out demonstrating the projects of the artists, also revealing their inspirations, work tools and even their home comforts.

Turn left from the wall and you will see work of guest artist Vivien Garland breathing human life into the studio space with two powerful ceramic casts in bronze. A striking female torso stands out alongside the hands of artist mother with daughter succinctly outlining an intimate bond.

Your first steps into the main space will lead you to Graham Polaroid’s desk. Polaroid’s innovative “pola” sketches have given vent to his influences from and passion for Pop Art, depicting celebrities drawn onto disused Polaroid prints.

Next door, self-confessed magpie Mat Kilp takes the detritus of his current surroundings to form a story on canvass that is inimitable, unrepeatable and unique. Kilp acknowledges that to recreate any work, he would have to live his life over again. 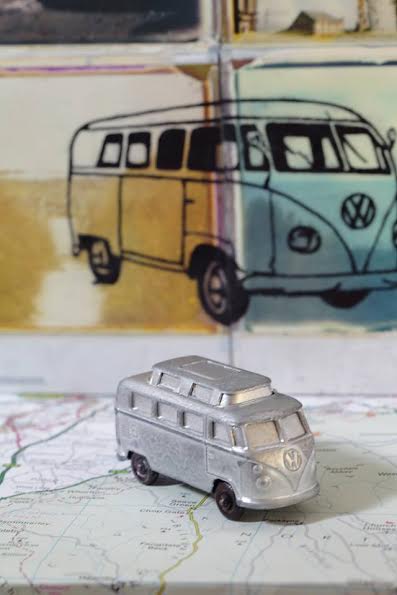 Cross the space into the almost chapel-like alcove that houses Alan William’s tongue-in-cheek photo collages and drawings. With a twinkle in the eye, these framed pieces encourage the viewer to confront the more embarrassing aspects of being human such as having to say sorry or one’s trousers falling down.

A few steps further along, Adele Spiers entices you into a colourful den of mixed media art adopting acrylic, charcoal and oil as her main tools – Spiers’ compositions are other-worldly, reminiscent of Eastern tradition and Greek mythology. She explores other cultural references in her work gleaned from her experiences working with communities as an art psychotherapist.

Separated by a partition, another mixed media artist, Haitham Salem employs collage, stencilling and spray paint to produce a varied cannon of work from a large scale animals to modern film celebrities.

Fine art photographer Rob Flynn makes use of cardboard props to add humour to his photographs. Objects include papier mache boxes and tribal head dresses made from straw.

These large pieces are brought into sharp contrast with the miniature jewellery wares by Kirsten Hawkins produced from sterling silver wire and semi-precious beads. Hawkins aims to demonstrate that wire and beading are just another form of artistic medium, albeit with a practical application, allowing for art to be “wearable.”

You may think you are finished wandering round, but don’t leave just yet – The doorway straight ahead may seem uninviting, but to neglect the sculptors’ workshops would be to cut short the magic.

At first glance, Callum Stewart’s ingenuity may have lured you into a haunted house – Dark lighting and a tall figure that wouldn’t look out of place on a Halloween movie set are part of the myriad of objects for your perusal.  Stewart’s work features found objects such as shop mannequins, hi-vis jackets and lampshades customised to explore Stewart’s quirky concepts. 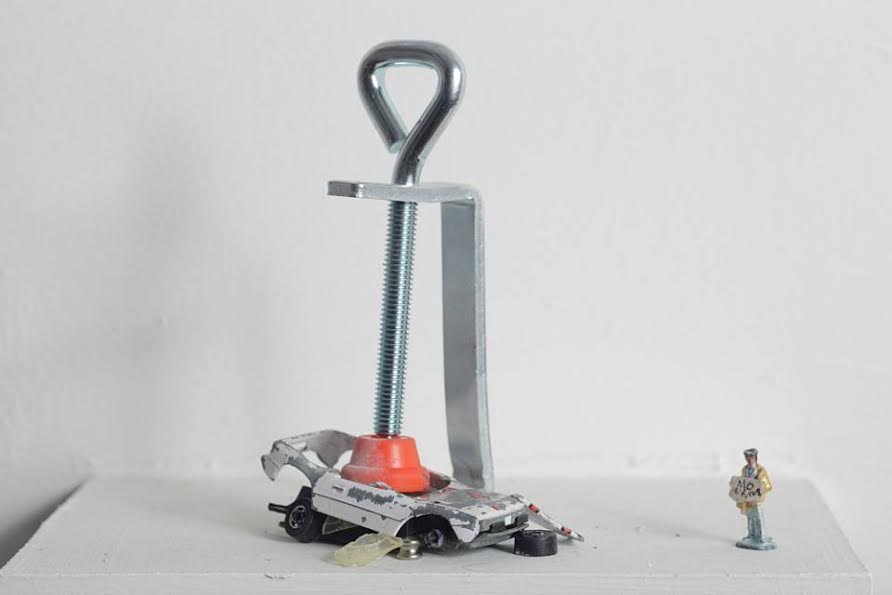 Just a few feet away, the space becomes Dickensian with a modern day Mediterranean twist. Hailing from Zaragoza, Spain, Helios Bernal Alcantarilla has spent time Milan which has informed his work on homelessness in the city. Bernal Alcantarilla is excels in a range of media, from sculpture to charcoal to print work. He describes his work as a commentary on inequality in society rather than a critique or a call-to-action. Bernal Alcantarilla is a teacher of fine art techniques and his main aim is to show others how he achieves his results, declaring he has “no secrets”.  As a testament to this desire to share his skills, he performed a live drawing demonstration on Light Night.  It is worth stating that his sculptured cardboard figures completely stole the show for their originality.

The opening of the space was intended to give the public a sense of the creative endeavours taking place within the city and to share the “inner-workings” of an artist’s studio rather than simply to display the finished results as is what we come to expect of art galleries. ROAD has enabled visitors to get up close and personal with the creative process removing alienation and aloofness and making visitors feel at home.

ROAD Studios is an ensemble of 13 artists. Beyond the New World was an exhibition devised for Light Night 2015 featuring the collaborative and individual work of the artists of ROAD Studios with guest, Vivien Garland.