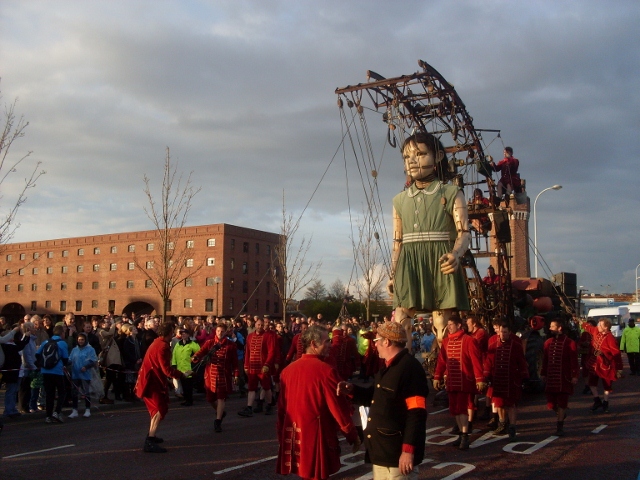 I volunteered to be a benevol steward for the Great Sea Odyssey as I enjoyed the spider spectacle for 2008. I realised that being a Volunteer would take me to the heart of the action. We had a training day in the docks where I met the other volunteers and giants for the first time which confirmed to me this was going to be something special.

Arriving today at Stanley Park an hour before the little girl and her dog, Xolo, woke up an air of expectation was building. School children dressed in period costume and captains of the doomed ship were all inattendance.

Chants of “wake up, wakeup” drifted across the park. 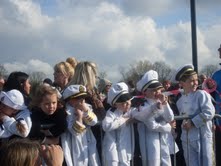 As benevols we were allowed inside the crowd barriers and had close up views of the giants, this continued throughout the day. After watching the girl wake up, have a shower , get dressed and Xolo wake up, have a drink and a groom we were ready to move through the huge crowds assembled to head for the road.

It was amazing walking alongside the giants, seeing people’s faces and briefly chatting to the crowd. People were completely entranced and were on the verge of believing they were seeing a real girl and her dog.

Magic happened. Children who woke up maybe expecting to see the giants found themselves riding on the back of  Xolo through the streets where they lived or having a ride up and down on the arms of the little girl. 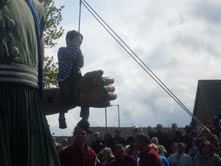 Then we had lunch. Chatted to our new friends and headed back to Everton Brow,( a park a lot of scousers have not been to)  the highest point in Liverpool with amazing views across the river.

We made our way through Everton, Islington, Lime Street, gyratory, Liverpool One and down to the Albert Dock. I was at the back of the procession but was able to see the little girl in her  various modes of transport – boat, foot and car. The drama was increased by the presence of the red costumed puppeteers named Lilliputians. Music was blasted out as made our way down towards the docks. This being a French company many French songs were played, all with a  good beat, so o 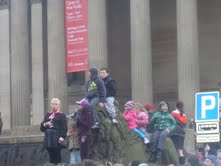 ccasionally spontaneous dancing broke out with my fellow benevols and crowd.

People took advantage of a wide range of vantage points – lions on St George’s plateau, the balcony of the Empire and residents of the apartments near the Albert Dock had the most amazing views.

This was art on the streets in a most incredible way. People thronged to see the giants, total strangers chatting to each other. An air of magic pervaded the city which I sense will increase as the weekend progresses.