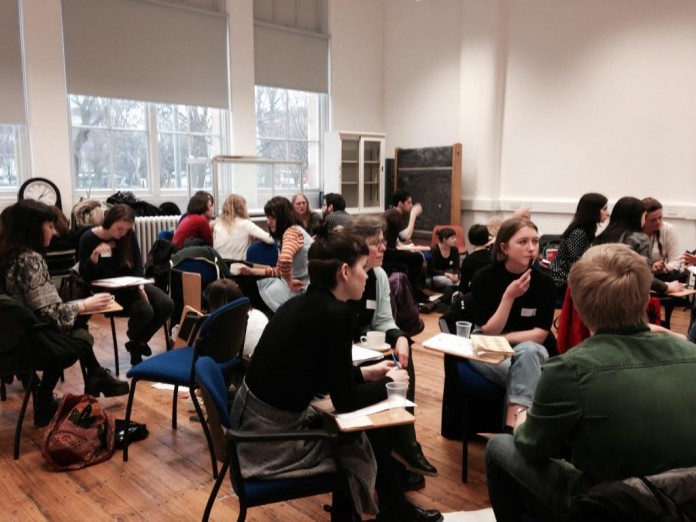 Much has been written about the visual arts over the last few centuries, maybe as a way of defining it, by attempting to analyse, explain and enable access to a world that often remains beyond the grasp of many. Perhaps, it could be argued that those who write about the visual arts become the gatekeepers to it, for they profile and select in a medium that the vast majority of society can understand.

It might also be said that in an attempt to exemplify great art, a regular art writer could unwittingly profile a chosen few, whilst unintentionally dismissing many others. One could therefore argue, that in doing this, writers and art critics have taken control over the socio-political status of art, and that it is their critical analyses and aesthetic dialogues that have gone on to establish what we know of as the art world today.

I know many artists currently working in the North West who don’t actually consider themselves to be a part of this world. The art world – as it would appear to them – is something else, something large and elusive which they have no control or influence over; it goes on elsewhere and is very difficult to access, to exist within or feel a part of. Writing as an artist myself, I can feel their frustration, but can’t buy into the attitude; because, as artists we form society’s understanding of art, and through our creative processes we can help to shape and define the world we live in.

It could be that artists in the North have not yet risen to the heights of a unique and mysterious cultural ‘bar’ that enables access into a seemingly other art world. Alternatively it could it be that those who like writing about art might be few and far between, that their publishing platforms and research resources are limited, and that their ability to find out what is going on is led by what we as artists and arts organisations put out there.

Thankfully over the last couple of years, members of Visual Arts in Liverpool (VAiL) have been striving to redress this imbalance by developing an innovative project aimed at increasing the quality and quantity of critical writing in the North West. Their journey, alongside the producers, editors, journalists, artists and writers that have got involved has been a unique and inspiring story.

The project, supported by the National Lottery through Arts Council England, and initiated by Contemporary Visual Arts Network North West (CVAN NW), almost seamlessly drew together key critical writers and editors from across Liverpool and the wider North West; appearing as if the project had bubbled up under the surface of a real cultural need. People such as Laura Robertson, Co-founder and Editor-in-Chief of The Double Negative, Sinead Nunes, Editor of Art in Liverpool and Susie Stubbs (former Director of Creative Tourist), played a key role in establishing a working group which widened out to include Manchester-based freelance writer and broadcaster Bob Dickinson and Bureau Gallery’s Sophia Crilly, working alongside lecturers from the University of Central Lancashire in Preston, Elaine Speight and Manchester Metropolitan University, Rosemary Shirley.

Elaine and Rosemary had already been trying to develop a joint critical writing programme across their two universities, so this CVAN project could really bring it together. What evolved was an incredibly ambitious project that would involve bursary awards for artists and a cohort of students wanting to develop their practice and experience as critical writers.

The number of applications to the project perhaps underpinned the need that the working group had identified –140 applications for 25 bursary places, yet unlike other creative projects I had been selected for, this one had a feel of winning a golden ticket that would lead to cultural enlightenment; I couldn’t wait to start.

The project offered six full day professional development workshops, each one led by experts in their field, a period of mentoring and also publishing opportunities. I recall that each one seemed to reveal a previously unknown truth; one that particularly sticks in my mind was a workshop held at the Bluecoat. Chris Sharratt, a freelance writer and the current editor of a-n’s news site – with a wealth of experience, happily immersed us in his profound knowledge of journalistic practice, dropping us into a short press-style five minute interview to discover what made him tick.

What shocked me the most – call it a light-bulb moment, or possibly my ‘golden ticket’ – was Sharratt’s love of the written word. He spoke as a writer, who also loves art; he wanted us to consider the story we would tell, the narrative style, its form and function… my mind was racing… so the actual artwork was secondary? Or actually for him, his art was telling a story. I’m not quite sure why I thought that all art writers understood art in the way an artist did, but then I’d also never considered myself as a professional writer.

I attended a group exhibition opening (where I was also exhibiting) and mentioned to a fellow artist that I’d just started a critical writing course:

“Ah” he said “you’re going over to the dark side.” I laughed; “no” I said, “I’m just trying it out – I don’t think a lot of critics really know how artists feel.” And besides, I’ve always thought that if you want to change anything you need to go right to the heart of it and work within it; I didn’t know how much of an adventure this was going to be.

I wondered if I was the only artist interested in exploring this critical gap between the world of writing and the visual world. For nearly thirty years I have been advocating the role of the visual world in people of all ages – inviting them to forget about the written world where things are tied to words, and to enjoy playing with mark making and creative experimentation, so I decided to speak to a kindred spirit, Preston-based artist Rebecca Chesney. Chesney refutes her interest in the use of written language saying that words let her down, which is why she chooses not to write critically; “My language is visual –that’s why I can’t pin it down. For me writing is a translation of the language so it’ll never quite hit it”

When you press her for more information she admits she loves developing narratives in her work “I like to use text to play with people’s perceptions – treating labels as fact –when in fact the words can authenticate the lie”. Chesney’s installation Death by Denim (2015) beautifully demonstrates how she uses text to define a narrative that she wants the viewers of her work to believe. Whilst she is vehement she only works visually, the archive she puts on display in this work, painstakingly crafted, clearly uses words to enable the viewer to fall into her imagined reality. Things are not so black and white as it would seem.

Another artist working in the north who I worked with several years ago, Stephen Raw,  describes himself as a textual artist – his entire visual work is about exploring and redefining how words are presented visually. Its fascinating stuff, but I don’t believe he writes himself, preferring to use his skills to exemplify the work of great writers such as Carol Ann Duffy.

My mentor Laura Robertson believes that writing is a fundamental necessity for all artists, but they don’t need to be critical writers themselves; just know how to contextualise their work across a range of platforms available. Artists probably don’t realise how much they do write, from artist’s statements to social media and websites, so its vitally important that we know what we’re doing across these two languages. She is passionate about the programme and has even got me writing my own blog! Of artists writing, Robertson says “it’s a very useful tool within the context of their own practice. I want to enable a healthy arts scene in the North West, where people are making great art, and its being written about, seen and enjoyed. If people don’t write about art, how can others know it’s going on? “

So maybe it can be as fundamental as that? It’s not about some esoteric culturally elite folk living in central London writing about their friends – it’s about making sure others know what’s going on. And I just love that the inspiration for this project has come from the Liverpool arts scene, a place with such a strong social and political background in making a difference and activating change.

From my own perspective I am fully convinced this project has made a real difference. For a start, a group of professionals have opened up a world that many of the bursary holders originally found perplexing, and we’re now all in touch with each other, regularly receiving emails inviting us to review exhibitions. Nervousness around pitching to editors is a thing of the past, and at least one of the participants has gone on to write for Arts Review. I’m so excited for her, but having experienced how competitive this world is, and how long it takes to write even a short article, having bounced it back and forth from your editor, I wonder what the future holds for critical writing.

I ask Emma Fry, the project manager, what her thoughts are on this and she tells me “ I don’t think people really knew, or even understood, how fragile the world of critical writing is. I get a sense that it’s something that people recognise as important now, particularly in the North West: that you need good communications, advocacy and critical writing to create better conditions for artists”

She is proud – and rightly so of this strand of the project, and I’m guessing that she feels she has scored a well-earned goal in the CVAN net; whose mission is ‘to nurture contemporary visual artists and organisations in order to produce internationally regarded, critically engaged work that is valued by our society’.

She, and the many others who have led and contributed to the programme have done a great job, and for the North West it looks like #writecriticial is here to stay.