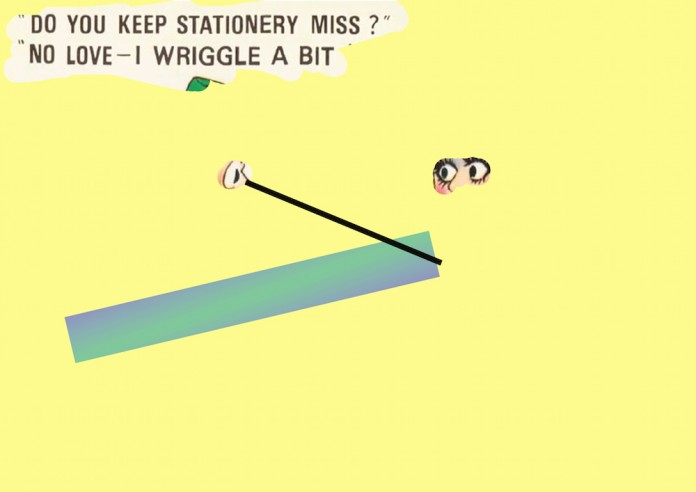 In today’s fast-paced digital society, what role does the humble postcard play? As people increasingly use smartphones and apps such as Facebook and Instagram to capture and circulate their own recreational imagery, have postcards simply faded to the status of nostalgic relics? Or are they social snapshots, images that capture the true essence of place within a consumerist paradigm?

The resonance of the postcard to Britain’s most famous seaside resort isn’t lost on Simeon Barclay. Barclay, a recent MFA Fine Art graduate from Goldsmiths, now based in Leeds, is the first artist to activate the Grundy courtyard in a series of new commissions. Situated outside its main entrance, the courtyard is a rather modest space in comparison with the Grundy’s Edwardian splendor.

Conceptually sharp, Barclay’s practice has previously drawn on a wide range of loaded references, ranging from high modernism to Justin Fashanu, to explore constructions of the self within popular culture and society. Often employing the critically subversive qualities of humour, Barclay’s diverse output is a cerebral melting pot of minimal forms and appropriated imagery.

For the Grundy, Barclay has produced four digital collages, or ‘movements’ – double-sided vinyl works pasted onto existing glass panels. The installation is relatively small but possesses a gaudy colour palette likely to pique the attention of a passer-by. Each image consists of a solid block of colour juxtaposed with strong geometric elements, creating a sparse yet intriguing composition.

By erasing elements of the coloured surface, Barclay teases fragments of recognisable imagery lurking beneath. These images, strongly associated with Blackpool – photographs that could be lifted from an endless supply on Google Images – reveal just enough visual information to prompt the viewer into action. The result is highly subjective compositions that will trigger varying associations, depending whether you’re a day-tripper or a life-long Blackpool resident.

The first image Barclay appropriates is the archetypal Blackpool landmark: the Blackpool Tower. Built in 1894, the Tower was the epicentre of Blackpool’s position as the world’s first working class seaside resort popular with the mill workers of Lancashire and Yorkshire. Instantly recognisable, this black and white image directly recalls Blackpool’s halcyon years. Barclay’s ‘click and drag’ erasure of the powder blue surface appears strikingly similar to the structural mishmash of the ArcelorMittal Orbit: coincidental or a commentary on the commissioning of phallic tourist attractions?

Another enduring image of Blackpool is the ‘saucy’ seaside postcards of the early twentieth century. Appropriating an illustration from Bamforth & Co Ltd, the company who began printing bawdy postcards from 1910, Barclay playfully obscures all detail aside from two pairs of eyes and the double entendres: “Do you keep stationary miss?”, asks the male. “No love – I wriggle a bit”, is the female’s typically smutty response. A thin black line traces an inevitable eye line between retina and heaving cleavage; Barclay mischievously places a rectangle thrusting upwards.

If handed a pencil and given ten minutes, it’s likely most adults could finish these obscured caricatures: the sleazy, aging man and the buxom blonde beauty. Despite being clearly misogynistic, the postcards were a cultural force. Millions were circulated around Britain in the 1930s becoming synonymous with two-week summers by the seaside. On returning to power in 1951 the Tory government cracked down on what they saw as an increase in moral depravity after the war. Smutty postcards were targeted and, along with the natural shift in culture during the 1960s, they slumped out of fashion.

Bolstered by the legacy of the Carry On films, the smutty illustrations didn’t completely disappear. Even as low-cost flights and progressively exotic travel habits eviscerated the British seaside holiday culture, these images have remained remarkably resilient; a television screen burn seared onto our national consciousness. If Martin Parr’s vast postcard collection is a romanticised yet critical perspective on the social decline of the British working class, then the smutty postcard is an emblem of it.

Founded in 1887, Blackpool FC hasn’t experienced much success since ‘The Wizard’ Stanley Matthews graced the pitch in the 1950s. They currently represent a football fan’s worst nightmare; a Premier League dream poisoned from within. During the club’s brief flirtation with the Premier League in 2010-11, fans across the country feverishly noted the date of Blackpool away fixture in their calendars. While most travelling fans saw an ideal opportunity to go on the lash by the seaside, the league’s global profile provided an economic and touristic boost for the town. Now, with contentious ownership and – rightfully – embittered fans, the team is in free-fall down the leagues: the Tangerine Dream gone sour.

As one of the original cast members in a soap once renowned for its gritty Northern realism, Ena Sharples’ stony face, sharp delivery and black hairnet ensured her recognition as a renowned figure. Away from the fictional Weatherfield, Carson resided in Blackpool from the 1920s to her death in 1983. Carson, already a respected actress and performer before joining the cast, reflected in later life that the success of Sharples’ had eclipsed her own identity. Is Barclay suggesting that Blackpool’s rich seaside heritage is a hindrance to establishing its future identity? Or are the featured images romanticised snapshots of a celebrated cultural heritage?

The imagery employed by Barclay is undoubtedly postcard material – key landmarks and images from the ‘hamlet by the sea’. They are images that have been circulated for over 100 years becoming building blocks of Blackpool’s national identity. While the tone of Barclay’s work is genial and warm, there is a contradictory element crackling in his compositions. As the seaside town edges towards major urban regeneration, aimed at its residents and vital visitor economy, Barclay, arguably, raises the critical question: will these new developments enrich Blackpool’s future identity, or subsume it?

Simeon Barclay’s exhibition will be on show until 31 December 2015 at The Grundy Art Gallery, Blackpool.

Image credit: Simeon Barclay ‘A Jolly Lament in Four Movements Concerning A Hamlet By The Sea’ (2015)