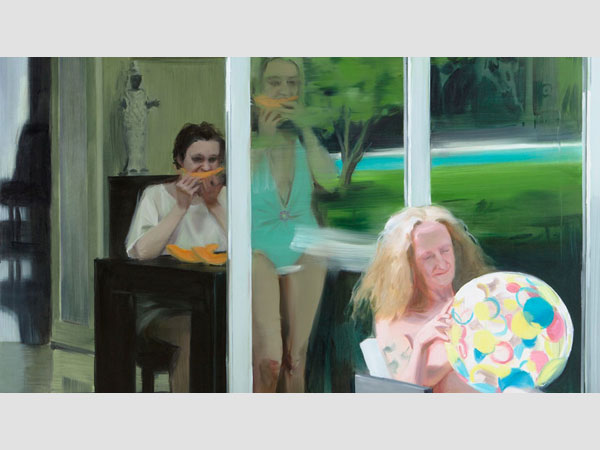 Reality: – the status of things as they actually exist, as opposed to an idealistic or notional idea of them; having an existence.

Fantasy: – the activity of imagining impossible or improbable things; a fanciful mental image a person dwells on; reflects conscious or unconscious wishes.

‘I paint the paintings of all the times and all the thoughts I lack the language to describe. For one single moment that I can recall, I feel a dull sadness for the thousands I have forgotten.’ (George Shaw).

Art is often an abstract response to the ‘real’ world – to real experiences, people, emotions, spaces, and events. Born as a ‘fantasy’ in the mind of artist and curator Chris Stevens, the exhibition comprises of work by hugely influential artists, including Francis Bacon, David Hockney, Alison Watt, as well as that of Chris Stevens himself. REALITY demonstrates a series of extremely varied reactions to ‘real life’, and it is beautifully captivating to observe the originality of both the works and also the diversity of the many aspects of reality each artist chooses to focus on.

With so many new experimental concepts and mediums coming through in the art world over the last few decades, and despite speculations that ‘painting has had its day,’ Chris Stevens’ exhibition comes as a refreshingly individual celebration of British painting over the last 60 years, showcasing the works that have influenced his personal development as a an artist himself. The result is something exceptionally unique.

Previously shown at the Sainsbury Centre for Visual Arts in Norwich, REALITY was recently hosted by the Walker Art Gallery* – a gallery long famed for its support of contemporary painting through the John Moores Painting Prize, first held in 1957; the competition has even been named by Sir Norman Rosenthal as ‘the Oscar of the British painting world.’

‘The painters in this exhibition have been selected under the banner of Realism through their interest in everyday subject matter. Each painter is figurative or representational in nature and yet REALITY will present an extraordinary overview of artists, all with highly individual approaches towards the making of a painting.’ (Chris Stevens).

The close intimacy between the artist, the act of painting and the viewer of the artwork is fascinating in itself. There is no laptop screen or camera lens or computer software for the artwork to be created through, painting is beautifully organic and acts as a physical ‘real world’ extension of thought and feeling: ‘the camera will never compete with the brush and palette until such time as photography can be taken to Heaven or Hell’ (Edvard Munch). Perhaps in the modern day this is a controversial concept, as many people might argue that photography has indeed been ‘taken to Heaven or Hell’ – particularly with the current violence in so many places over the world. But whether news and social media coverage come under the banner of ‘art’ is another matter entirely.

George Shaw’s words are featured on the gallery wall – a pause for thought amongst the surrounding artworks. He connects with memory, and the nature of the human mind to retain the memory of past events – or at least a version of past events, as we reinvent and forget and confuse individual memories with others. Unnervingly of course, we can never know how many memories are now absent to us, or how many we have unknowingly altered over time.

Alongside his words, the exhibiting artists use painting as a shared medium in which to explore memories, ‘moments’ and emotions. The pictures become windows, giving an intimate insight into the mind of the artist: their mental reality is projected into the real world to be taken in by outsiders who might have any number of different responses.

Caroline Walker’s Illuminations (2012) portrays two women who are ‘absorbed in…activity yet are not at work.’ She reminds us that even when we are seemingly left alone, life around us continues to unfold, as well as drawing our attention to the uncomfortable knowledge that we are probably never as alone as we believe we are. As viewers of the work we can see the women through the eyes of a voyeur, observing a glimpse into their most privately intimate moments: we are gazing through two windows at the two women – one of whom is fully nude and the other half clothed. Walker’s standpoint on femininity is illustrated in an almost absurdist way – the nude woman is changing a lightbulb though she is painted ‘like a nymph from a rococo painting,’ complementing the exhibition’s theme of reality and idealism. She can surely be seen by the other woman through the protruding window she stands in: we are not the only voyeur.

In a world overflowing with surveillance, cameras, social media, and so-on, it is near impossible for a person to be utterly alone – and even if they are, ‘reality’ does not come to a halt, no matter how disconnected a person might be from it physically or mentally. Walker entices us into the painting individually as viewers, or playing the voyeur, through a shared awareness that we all experience these same moments when we are alone (or at least when we think we are).

‘I like best to work from council blocks, preferably stained and eroded by the dirt and the weather, where the facial appearance is continually changed by the people who live there, their comings and goings, and changing décor.’ (David Hepher).

Hepher is often described as a landscape painter – urban buildings are not what we might immediately expect from an artist of this description. We might anticipate paintings of the Surrey Hills or English countryside, but instead we are faced with something quite different. Spanning across three canvases and a huge space on the gallery wall, Tree (2010) depicts grey and graffitied urban council flats with trees in the foreground.

Like Walker, Hepher seems intrigued by the private lives of the inhabitants. He makes sure to create individuality in each window – the curtain is drawn here or parted there, plants, candles, and even people’s clothes hanging to dry. We can sense the people so strongly through the artist’s work that we begin wondering about those that live there – who are they, how many live there, where do they work – do they work? But the artist does not include any visible people in the artwork: the invisible but irrefutable human presence is a concept threaded through the exhibition. We might wonder the same questions walking past a seemingly deserted block of flats or row of houses in our very own ‘realities’.

Hepher makes a suitably ‘real’ connection to bring the outside world into the gallery space by using actual construction materials in his work like wallpaper, earth, sandpaper – and in this case concrete and spray paint. He feels that replicating the graffiti on buildings is a way of directly connecting with the people that live on the estate – a way to paint them and their reality without them being physically present.

Outside of painting, artworks like Tracey Emin’s Turner Prize nominated My Bed (1998) have also successfully explored human presence and absence; the installation is incredibly intimate, allowing a viewer directly into Emin’s private space. Although set up almost as though waiting for a performance piece to begin, there is no one there – only us. Like in David Hepher’s Tree, in which we can wonder about the presence of the council block’s inhabitants, here we are met with a sense of the real Emin – the messy bed like a private confession publicly displayed in a gallery space. The human absence along with such a deeply intimate presence is extremely powerful: much more so than if there was a person directly involved in the artwork. It is ironic that ‘visual’ art can be added to so much by something that cannot be seen, but perhaps that is the power.

Back in REALITY, Alison Watt – a former judge of the John Moores Painting Prize (2010) – captures another version of intimacy so vividly that there is no need for a figurative presence on the canvas: she beautifully evokes deeply sensual emotions through painting fabric. Previously to her Fold exhibition in Edinburgh in 1997, she focussed on creating figurative representations of people, but began to develop beyond these and now explores the same subject indirectly through the folds, shadows and highlights of material. In a guest blog for Liverpool Museums, Watt discusses her later works, and describes how though ‘devoid of a human presence, a suggestion of the body is implied in the shadows, tucks and folds represented’ in her O’Keefe-like paintings.

Describing himself as first and foremost an artist rather than a curator, Chris Stevens’ own paintings feature in REALITY. He confronts social stereotypes by painting people that we often do not expect to see in a painted portrait. Directly challenging our own preconceived ideas about portraiture and painting as a whole, he particularly highlights those that often lie subconsciously until they are exposed. The Age of Reason or Salem’s Lot (2011) presents to us a thoroughbred racehorse painted beside a stereotypically depicted ‘lower class’ young man, who also appear together in another work by the artist – The Elephant in the Room (2006). Immediately we are curious as to why these two contrasting characters have been placed together by Stevens: a satchel hangs between the horse and the man, perhaps symbolising war – another theme in the artist’s work. Although not thinking of himself as a history painter, Stevens’ work echoes wars of the past – and unfortunately the violence of the present. War takes people out of their ‘normal’ place: physically, socially and emotionally. The juxtaposing of the man and horse is a modern visual reflection of this concept which has taken place across history.

*REALITY: Modern and Contemporary British Painting was exhibited at the Walker Art Gallery until 29 November 2015.