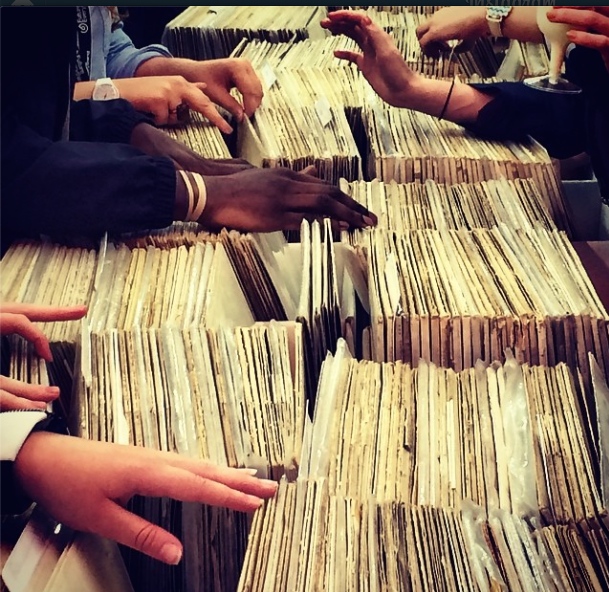 By now, I think half of Liverpool must have been to or at least heard about the infamous pop-up exhibition-cum-record store currently housed in the loading bay space next door to FACT on Wood Street. It’s a fascinating concept with a unique draw for Beatles fans and art obsessives alike: Rutherford Chang, an artist based in New York collects first-pressings of the Beatles’ White Album and since taking his collection on a road trip of America, has ventured overseas for the first time into Europe – his first stop? Liverpool of course.

As I walk into the space for what will be the third time (yes, just slightly in awe of this compulsive collector) I catch Rutherford gluing one of the records in his collection back together, “this isn’t the first time this has happened” he laughs as he puts it down to dry “we just played it though and it still works”. The space is set up like a traditional record shop, with one fundamental difference; there is only one album in stock. The red neon sign at the entrance reflects off the plastic fridge curtains; on one wall are 100 editions of the album displayed in a giant mosaic, with the remainder of the collection in large white boxes, organised numerically through which visitors are invited to rifle. Why, you may ask – well why not?

A version of The White Album plays on the speaker system; the broken record Rutherford was handling is one of the 100 displayed on the side wall – these copies are the first 100 that Rutherford listened to when he originally set up shop in a storefront called Recess in New York. Inviting customers to play a copy of their choice (at this point the artist’s collection spanned just 650 pressings), he recorded the first 100 selected and photographed the covers of each. These recordings were then combined and layered to form what is essentially Rutherford’s version of the original: a psychedelic, unique adaptation of the classic, defined by its imperfections. Each warped note or broken lyric is the product of a scratch or skip on one of those 100 records, meaning this version tells a story about the journey each of those records has been on. In addition to displaying his collection, Rutherford is also selling his ‘new’ White Album, and we are interrupted half way through our conversation by two visitors asking to buy a copy – Rutherford is also willing to trade his record for your originals. 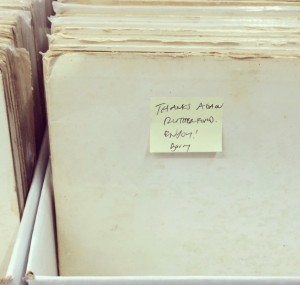 Rutherford’s collection now stands at 1026 and I ask him what the ultimate goal is. “Well, the serial numbers run up to about three million – I’d like them all”. Since he’s been in Liverpool, he’s collected 8 more copies, and met a lot of local people with stories to tell and a personal connection to the record. “People come into the store and bring their copies just to show me”. His intonation suggests this teasing isn’t as much fun for him as it is for the proud owners of those local original pressings and it is clear that this avid collector wants every one. The ambition began when Rutherford was in his teens and acquired his second copy of the album – “it was completely different to the first one I had, it had aged differently”, and from there, this love affair with collecting and categorising over one thousand copies has turned into an eight year project.

More than the music itself, Rutherford’s interest in this particular record seems to be about the plain sleeve, and the possibilities of such a blank canvas. Looking around the shop and pulling out random copies, you can’t help but notice the way in which each copy has been customised, personalised and made entirely unique by each loving owner; some have scrawled their name and address, others have doodled John, Paul, George and Ringo, whilst others have been decayed quite beautifully by coffee stains and sunlight – not one of them is pure white any more. Each has a story to tell, and as the proprietor of this unconventional shop, Rutherford is the living incarnation of those stories. Interacting with his visitors, potential customers and traders, Rutherford can tell you where he found almost every copy, although some of the stories he admits, are partly imagined.

This fascination with the simple cover designed by pop-art great Richard Hamilton has become the key ingredient in a giant collage I suggest, and Rutherford agrees he tends to use collage as a tool. Having attended the artist’s talk at FACT earlier in the week, I had the opportunity to learn about some of his other projects, which you can explore here. Throughout his body of work, like Class of 2008 or Alphabetized Newspaper [sic], the artist meticulously uses newsprint as his medium. Be it logging the ‘hedcuts’ of the subjects of every news article in 2008, or carefully cutting out single letters from a newspaper’s front page to rearrange and alphabetise them, Rutherford utilises these media to produce a new piece of work. I find the idea of this process thrilling, and liken it to the layering of the 100 tracks; each is a long drawn out, careful process, preoccupied with pattern and language and how the layering and restructuring of the form can create an entirely new effect. 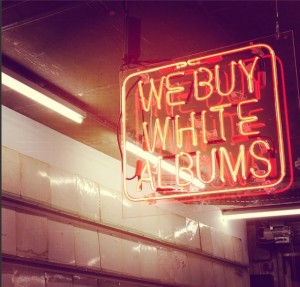 Throughout his previous works, there is an ongoing interest in news, and what Rutherford summarises as “newsworthiness”. I automatically associated this with the the WBWA project, as this too deals with a global success story: The Beatles. Rutherford described the album as a “cultural phenomenon” and explained how ironically, the first run of albums produced came in a ‘limited run’ of three million pressings – a gesture which surely speaks volumes about the impact of the Beatles on the global audience.

Speaking about the creative process, Rutherford commented “I like to use simple forms of organisation to rearrange things, to see something more than what was in the original”. Working with pre-existing cultural materials allows the artist to alter our perception of what we think we know – just try listening to Back in the U.S.S.R. on his version of The White Album and see for yourself. In NBC Nightly News we are forced to reconsider the information we consume so mindlessly everyday. For this twenty minute clip, Rutherford and his pair of assistants spent two weeks editing a public news broadcast by isolating each spoken word and reordering them alphabetically – if this sounds like reading the dictionary, think again. By reordering the words and grouping the repetitions, the audience can quickly pick up on what the most commonly discussed issues are, and the effect this has on our perception of the speaker. The short film fluctuates between coherently telling the viewer the content of the show through broken language, and confusing the listener with the unfinished sentences which begin to form. At times funny, at others fascinating, Rutherford isn’t saying something that isn’t already inherent in the materials he uses; his work simply prompts us to take another look.

Thinking back to WBWA, I ask if this is Rutherford’s favourite album? He laughs, shakes his head “I don’t listen to it as music anymore” which isn’t really much of a surprise considering the amount of work which has gone into compiling this collection and creating the new record. The effect of this ever-growing collage is awesome, and I wonder, what do other people think about the project? “Well my mom thinks I’m crazy”. His interest in collecting, manipulating and displaying The White Album is not simply the past-time of a Beatles fan – its about the physicality of the record itself and our modern preoccupation with ownership. As Rutherford says, there is nothing practical about owning a record collection; rather, it has everything to do with the fetishisation of the object. In an age of MP3 and iTunes, we don’t need a physical collection of albums to listen to music anymore when we can have the digital manifestation tidied away neatly on our phones.

This touring exhibition is a nostalgia-sating, interactive experience and invites the visitor to step into a world where reason has little to do with the pleasure it exudes. So where to next? After a brief trip home, Rutherford will be taking his collection to Tokyo, where apparently many people are “obsessive collectors” – so I think Rutherford is going to fit right in.