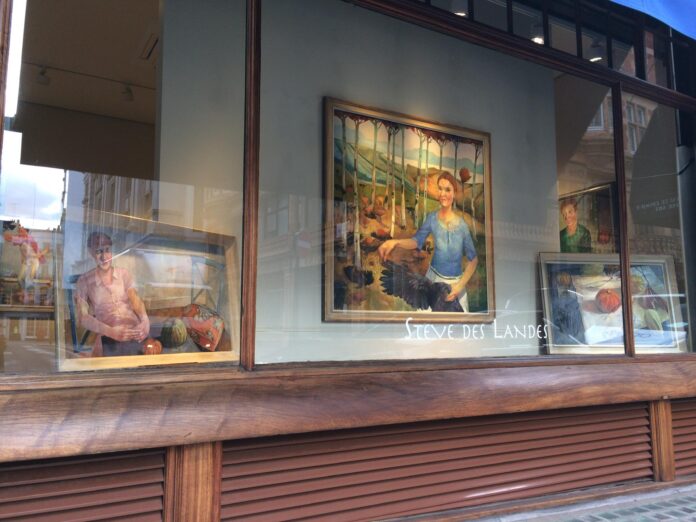 Q and A with Steve Des Landes
Words, Carol Emmas

Steve des Landes went from having a solo exhibition at the Williamson Art Gallery in Birkenhead in 2018 to being represented by one of London’s leading galleries, Messum’s.

His distinctive and striking style is reminiscent of the colourist Slade School of Art/Stanley Spencer figurative tradition. His works often portray hidden psychological narratives through capturing the awkward banality of life, relationships and often unfulfilled ambitions and desires. This current exhibition also coincidently hits on the way we might be feeling now due to many of our hopes of how we perceived 2020 to be, being dashed.

The exhibition finishes at Messum’s St. James’s, London on October 30, then will be shown at The Studio, Marlow.

You can see more via:  https://www.messums.com/exhibitions/viewworks/730/Steve%20des%20Landes.

Carol Emmas: Where did your love of painting stem from and what’s has been your trajectory/path to date?

Steve Des Landes: My love for painting and drawing came from when I was in the infants and early primary school, I can remember being praised for my pictures and told off for my lack of ability to read around about the age of eight all in the same breath. It was the one thing I was good at and it was easy. I spent many hours drawing ships before gravitating to landscapes and people around 11, copying old master drawings badly, from photos at school, started painting in oils at 13. I used to stay back each night in the art room and work from 3.30-5pm from the age of 12. My Grandparents had lots of original paintings on the wall and I just loved looking at them, I never thought about being an artist then, it was just an escape. It was around the age of 12-13 that I seriously considered becoming an artist, but had no idea what it meant.

I went to Southport art college for a two year foundation, followed by a three year degree at Lancaster, and very quickly realised the difficulties of life after college as a practicing artist. But for some reason I just kept going, maybe I believed in myself through a sense of blind faith.

I was invited to share a studio in Liverpool in 1984, at Liverpool artists workshop and the Bridewell studios. Moving into Holmes buildings Liverpool from 88 – 98  was an important step for me, as it was a big space and a proper studio. I felt like a painter, and had lots of small shows where I started selling work, but I was still not hitting my mark. I then started looking into murals and community based work which led to commissions. This helped me distil my thoughts and come back with the start of my present work, beginning in 2009.

Carol Emmas: Your central theme seems to be the disconnect of relationships or the hidden psychology behind them. What is it about this subject matter that attracts you?

Steve Des Landes: I have always been fascinated subconsciously by male /female interaction it was not until I painted loyalty 1, which won a prize at Merseyside contemporary artists 1988 group show, that I began consciously to paint the awkward body language often seen between couples, reflecting disappointment and disillusioned perspectives. I think artists have such a difficult time finding a place to fit in to our society that they often feel at odds with the normal family structure and the sense of security afforded through a conventional job.

Carol Emmas: What have you learned over the past 18-months whilst doing the paintings for Messums and has it changed your approach?

Steve Des Landes: The last 2.5 years since signing with Messum have been difficult but very rewarding, moving from the provincial to a national platform has meant me rethinking and recalibrating my expectations and approach considerably. Working closely with David Messum has enabled me to achieve a more  intense and tender approach to my painting, to look more and draw more but still retain my vision and language without losing my love of paint and my need to express what’s in my head. The realities of a commercial gallery are very sobering, most artists would like to walk in and sell straight off the street, but getting sales without to much of a compromise is very challenging and the market is quite small initially until a painters reputation and profile has grown sufficiently to allow for more expressive works.

Carol Emmas: Are you a compulsive painter driven seemingly by external forces, or are do you paint solely for enjoyment?

Steve Des Landes: I paint because I have to, if days go by and even weeks where I don’t work then I feel that I might be losing the need, it’s not a hunger but a constant voice in my head, ideas are always presenting themselves. It’s always been like this, and I now learn to trust and occasionally relax into periods of inactivity due to life.