on the building, it’s history and its director

FACT opened its doors in 2003, and in the fifteen years since has solidly cemented its reputation as a trailblazer in fields well beyond its name. For its birthday though it’s the spirit of FACT at 15 that is being celebrated, not its history. Experimental interdisciplinary film, performance and installations are set to take over, alongside the most challenging exhibition the gallery has ever shown.

States of Play: Role Play Reality should be seen regardless of what else is going on, but with Smriti Keshari’s The Bomb, screening at FACT at 15 on the 13th, and Graham Dunning performing Mechanical Techno at the gallery and around the city nobody could leave without a clear view of what the Foundation for Art and Creative Technology is today.

Since the building was completed in 2003, as the first purpose built arts building in Liverpool for over 60 years, it has shoved and pushed its agenda to the front of conversations on an international scale, but it’s what FACT does in Liverpool that makes it fit so well today. In 2008, FACT became something of a poster child for Liverpool, as the newly built, outward looking, forward thinker. It put it on my radar, as an 18 year old exploring art beyond the classroom, and must have done the same for others, but it was in 2009 for me, that the gallery found its voice.

In 2009 one of the first exhibitions I truly remember every moment of, was Space Invaders. As its name suggests it was an examination of the history of gaming, and the potential it could have when lines are crossed between the worlds we encounter in our games, and the world we actually inhabit.

In 2009 Virtual Reality was a sort of decent idea, not something you could buy for a tenner on Amazon. Nine years on from Space Invaders the determination of FACT to continue asking the same questions of a world it promised to interrogate is evident, with their latest exhibition starting to understand the answers Space Invaders couldn’t give.

That dedication to interrogating the technology is undoubtedly the result of Mike Stubbs, the gallery’s director since 2008, and part of the scene that paved the way for FACT, with a group called Moviola.

Testament to how important the group was to FACT’s progression is the weight Mike Stubbs still puts on it. I set off for an interview and came back wanting to write a history, so forgive this article in its slightly jumpy style. Sitting down with Mike, in an office filled with parts of former exhibitions, and books complied from ideas that inspired them, we spent the first twenty minutes talking about FACT before FACT existed.

The gallery started as Moviola working out of Bluecoat in 1989 with Eddie Berg working at its only full time staff member. Just five years prior, Berg was a student travelling to Blackpool with the Open University Popular Culture course. He got talking to his then lecturer, Sean Cubitt, who had more interest in filling Berg’s mind with notions of video art. In 1985, Eddie Berg came across a weekend of film in Liverpool organised by Merseyside Moviola, this time led by two Liverpool university students.

Clearly by this point, Sean Cubitt’s coach lecture had fully established itself as a driver, and in 1988, Eddie Berg found himself in control of Moviola. Well he did pretty much the only sensible thing you can do when left with an arts organisation in Liverpool in 1988, and talked his way in to the almost open Tate Liverpool. The result was Video Positive ’89, one of the most influential festivals of video art, ever.

And right there, on the listings for Video Positive ’89, is Mike Stubbs, the man who would lead FACT through 2008, and into the present day. The work commissioned at the time was Desert Island Dread, described by AND Journal of Art as:

“a tacky sordid heap of debris and sand, rotating turntables with records playing stuck in their grooves, three monitors with pictures of factory emissions intercut with icecream being disgorged into a cornet (remember Thatcher’s early career?) and a small child eating this revolting stuff […] The message struck home! It was an intriguing pile of detritus.” (AND no. 20, 1989)

But that desire to show us things we wouldn’t otherwise see is what drives FACT now, and drove Video Positive then, and what will continue being the foundation of an intriguing exhibition programme for years to come under the leadership of a man who was there at the very beginning.

Appropriately, this isn’t their first big birthday. In 2009, FACT celebrated their 20th birthday, celebrating 20 years since that edition of Video Positive and the projects that truly laid the foundations of FACT, before any concrete was poured, or the building was even an idea. That’s what embodies FACT though, the lack of body, the knowledge that even if the building fell down tomorrow the idea would continue, because it is needed, and because it is loved.

I doubt I could even start to guess what the future holds for FACT, probably another exhibition about the state of gameplay and reality in 2028, and likely more space for arts and science to continue crossing paths. But, the closer future looks set to continue on a clear path of making real change happen in the Liverpool City Region, using the knowledge within the gallery to shift the region forward. 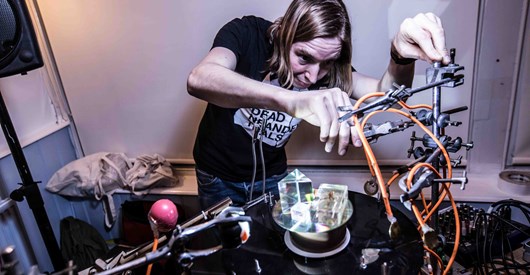 Artist of the Week: Mariadiamantes