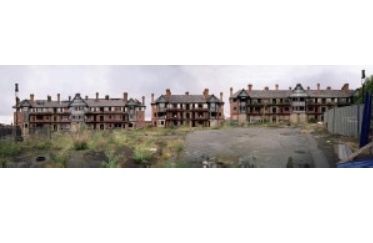 Tabitha Jussa is the third and final nominee for this year’s Liverpool Art Prize to be featured as our Artist of the Week. Art in Liverpool caught up with Tabitha to talk about her fascinating social documentation through photography.

Tell us a bit about yourself as an artist.

In 2010 I completed an MA in documentary photography at Newport. This has formed the backbone to my approach, choosing to consider subject matter with an underlying socio-political slant combined with an interest in the way we live socially as well as physically within (a) space.

I prefer to use traditional analogue photography combined with digital technology. There is something about the quality of film photography that I prefer to digital but I am also interested in exploring new possibilities that a culmination of the two can offer. 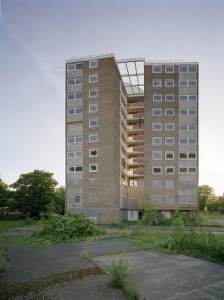 The relationship between people and place is a continuing line of enquiry. Changes in the way we live within cities is of particular interest – change brought on by time, by the decline of industry and the movement of jobs ultimately alters the relationship people have with a place bringing the nostalgia of times past for some and the relief of a new start for others.

How did you get involved with the Liverpool Art Prize this year?
I was very surprised to be nominated!

Could you tell us more about the work you will be presenting as part of the LAP exhibition?

Anfield and Everton became the basis for a lengthy examination of football fan culture and the impact this has on the surrounding areas. This in turn led to an interest in social housing and how people were being displaced both willingly and unwillingly under the banner of ‘Regeneration’.

This brought me to ‘Eldon Grove,’ a social housing tenement block off Vauxhall Road, which I photographed with a medium format camera and painstakingly stitched together digitally to create a large scale photograph that can be viewed microscopically.  This work was selected by the Open Eye gallery and included in an exchange between Shanghai and North West based artists culminating in an exhibition at ShanghArt and the Open Eye gallery.

I have continued to explore social housing at further locations in Liverpool highlighting triumphs, failures and short sightedness within society both physically and metaphysically in the treatment of people and place, acting out local governmental practice and central governmental policies.

Have you see the work of last year’s winner, Tabitha Moses?

Tabitha’s use of fragments of the past from a fascinating range of sources I find very interesting. A passion for what she creates comes through in her work.

Not as prominent as LAP.

I will continue to explore social housing on a national and international level. I have already documented social housing in Shanghai and New York and the summer will be spent travelling and documenting other areas of Britain alongside the images collected from further afield.

The Grayson Perry tapestries at The Walker is a good start to this summers art and the Biennial is always interesting.