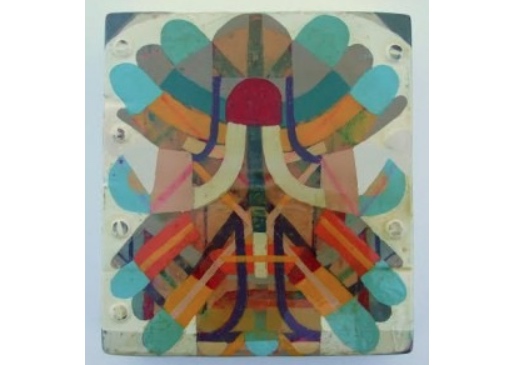 Editor Sinead Nunes talks to Liverpool Art Prize nominee Jason Thompson ahead of the exhibition opening on 9 May. This year the prize returns to Metal at Edge Hill station, with the winner announced at a ceremony on 18 June.

Tell us a bit about yourself as an artist

I like to make things and I make paintings.

I work in a way which I like to think is analogous to (and maybe a continuation of) the evolutionary processes that made us. I do not plan or rehearse anything. I have no idea where the painting is going or how long it is going to take. In fact, I try not to have ideas as such, I like to embrace accidents and contingencies and work with them. There’s a lot of trial and error but there is a general pattern to what I do. They start somehow in improvised marks which tend to get repeated and copied and overlaid. They usually have an enormous amount of layers and take a very long time to make. There is no virtuosity in my painting but I would like it to be accurate. I am, essentially, making the same painting over and over again, its just that they grow differently every time.

I use enamel paints and layers of varnish on wooden panels. The panels are usually found or bought in standard industrial dimensions, ie. I work with what is readily available. Similarly, the paints are never mixed but colours are also considered as ‘found’. The look of the paints and varnishes and the (usually) small size give the work a quality that is somewhere between a sacred icon and an old shed door and is something personal and intimate and hopefully feels familiar.

I think of a painting as having a dual nature; as a made object and as an image which is embodied by that object. How these two aspects relate, and what that might imply interests me.

From being a living conscious thing in a world full of things which will one day be swallowed by the sun that gave it life. It is wonderful.

As my paintings are all about not planning what happens what probably influences me the most are all ‘under the surface’ things that I can only try to work out.

I like the weeds that grow in the cracks of pavements. I like diagrams of botanical, anatomical and mechanical things. I take great comfort from my lack of faith and my loathing of all religions. Music is very important to me too, I like to imagine my paintings are structured like self-generating fugues but I don’t know enough about music to know if I am just making that up.

How did you get involved with the Liverpool Art Prize this year?

Well  someone nominated me for some reason best known to themselves. I’m very grateful they did of course, that was quite a nice thing to have happened.

What do you think about the work of last year’s winner, Tabitha Moses?

I’m no expert on what Tabitha Moses does and I’ve never met her but I have liked what I’ve seen. She seems to be a thoughtful artist with good ideas and hands. And I like all the stuff with hair and sewing.

Not really, I have only ever been in two art competitions before. One was when I won a competition  on “Kick Off” (the old Granada football programme) when I was 10. The other was when I was lucky enough to be in the John Moores Painting Prize 30 years later in 2010. They each had their own merits.

I don’t really do projects, I just make paintings. So all I plan to be doing is making more paintings, hopefully better ones.

Being a painter, it’s always the John Moores competition that I look forward to. I don’t really have much of a clue about what else is going on.

Feature: “Photie-Man” How Tom Wood made a name for himself