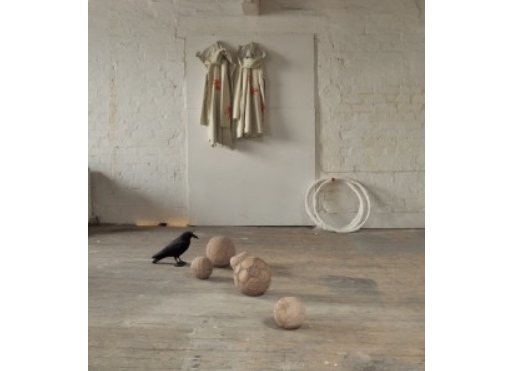 With less than 3 weeks to go until the Liverpol Art Prize is announced, Art in Liverpool caught up with shortlisted artist Brigitte Jurack to find out more about her work.

I think, quite early on in my life, I realised I was drawn to sculpture: watching with the intense curiosity of a child, how the heat of the fire and the hammer of the blacksmith shaped glowing iron rods into intricate floral patters. I was equally fascinated by the seemingly magic transformation of some lump of dough into a beautifully shaped loaf of bread. I like stuff, I like the often-irrational leap of faith with which we bring to life dead matter.

There are different ways to answer this question. It depends on when and where this question is posed. Inspiration – or lets describe this rather quaint and 19th century word in a different way- what gets me started and what keeps me going?  I often start with real anger and annoyance. With the anger of living in a bland monoculture of regurgitated sameness, which I find often, insulting. I start with the urge and desire to hold something against this, something which is not bite size and at once digestible, but something which lingers in the air, which hangs around a bit.

What else? Anything really can trigger the first line on a paper. In this respect it is a kind of love of beautiful moments and things, whereby the waxy skin of an orange lying on black tarmac after the market traders have gone is as significant as the lead grey water of the Mersey or the tensed muscle on an ancient Greek marble statue and the bent over backs of young people perching on top of a wall.

What prompted you to enter the Liverpool Art Prize this year?

To be honest, I was put forward.

What do you think about the work of last year’s winner, Tabitha Moses?

For me, the Liverpool Art Prize exhibitions have become part of the annual calendar of exhibitions I must go and see. Every year I have been absolutely positively surprised by the high quality of the works (of all the artists who have shown).  In fact, the only thing, which surprises me, is that works have not become part of an expanding permanent collection.

Tabitha’s work, like the work of all Liverpool Art Prize shortlisted artists, was of very high quality, and her stitched images touched on hitherto supressed issues.

Yes, many years ago.

Last year I was working on a suite of sculptures for Central Park Wallasey. The sculptures are situated on the site of the former old Liscard Hall, which was an Art school for over 70 years.

Apart from working away in my Birkenhead studio (a great hiding place), I am working with the artists’ collective Foreign Investment on performances and temporary interventions. In January, we were performing in Hong Kong at the Oi! contemporary art centre. Last autumn we were performing in Berlin  and we are making plans to take this performance to Zuerich. Currently I am also exhibiting in London, and exhibitions are planned for Manchester and Berlin for autumn 14 and spring 15 respectively.

That is a difficult question; for me, summers are long uninterrupted days in the studio and warm evenings in southern Europe. But of course I am looking forward to the Biennial and the John Moores Painting Prize, especially since I just found out, that a few of my friends and colleagues have been selected. I always love it, when they all come up to Liverpool for the Biennial.

Liverpool Art Prize goes on display from 9 May 2014

Artist of the Week: LoveArtuk