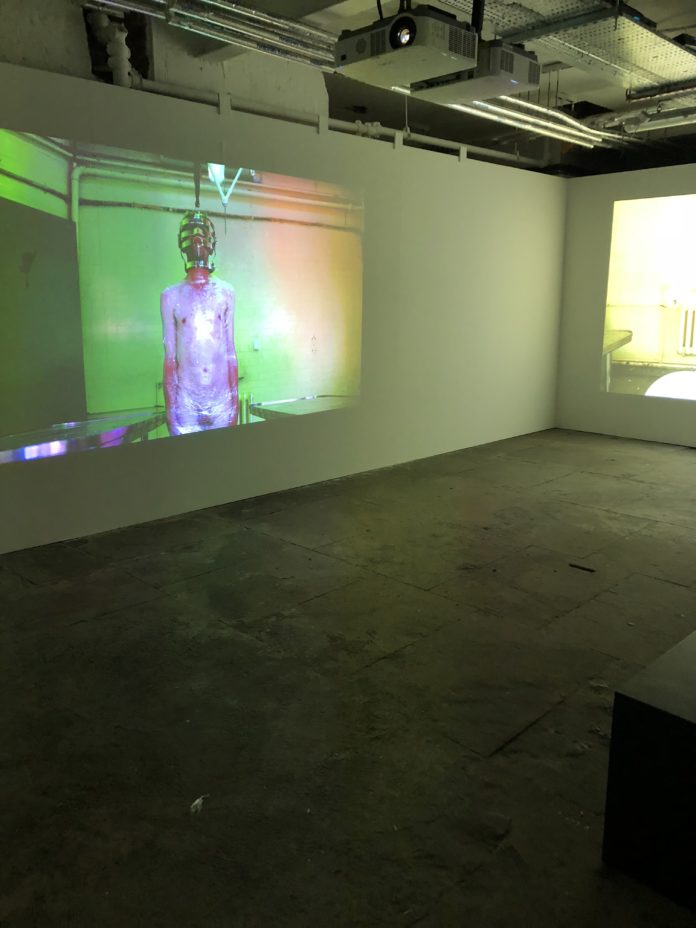 Interview: Martin O’Brien,
on Until the Last Breath is Breathed
and making work about living with cystic fibrosis

Martin O’Brien is a live artist known for long durational solo performances which are concerned with physical endurance, hardship and excess.

His work is informed by his lived experience of cystic fibrosis, a condition which creates a build-up of thick sticky mucus in the lungs, digestive system and other organs which affects the rest of the body and shortens life expectancy.

O’Brien’s practice explores what it means to be born with a life-threatening illness and speaks to the politics of illness and medicine within our contemporary situation.

Joanie Magill spoke to Martin at the launch of his exhibition, Until the Last Breath is Breathed, a video installation premiered as part of DaDaFest International 2018 at St George’s Hall.

JM You are known for your live work. This video installation is based on a performance signalling a significant age for you, can you talk about it?

MO’B Yes, the whole idea is that my life expectancy is 30 – for cystic fibrosis. For 30 hours leading up to my 30th birthday, so midnight as I turned 30, I spent 30 hours doing a performance in an old morgue in South East London. It was me and my friend who’s a film maker and I performed one action on the hour every hour, so the piece is made of 30 different actions.

All the performances were pieces to camera. There was no live audience and the idea was that I would document this moment of turning, what I conceive as, the zombie years, so as I turned into a zombie. That’s what the installation was – a three screen installation documenting those 30 different actions. Many of them are solo, some of them are collaborative.

One of the things I did in the lead up to it was to invite different friends who were artists, people who I’ve collaborated with before, to come for one of the hours and suggest what they might want to do as a collaboration. There’s some stuff where I am on my own and some where I am with one other person, an artist, who has come and done something to me.

You use the term ‘zombie years’. How does this concept influence your practice now?

So this happened a year and a half ago, August 2017, when I turned 30. For me it was an interesting point because I felt it was also the culmination of my work up until then.

All my work had been about living with this disease and moving towards death and this point in the future. Doing this work, some of the stuff I was doing was recreating old works and elements of old works. Some of it was completely new but it felt like this bringing together ten years of work. There was a point of ‘oh, where do I go now? What happens?’

It was a point to reassess and rethink and the idea that emerged was this thing of the zombie years. It was that moment post thinking of the moment of death, of living this weird kind of death or having a different relationship with it where death is no longer this thing in the future that I’m moving towards, but somehow inside me.

So conceptually things changed a little, but also it just sort of spun me around a little bit in thinking ‘what do I do with work, do I just continue as normal?’. I sort of have, I’ve had some old works, but I haven’t made anything new since I’ve filmed it. We’ve been working on the film and the edits since then so I haven’t made any properly-new piece of work since then. So now I’m thinking about the next piece I’ll make next year and what is that gong to be.

You need time to get your head around what it all means?

Yeah, I think so and I think that’s what I’ve been doing from working through this video footage and thinking of it also as part of that process. I do now have this commission which can take place over a five-year period and I’m wondering what that might be. How do I sit in relation to that now? Now that this show has opened, it feels like a weight is off me, actually, because this is the thing that I’ve been carrying around for the last year and I really wanted to show it in the right context, so I was really happy that I could do it here as part of DaDaFest.

Why was it important to be part of DaDaFest?

Well, I first did it two years ago. The last work was a collaboration with a friend, Sheree Rose, and we made work together for that piece which was a 24 hour performance. And I guess there are a couple of reasons. One I worked with fantastic people last time, also I think the politics are really important.

That idea of the disability arts movement is an interesting one, particularly with DaDaFest which will programme more difficult work. I really don’t do much in the disability arts world, not because I don’t want to, but I don’t know if my work is too challenging.

DaDaFest has this mix of different kinds of work and an emphasis on difficult work.

I think with illness and death, it’s hard to talk about it, and it seems to me completely pointless to try and make it clean and pretty. So to actually bring or allow a dirtier or kind of difficult practice of work is really important.

You’ve talked about your work being an act of resistance to your illness. How does it give you agency?

I see performance as the only place where I have total agency. When you have a chronic illness, you are always submitting somehow to medicine to stay alive or to illness itself if something happens. It rips away your ownership of your own body. So performance to me is the place where I can be sick in the way I want to be sick, or I can use medicine in the way I want to use it and I can aesthetisise medicine. I have total control over that space.

So part of the politics for me is that it is a space of agency.

Is there a boundary between the personal and political in your work?

They completely overlap I think. It is like that old feminist slogan, ‘the personal is political’. I think it is relevant to this kind of work too. That idea that if you are sick you are automatically in a political situation. You can’t not be political if you’ve got a chronic illness, because of the kinds of ways in which your time is managed, because of the kind of relationships you’re always situated in. You’re automatically political if you are sick or disabled and this kind of work is kind of embracing that or talking about it.

Marina Abramovic talks about using survival energy in her durational performance. How do you view survival in relation to your work?

I think endurance work is sort of about survival. Endurance, you define it as surviving through something, persisting through something. It’s like an act of survival, so I do see work as that kind of claiming of agency but also as this emphatic statement of presence and survival. I think that it’s both talking about survival through the use of endurance and as a metaphor, but also an act celebrating survival at the same time.

What’s the possibility of this form, and that’s something to work with, so I think my body is present in a different way and it’s thinking about how the body gets used through this form and how to work with it in this form.

—
Until the Last Breath is Breathed runs at St George’s Hall until 8 December.
Interview & image by Joanie Magill