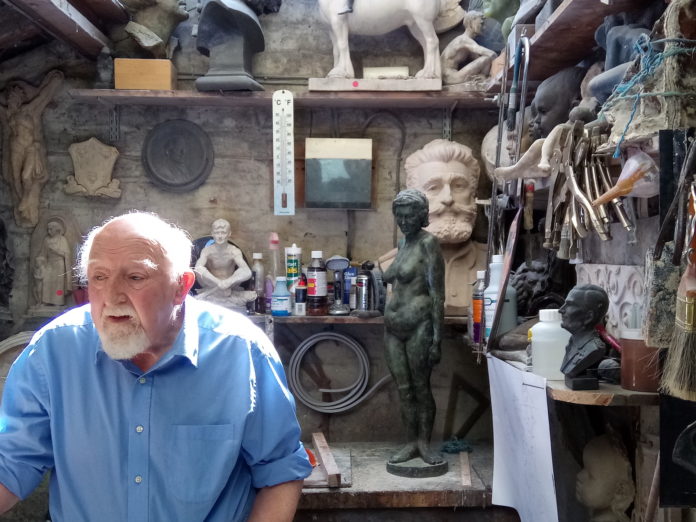 The small back garden shed in Crosby that is sculptor Terry McDonald’s studio is bursting with evidence of his eight decades of creativity.  It’s impossible not to gasp in surprise and delight when he opens the door: heads, portrait busts and maquettes, populate the shelves, among them a bare-back rider on a shire horse, all jostling for position, all with a story to tell.  There is just enough room for two people to be in there at the same time.  It is like a miniature Sir John Soane’s London museum, with the same intense gathering together and curious juxtaposition of objects.  But in this case they are all the work of one man.

To one side of the shed is the female half-size nude Terry is currently working on.  It is wrapped in damp cloths and black plastic to keep the clay from drying out.  Terry, now 89, carefully climbs a couple of steps to reach up and remove the rudimentary garments and demonstrate how he works in the round.  He’s a born teacher, explaining everything as he goes.  He gives me a small lump of clay to feel the precise level of moisture he needs, then rolls and squeezes a fragment of it to the shape he requires before pressing it onto the figure’s right foot.  He works in his studio most days, even though he can now only stand for a couple of hours before his knees start bothering him.

They took the strain during the gruelling process of making the huge clay model of the Mother and Child that heralds the entrance to the Women’s Hospital.  It is his most well-known piece and this year marks 20 years since its inauguration.  It’s touching to think in all that time how many mothers and babes have passed by Terry’s rendition of such a universal pose, that of a mother cradling her new-born child. 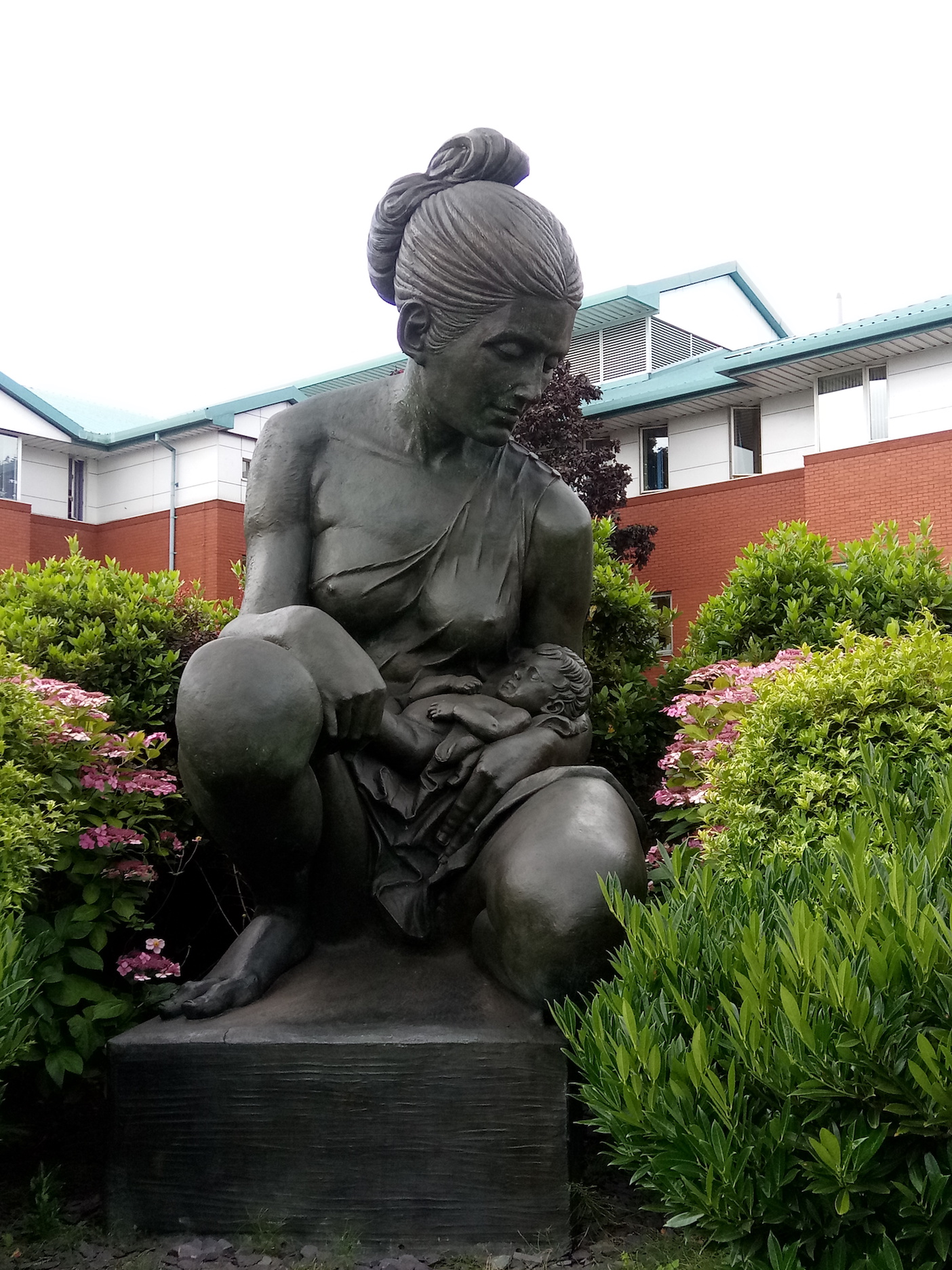 The tenderness of it belies what is needed to bring the 12-foot figure into being – a symbol if ever there was one of the birth process itself! In the sculptor’s case, there is first the construction of an armature that could hold the weight of so much clay, then the layer upon layer of wet clay, requiring Terry to repeatedly climb up a ladder, bearing up to 25lbs of it and then bracing himself against the rungs of the ladder to work on the figure.  And all the while he must also focus on retaining the proportions and form of his sculptural vision.

Something of this scale could not have been made in Terry’s own small studio.  For this he had use of the docklands workshop belonging to David Webster, whose sculptures of John Lennon and The Beatles are known by people from all over the world.  In this huge space, skilled technicians made the mould of Terry’s sculpture so that it could be cast into a more sustainable outdoor material.

“The ideal would have been bronze”, explains Terry, “but that would have cost even back then about £90,000, and there wasn’t a budget for that”.  Instead it is made of fibreglass and resin, which requires maintenance and recently had to be restored.  The restoration work was financed by the Hospital’s Arts for Health Fund* and overseen by Kim Parkman: “We are thrilled that the sculpture is looking its best again. We also took the opportunity to turn the sculpture around so that the Mother and Child is facing outwards, welcoming people to the Hospital”.

It was another Liverpool artist and sculptor, Phil Garrett, who undertook the restoration.  He says he was delighted to do so, crediting Terry with being his mentor: “He was the most important influence for me, more so than any of the formal art training I had, including at the Royal College of Art in London”.  He describes how Terry had a direct connection to the 19th century through having been trained by the renowned sculptor, Herbert Tyson Smith (1883-1972):  “Because of that I felt like I was tapping into the history of traditional sculpting”.  Phil goes on to talk of Terry’s generosity in sharing his knowledge: “Terry has an energy, a passion and a drive for making sculpture and he has always wanted to pass that on.  Such was his influence that if he’d had been a ceramicist that’s what I would have done!”

Terry’s own sculptural apprenticeship began when he was still a teenager at the Bluecoat Studios of Tyson Smith.  For ten years until 1956, Terry gleaned all he could about classical sculpture: “I started by sweeping the floor, running errands and stirring huge vats of clay but I didn’t mind.  Just to be in the atmosphere of a real sculpture studio was what I’d always wanted”.  Prior to being accepted there, Terry had attended evening classes at the Liverpool College of Art and taught himself human anatomy by endless studying of reference books at the Central Library.

Having been thought of as what he describes as a “duffer” at school, Terry had found his place in the world he had first intuited as a child.  One of his brothers gave him a tiny piece of plasticine when he was about four and he recalls how he instantly liked how it felt in his hands, how it became malleable, and how he could make shapes with it:  “It was some time before I realised there was such a thing as a sculptor but once I did, I knew that was for me”.

After leaving Tyson Smith’s studio, Terry worked in Lewis’s Art Department where they used to make all the mannequins and objects for the window displays.  “The first thing they asked me to do was construct the armature and sculpt the face and hands for a 16-foot Father Christmas”, explains Terry, laughing at the memory.

He is Liverpool born and bred, as they say, and evidence of his artistry can be found in various parts of the city, sometimes in unexpected places.  Look up at the façade of what is now Primark, for example, in the city centre and you will see a beautiful example of Terry’s stone carving.  In Liverpool Cathedral he worked on some of the intricate finials of the huge columns after they were damaged in a storm.  Also in the Cathedral, the bust of the WW1 hero, Noel Chavasse, is Terry’s work, as is the Coat of Arms he carved for the Lord Lieutenant of Liverpool, Henry Cotton.  Meanwhile, up the road in the Crypt of the Metropolitan Cathedral, Terry worked on the tomb inscription of Archbishop Richard Downey.

Eighty-five years after he first held that piece of plasticine, Terry has not strayed from the sculptor’s path and his passion for modelling and carving, especially of the human form, is as strong as ever … as are his hands, which deliver a bone-crunching shake on meeting him. 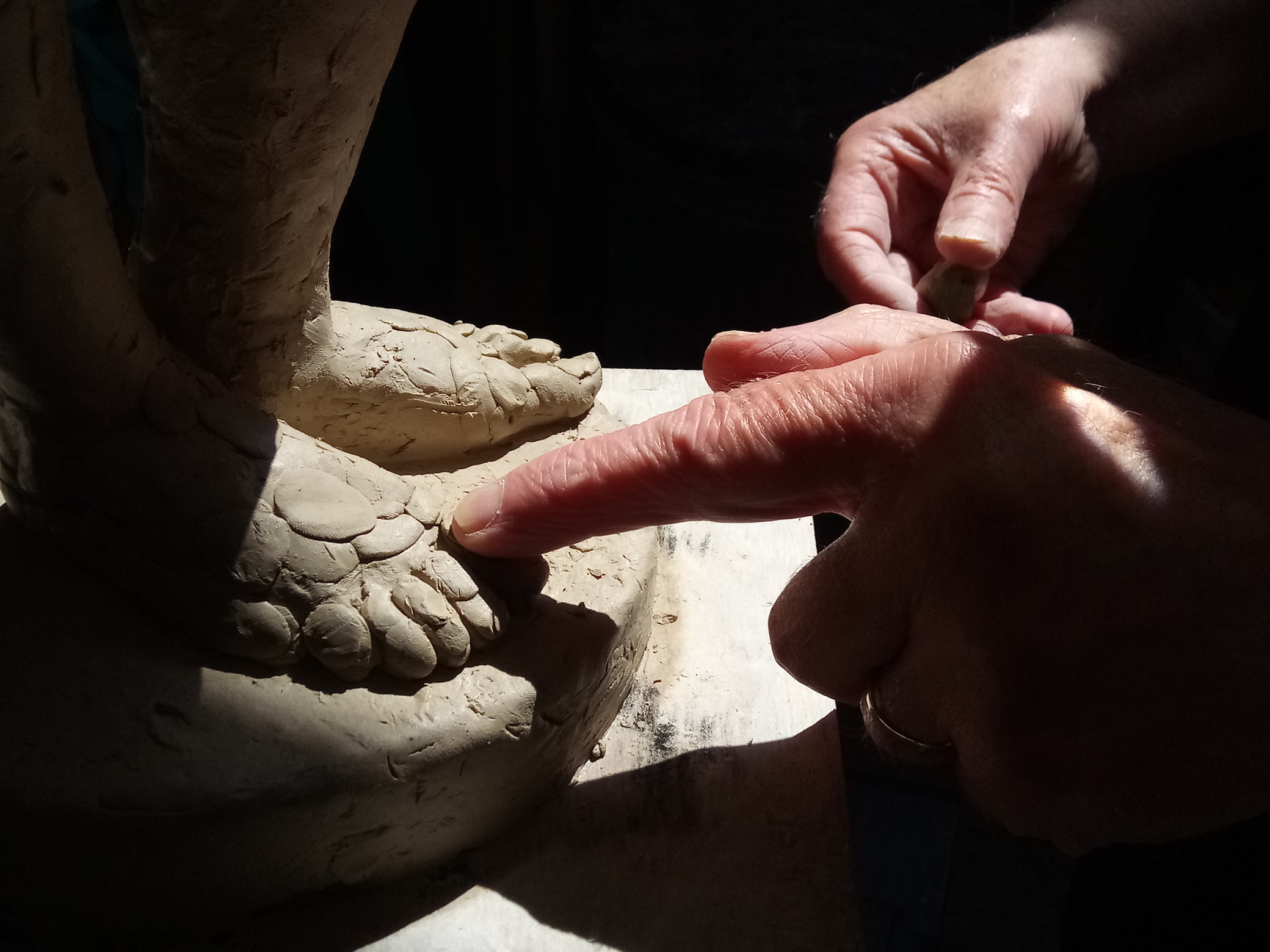 * The public spaces and corridors of the Women’s Hospital contain an outstanding collection of contemporary art, which anyone is welcome to visit.