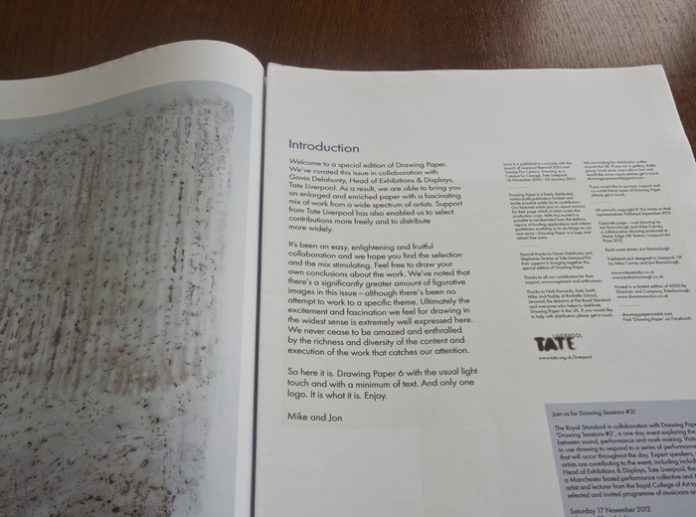 When I was asked to write about the hidden spaces of Liverpool’s art scene I didn’t instantly think, “yep, I’ll write about a newspaper”, but one of Liverpool’s most overlooked galleries is bound by a single staple and distributed sporadically around an ever changing creative landscape.

The Drawing Paper, conceived by Jon Barraclough and Mike Carney in 2010, is an exceptional kind of gallery that displays anything that could be described as drawing, and that can fit on a page. It has been incredibly well received by those who have found it, and it even made an appearance at Tate Liverpool earlier this year. Its success, in simple terms, is down to the fact that anyone who picks it up can roll it and walk around with a gallery in their back pocket. And it provided the only time I’ve ever swung a gallery at a fly, which is a fairly good USP. Unlike rivals of similar mediums, it rarely finds its way to a recycling bin, and tends to find a home on a shelf. I can’t say the same for the Metro.

The main concern of the paper is, as its title suggests, drawing. That opens up channels for popular questions in the arts, but specifically, questions I have heard regularly around the city while writing for ArtinLiverpool.com What do drawings mean? Why do people draw? Why is drawing important? Do we need to learn life drawing at university?

The most influential question, that proves there is a link between the small spaces and the huge ones, is one put forward by Tate’s summer programme “Why do we draw?” Unfortunately, by the time you read this article that exhibition will most likely have been replaced by the Biennial contributions to Tate Liverpool. Luckily though, if you go for a coffee in most shops in The Baltic Triangle there are copies of Drawing Paper #4 hiding in dark corners. That paper was part of a recent exhibition at Tate Liverpool too. The exhibition, Art Gym, which tied Young Tate to The Tate, had the young artists asking all the questions recent graduates should be asking. The following exhibition series, featuring work by Francis Bacon, Melissa Lassnig and Ella Kruglyanskaya, tried very hard to answer those questions. It failed, but in a good way. It was never going to answer a question so huge, but to try shows an effort on the part of one of Liverpool’s giants. Whether that’s attributable to the Drawing Paper is unlikely, but there is no doubt that they have focussed the questions of Liverpool’s creative family towards wanting to understand ‘why’ they do things, rather than simply ‘how’ they do things.

So far, that focus has been displayed in eight issues, all titled unexcitingly as #1, #2, #3, #4, #5, #6, #7 and #8. A very intentional kind of dull though. As Barraclough and Carney explain inside every issue, it is intentionally “a logo and advert free zone”. It’s that lack of fluff that enables the artist contributors to make the most of their space.

Speaking of artists though, it is worth mentioning that this paper is managed by artists who are dedicated to its aims and ethos. Jon Barraclough and Mike Carney came up with an idea and ran with it. It now seems to define their practice and, in a way, their lives. They have stopped exploring other avenues, and focus almost entirely on drawing – their own, and that of others.

Barraclough and Carney have a lot to boast about beyond the Drawing Paper too though, with Mike Carney being largely responsible for how we view creative spaces in Liverpool. I don’t mean anything ethereal by that at all; it’s far more straightforward than how I usually write. He has designed materials for The Double Negative, Bluecoat and The Royal Standard and branded half of Liverpool, so he knows the significance drawing can have more than most.

Issue #4, the paper that has lived on my publications shelf for the last year waiting for its chance to be written about, features the work of some exceptional artists, who at the time perhaps didn’t quite have that big a name for themselves. One that jumps out, and might well to you here too, is Frances Disley, an artist who as a Biennial associate artist through Cactus, will be featuring heavily in Liverpool Biennial 2016. Cactus Gallery is located in The Royal Standard complex with the Drawing Paper’s very own founders. From a single page spread in a 2011 issue of the Drawing Paper, to Liverpool Biennial 2016, Disley’s practice is almost unrecognisable from then; now working on a much larger scale, and rarely with materials as delicate as the clay and pencil which featured in After the Deluge on page 14 of issue #4. Far from being unknown in 2011, Drawing Paper was a platform for Disley to explore drawing in a new kind of gallery. Her most recent work will be driving around Liverpool on the side of an Arriva bus for the next three years.

In 2012, the year they printed their fourth issue, the project was shortlisted for the Liverpool Art Prize, an award created by ArtinLiverpool.com and now curated by Metal at Edge Hill Station. While the reasons behind their nomination aren’t exactly bullet pointed, it’s a fair assumption that it was an acknowledgement of the significant contribution they were beginning to have on how Liverpool presented its creativity. Whether it was critical or just craft is slightly irrelevant. As I said before, Drawing Paper exists to ask questions and show stuff off. That’s the simple way of putting it at least.

These newspaper galleries are printed in editions of 3-4000 and distributed by request. The regular distributers are Bluecoat, FACT, Tate, The Royal Standard, Cactus and Camp and Furnace, but with such an influx of independent spaces and the rise of the Independent Liverpool app there is a huge surge in shops and galleries that could support these paper exhibitions, so who knows, it might be time to expand and start tripling their print editions. Their most recent edition expressed an interest in widening their circulation nationally.

I don’t have an answer to most of the questions I have asked throughout this article, but if I had to answer one, I’d suggest that the importance of drawing lies in the ability of ‘image’ to coincide with ‘word’. An image might be worth a thousand words, but words tend to be more legible, so it’s a necessary exercise to try and switch their context around once in a while. Stick some words on a wall and some images on a page. In its most absolute state, that is what Drawing Paper does. And in doing so they give anyone who wants it a chance to experience drawing in a different light.