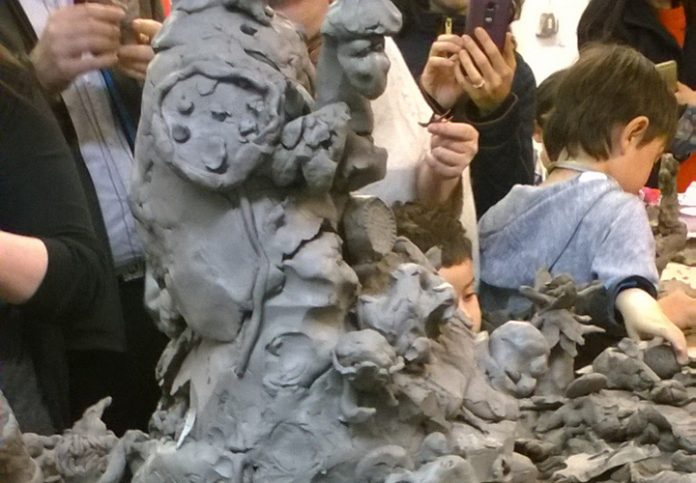 A Messy Space for Ceramic Artists

Chris Turrell-Watts had been working at Southport College as a ceramics technician for about 9 years when the college decided to close the ceramics department. That was about 4 and a half years ago. Chris remembers being part of a fantastic department that also facilitated part of the first year BA Fine Art course at John Moores, so catered for degree and adult education students and was a very well used resource. Unfortunately there are similar stories across the country; when the money men come round and see the amount of space the studio and equipment is taking up and then they work out how many more students and computers they could fit into that space, it apparently becomes a no brainer. However, at least this time a good thing came out of a bad situation. Before the refurbishment of the art and design department started, the college decided to sell the ceramics equipment off; it was a once in a lifetime opportunity to buy it at virtually nothing, so Chris and his colleague Don Parkinson decided to take the plunge and set up the Southport Ceramic Studio.

Chris had lived in Liverpool for 11 years and felt there might be a real interest in ceramics closer to home, so after serving the people of Southport with ceramic inspiration he began a new quest to start a studio in Liverpool’s Baltic Triangle. The story of Baltic Clay began with a crowd funding campaign that raised funds way above its target and worked wonders to spread the word before they had even moved into the space. Ahead of their opening in November 2015 they were full up, both with members and bookings for evening classes.

The Baltic Clay is a messy space for ceramic artists. Rather than the traditional set up of individual studios, there is one big shared space, 2 kilns, two wheels and 12 experienced members who come and go as they please. The studio holds three evening classes a week, taught by Chris, and there are all sorts of ideas for the future, including workshops, expansion and collective work by members. If Baltic Clay’s Light Night performance is anything to go by, Liverpool has great things coming its way. The studios put on a participatory activity with a gigantic ceramic city built by anyone who wanted to have a go and of course they all did! Who doesn’t love messing around with clay?