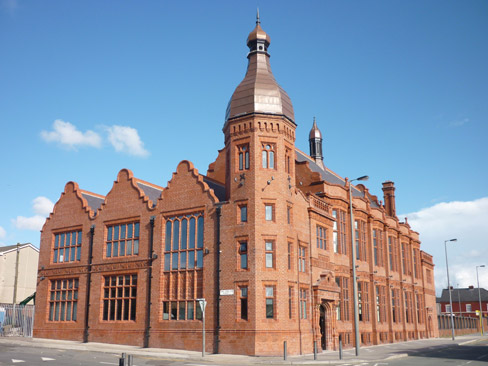 The Florrie Gets Art Curator

Liverpool’s much loved community heritage venue has been popular with creative types since its regeneration and reopening in 2012, but with the creation of a new Art Curator post within the organisation, The Florrie is now strengthening Liverpool’s art scene with a new exhibition programme launching in July. Tom Calderbank was appointed earlier this year with the brief of establishing The Florrie as a credible art venue in the city, something he believes must involve reaching a number of audiences.

The first of a series of ambitious exhibitions will be by acclaimed international artist and musician, Jimmy Cauty, best known as one half of the hit-making duo The KLF, who, after retiring from the music industry in 1992, became The K Foundation (an art duo consisting of Bill Drummond and Jimmy Cauty). The K Foundation Burn a Million Quid action in 1994 burned cash in the amount of one million pounds sterling. The money represented the bulk of the K Foundation’s funds, earned by Drummond and Cauty as The KLF. At The Florrie, Cauty’s ADP Riot Village will explore the concepts of freedom and state control in a post-riot urban landscape. Cauty invites you to witness the aftermath of an uprising, depicted though a fascinating miniature model village encased within a 40ft steel shipping container.

As a fan and follower of Cauty on Twitter, Tom Calderbank responded to a tweet from the artist, asking for nominations from anywhere in the country that has had a riot in the last 1000 years, to host the exhibition as it tours. Tom cited the Toxteth Riots of 1981 and invited Cauty to The Florrie.

Alongside ADP Riot Village, The Florrie will be mounting its own exhibition titled Aftermath 81. With a call to the community to help tell the story of the aftermath of the Toxteth Riots, the exhibition will commemorate the riots’ 35th anniversary with 35 objects on display. Tom remarks, “I want people to hold objects in their hands that are meaningful, that tell stories and that start conversations.”

The Florrie’s second exhibition continues to impress with work from artist Jamie Reid, known for his iconic work for the Sex Pistols and Suburban Press. Despite bursting onto the scene with a display of high profile artists, Tom is keen to point out that both were selected for their Liverpool connections, and his ambitions for The Florrie’s future are to engage with the grass roots artists’ community and build opportunities for local artists to exhibit.