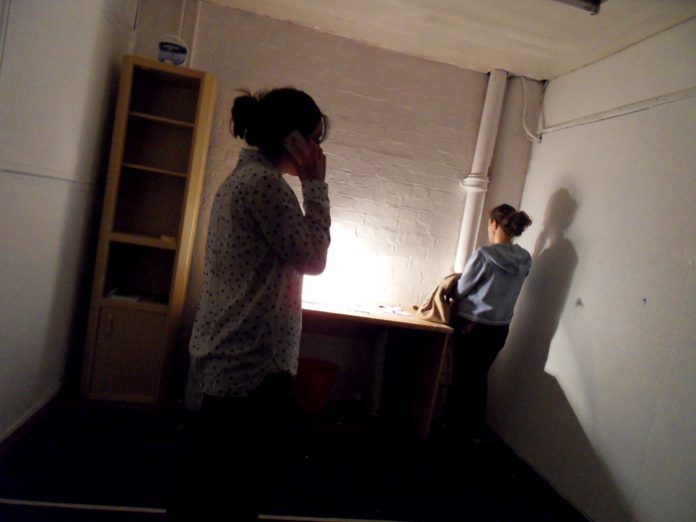 Enter Through the Newsagents

Colette Lilley is a North West based fine artist, exhibiting locally and internationally. A co-founder of 104 Duke Street Studio, she and two other members, Cherie Grist and Laura O’Reilly, looked for new premises after their former base in Wolstenholme Square was condemned and they were forced to move out, effective immediately. Lilley began to use the space for portraiture where she explores ways of seeing; her work is process based, involving pen and ink and the use of straight edge. She had developed the concept of seeing for survival and looks to introduce the process of meditation into her artworks.

Originally from Goole, near Hull, Lilley moved down to Loughborough University to study the BA in Illustration; after completing this she stayed at the institution to study for her MA in Dyslexia and Creative Process, where she developed techniques in theory-based drawing processes. After years of study in the Midlands she felt dislocated; she quit her part-time job as a checkout girl at Morrisons and began a new life. Coming to Liverpool for a New Year’s Eve party six years ago she was enchanted by the city and decided to make it her new creative base. In finding part time employment with the University of Liverpool she began the process of taking her artistic career to new heights.

…And that she did. From 104 Duke Street Studio she has exhibited throughout the country and internationally. In 2011, Lilley was selected to work on the Tate Modern project From Morning Till Night co-ordinated by Katherina Sede. Lilley recently featured on Axis Spotlight as one of five artists to watch in Liverpool Biennial 2014. A residency at Stiwdio Maelor in Corris, Wales last summer took her drawing to new heights. In this, she shared a house with two other artists and a writer, with her own bedroom and adjoining studio. A creative micro-base in a remote Welsh town with one shop and one pub was her new residence. Creatively rejuvenated by the period she is in the process of applying for similar arts-led schemes this year. A co-founder, a director, a leading creative force that will make things happen: Colette Lilley is a driving force at 104 Duke Street Studio and within the Liverpool artists’ community.

Cherie Grist is one of the co-founders of 104 Duke Street; her creativity and painting processes are prominent on the ground level of these eclectic studios. In her work she looks to combine abstract expressionism with more focussed graphic marks, combining various paints with acrylics and mixed media patterns, to form a vastness in variety through wall based painted media. She is very emotional in her approach to creating her paintings: she describes them as “visual references” to what is going on around her, a snap-shot in time. She looks to layer paint, sometimes exposing and hiding areas, similar to the way we convey emotions through life’s experiences.

In her Squares paintings, we are presented with Fighting, where Grist has used a mass of mainly primary colours positioned to contrast with each other. Jagged edged shapes and hazard style graphics combine to create an image of Conflict, a strong piece. Similar methods are used in Transition, where the concept of motion and change is conveyed through the scraping of paint in a horizontal motion and the moving of the wooden bases to control the dripping of the paint. This is complemented by the use of areas of relative emptiness and areas where masses of coloured marks encapsulate the surface. These paintings contrast with other works which are almost fully black and white. Again, we have an artist who presents high levels of variation in her practice: through her pen and ink work we see very controlled geometric patterns and the exploration of one-point perspective. Straight edges are used in the mark-making process, and the use of blocks of flat colour is commonplace.

From her creative base in Duke Street, Grist is making her mark on the creative industries, a solo show already planned in Knowsley for 2017. Selling through the Saatchi Art website she has come a long way since graduating from the University of the Arts, London in 2008. Winning the Cass Art Prize in 2011 she has moved from strength to strength; in Liverpool she had key works shown in 2015 for Light Night and the Threshold Festival, followed by solo shows at Constellations and The Brink. Cherie Grist is a name to watch.

The Dark Side of Light Night was a major exhibition held at 104 Duke Street Studio for Liverpool’s annual Light Night festival. The studios were transformed into an exhibition venue for previous years and group shows have been curated, The Dark Side being the most successful to date. Curated by Colette Lilley the exhibition ran from 13-15th May 2016 and explored the shadowy side of the human condition. An intimate exhibition featuring many experimental works, atmospheric and emotional information, bringing new focus onto the negativity of the human experience and mental well-being. The success of the opening night was partly due to the performance given by Iona Thonger and Edwina Lea (Be The Change Theatre), who compose work in protest of human trafficking.

In 104 Duke Street Studio we have a truly chaotic mix of artists. We have ink being inscribed to configure the complexities of human emotion. We have portraiture which reflects the thoughts and emotions behind the physical shell of the human form. We have paint being scraped on and off canvases, we have wood bases being rotated to alter drip motions, we have wallpaper being combined with graphical prints. We have performance art which challenges the socio-politics of human trafficking. We have exhibitions being hung which challenge our thoughts, beliefs and turn our heads in new directions.

Artist of the Week: Charles Gershkovich – Artist in Residence at...