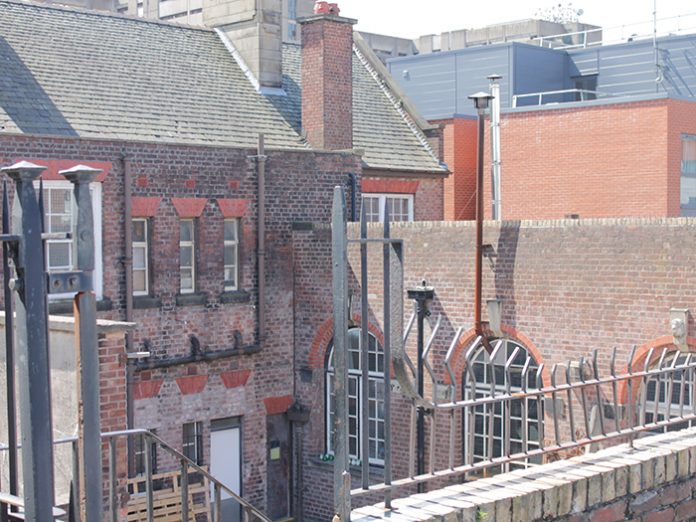 A Bit Past The Blackstuff: Bridewell Studios and Gallery in 2016

Liverpool had a fair few Bridewells dotted around the city centre, and they tend not to have the most exciting history. We all know the lock ups by Picton Clock, the old Archbishop Blanch site, and the internationally famous folly stitched into every Everton Football Club shirt ever worn. That was where the drunks slept it off. If you spent the night in there you were a nuisance at best. The Bridewells were a small step up. That was where the aggressive drunks went; the pick pockets, the petty thieves. So no, I’ll not be regaling you with tales of famous murderers, or their ghosts stalking the halls of the building on windy nights (although there are rumours of one). This article is an explanation of how a building, that spent huge portions of its life in limbo, has remained relevant and made some of the most incredible contributions to local, national and international creative industries.

So yes, the Bridewell temporarily harboured fictional Marxists and bore a series of national insults to the benefits system through Boys from the Blackstuff, but that is only a small part of its history. The artists Anish Kapoor and Adrian Henri, and singer-songwriter David Gray have spent time behind these walls since the building reopened in 1976. Some of the most important and well-known names in popular culture across the globe, not just in Liverpool.

That’s a serious story and that’s the focus of this investigation. Why has the Bridewell continued to be such a strong and silent force behind Liverpool’s creative impact on the world? Unlike rival spaces the Bridewell does not seek to be contemporary; on the contrary, it puts most of its effort into remaining independent and preserving the old fashioned drives behind studio practice rather than staying in touch with the new comings and goings.

Part of their success is this dedication to keeping the foundational ideas behind studio practice going, and that’s something which will always be part of the arts in Liverpool. There are countless reasons for that, but to my mind I can’t conjure one more significant than who works there. Damian Cruikshank and Richard Robinson are part of the fabric of Liverpool’s creative industries – whether they know/like it or not. Both have had a massive influence on art students beginning their creative education, as tutors on Liverpool City College’s Foundation Diploma in Art & Design (although I believe the name changes quite regularly these days), and as exhibiting artists themselves. Even the recently retired Colin Beckett used to share his time between the College and his Bridewell Studio.

Richard Robinson has recently launched the most jaw dropping ceramics studio in Liverpool too. Surprise, surprise, it’s in the Bridewell. His new ceramics rooms are just one of a selection of intriguing ventures the studio gallery is undergoing. With a recent foray into theatre and their now dedicated gallery room the building has found a new audience with soon-to-be-graduates, hosting three student exhibitions already in 2016.

It’s not just the local impact that justifies its place either. 101 Prescot Street was home to Anish Kapoor in the early 1980s while he was starting to establish the international reputation that has made him a household name. At the time, he was the 1982 Artist in Residence at The Walker, but there are few details about how he used his room in Bridewell Studios.

1982 was important to the Grade II listed studio building for more than just Anish Kapoor though. The 10th of October that year was the evening that Boys from the Blackstuff aired for the very first time on BBC2. The series has had its positives and negatives for the studio spaces, but despite the pains between the two, there is no love lost at the end of it all, with Snowy Malone’s signature still in the corner of his plaster work.

The series, which starred Michael Angelis and Bernard Hill, used the Bridewell as its set in several episodes, even referring to its history as a police station. It doesn’t particularly hold the themes of the series to heart these days, but perhaps its dedication to communal decision making and traditional communicative studio practice has been influenced by its famous history.

No longer a place of law-enforcement: diplomacy and discretion between artists has become the law, with studio managers Fiona Filby and Damien Cruikshank recently using a simple first come first served rule book to decide who got the cupboard. Damien won, and it’s now a craft beer room.

Looking back at the building’s history though, the room that stood out as testament to the cultural changes that have taken place since its use as a police station, was Julian Taylor’s huge studio, where his unmistakable Band of Life Hillsborough tribute was built. The room used to be the parade hall, where, with all the bravado of a child in fancy dress, officers lined up for uniform inspections prior to their daily duties. Now, the only masculine influence that remains is a topless Action Man on the windowsill.

Of their current studio members, you would be hard pushed to find one who was not worthy of note for one thing or another, with Tabitha Moses, a long standing studio holder, the first artist to win both the people’s and judges’ prizes for the Liverpool Art Prize at Metal. With so much already happening, and planned, it’s hard to believe they could manage much more, but on top of all that, they’ve just become a charity.

This year is the 40th anniversary of the birth of Bridewell Studios, and the studio members have established an enviable habitat for creating work. With their new charitable status, they could be about to find a new audience too, but we shall have to wait and see. Birthdays this big are a time to look back on chequered histories, and use the bits that work towards a chequered future.