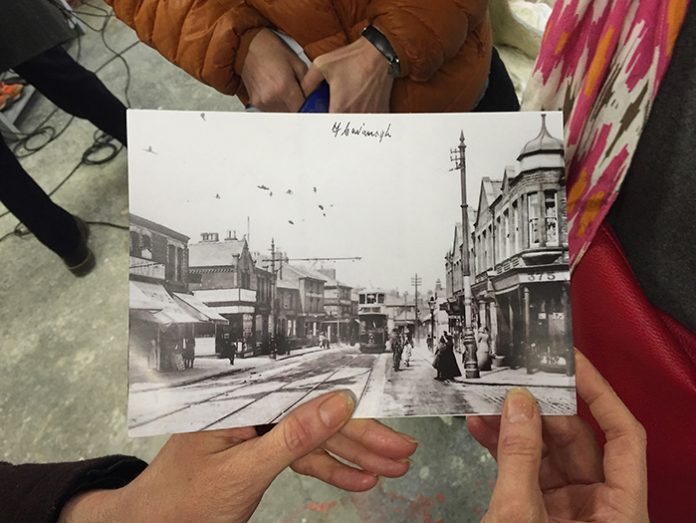 Translating The Street With Alternator

Alternator Studio currently houses four artists, with an additional outdoor building awaiting upgrading. The plan is that a dedicated space is made available all year round for short micro-residencies for local and international artists, especially those seeking a large making space close to the docklands and a multicultural neighbourhood. Alternator Studio recently received Arts Council funding for a project called Translating the Street, which focussed on Oxton Road, a street connecting the homogenous High Street and indoor shopping arcades of Birkenhead with the lush heights of Oxton Village. Alternator Studio, located at the top end of Oxton Road, considers this street as a great place to start thinking about issues around site and identity. Oxton Road is full of independent shops and small-scale businesses and artefacts, from model ships to parrot cages, from brooms and light fittings to exotic fruits, and from international hair studios to world food shops. Three international artists, Haleh Jamali, Harold Offeh and Jeff Young, were the guests of three independent shops on Oxton Road and the adjacent Borough Road.

Brigitte Jurack says, “In 2012 I took over one of the three remaining buildings on Balls Road East in Birkenhead. The linked buildings that flank the left-hand side as you come up from Borough Road were originally built in 1900 to house the Disbury Bakery and shop. The buildings are now occupied by a wood stripper, a picture framer and gallery, an office- based business and Alternator Studio. Alternator Studio sits at the junction with Oxton Road on which I discovered a diverse range of independent businesses, some of which became my regular haunts. These businesses serve a culturally diverse community, not only in relation to ethnicity, but also in relation to professions and pastimes. But how to unlock this treasure-trove of stories, cultures and customs? Each door could open the hidden worlds of shelves, boxes, clients and shopkeepers. The idea for micro-residencies was thus born! Just like the dough rising in the grand bakery, the studio once again is used to transform the small into the substantial. International artists have been invited to translate the stories of the street, build bridges and make visible the hitherto hidden. Translating the Street welcomed artists Harold Offeh, Haleh Jamali and Jeff Young to live and work in Birkenhead and to listen to the stories unfolding in three iconic businesses.”

Hidden Gems: Translating the Street
1 of 3