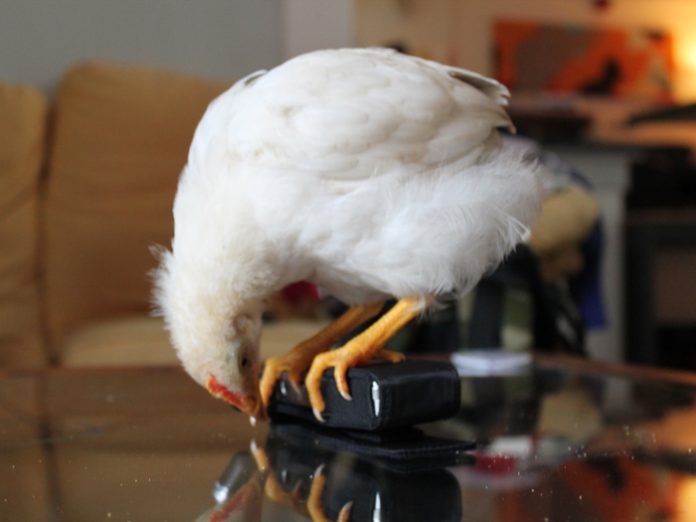 In possibly the weirdest interview I’ve ever done, two unwashed artists sat me down in a Bootle arts centre, got a baby chicken out, read me some poetry, and taught me all about Bauhaus (the band). Simon Woolham and Jennifer Reid spent fifteen days walking from Leeds to Liverpool along the canal, wild camping and taking up free lodgings where possible, all for the price of a song and a graphite rubbing.

Commissioned by Super Slow Way, their trek has been part of the canal’s 200th anniversary celebrations. The bicentenary festivities kick off on the 27th of August under the guise of Burnley Canal Festival. Oddly, this project will barely even be a part of the celebrations, in a strangely giving twist by Super Slow Way, who, by the sounds of it, have paid two artists to walk along the canal for two weeks saying Hi to people, for no real reason other than to get people to say Hi to each other.

The artists might have spent fifteen days on this walk, but they still seem surprised by how friendly everyone has been along the way. Jen, whose vocation is reviving the art of the broadside ballad, and writing dialect poetry, has been singing in exchange for their lodgings, while Simon’s main contribution seems to have been offloading his paternal instinct on unsuspecting kids on dirt-bikes along the way.

The pair have met before but could hardly be described as a collaborative duo. Jennifer Reid roams Lancashire getting to grips with local history through practice, and Simon runs Paper Gallery in Manchester while chasing up his own research. On the eve of their final few miles I met them, chicken and all, at Safe Productions in Bootle:

What is the project?

Jennifer Reid: So, it’s called hugging the canal, but I wanted to call it the Muse Aquatic. But we won’t talk about that.

It’s a 14 day artist residency on the canal, walking from Leeds to Liverpool. We walk each day for fifteen mile, and I perform each night at a pub, impromptu. I also clog dance as well, but I didn’t manage to this time because my feet are killing me. And Simon draws…

S: … yeah, my background is expanded drawing, so I also make film and perform drawings as well. I’m interested in generating narrative for future drawings, so I’m more focussed on the walk as an experience itself; picking up ideas or narrative from that. Letting that experience be what it is.

I’ve developed this website during my PhD at MMU – the title of which was Walking the Narrative and Physical, Virtual and Psychological Space – that uses an outlined version of google maps, so I’m able to situate where the drawings are on this map. So I’ve basically stolen google maps. I’ve been writing, and mapping out drawings. And carrying this very heavy badge maker, doing a project along the way called Wearing The Canal; doing rubbings of locks and making badges with them – taking pride in the canal.

And how that’s manifested itself for the two-hundredth anniversary of the canal?

SW: The walk is to commemorate the 200th anniversary. Not many people walk it, or we certainly haven’t met anyone else walking it. So obviously were promoting walking as well.

JR: Don’t be scared of the towpath, because no one’s on it anyway. Keep the canal alive, and say hello. And respect the bloody navvies that built it 200 years ago, that got treated like *~beep~* for doing it. And their families’ lives, and their livelihood, for you to be able to walk down that towpath, so bloody use it. It’s a straight road from Leeds to Liverpool. It’s easy.

SW: Exactly. We’ve kind of got over our own fears of camping wild, and everyone’s been really supportive. Most people we’ve met have gone “oh I wish I could have done that.” But they only go as far as that corner, and that corner, while we’re crossing counties. You know what I mean? People just like to keep to their patch, whereas we’re commemorating it by camping in spots where navvies might have slept.

What are the highlights (apart from the chicken on your knee)?

SW: We slept just outside Saltaire under overgrown polytunnels. That was probably very illegal, but no one’s really going to care. These places are just overgrown. I’m trying to think what the highlight for me is. We’ve met some really interesting characters along the way. We met one guy, Tony Tucker. He sang us a song with made up kind of words on the spot.

Have you worked together before this?

SW: No. We had a couple of meetings but my interest in drawing, and walking, and Jen’s interested in being homeless for two weeks. I think we’re obviously different. But, no, it is obvious. I’m 20 years older than Jen, and I’ve got kids, and you know a wife. And Jen’s got a boyfriend but no kids.

JR: I hate children. But not chickens.

SW: No she’d rather have chickens. So yeah we’ve had to align a little bit as well. I think that’s a really nice thing to happen. We can do that, I think we’ve got a lot of similar interests as well. Despite what Jen says. Musically mainly. Probably.

It’s quite nice putting two artists that have never worked together, together. Even in the way, you’re probably starting near the Tetley in Leeds and then ending up at, this community arts centre at the complete opposite end of the spectrum, funding wise, than the Tetley.

SW: Generosity is a massive part of it I think. The landlord of the Scotch Pipe for example, he was like, “if you get any hassle sleeping in the ruins y’know, just give us a call.”

JR: People have got in touch with me through my website – a lady called Janice – and alerted me to a folk night that was on. So then we went and sang at it, and then she gave us a lift back.

SW: And connections too, like the house that we stayed in in Carbol. That was a friend back in Macclesfield.

JR: Her mum’s house. It was stunning. Huge Victorian house. We rolled up and it was like… wow.

Is there anything that needs to happen between now and the Canal Festival?

SW: I’m going to be compiling everything for a few months, but the photographs will be uploaded as and when. But yeah that’s kind of like a live gallery, the website, so it won’t be like, “Ta Da!” It’s called insearchoftheshortcuts.com. That’s where the legacy of the project will be housed.

JR: My friend Graeme prints on a 19th century press, so I’m going to get him to typeset my dialect poems as a little chat book.

Can you read us one of the poems?

Oh the scenery’s stunning,
And the boats are beauty,
An’ fowk are friendly.
Y’ can’t go wrong,
Wi’ dogs ‘n’ jannock fowk,
All the way up t’ Pendl’

An ‘av y’ gone through Yorkshire?
An’ y’spent night up there?
Ah lucky you!
A’v been through Gargrave
And on to Foulridge
On the back’v a brew

Y’dont need much t’eat,
Just heart tha’s willing
To traipse at y’leisure
Of these British waterways,
Y’ll always be gobsmacked,
At the two counties treasures.

Canals made by folk
Who a’nt ‘ere to enjoy it
Its a shame that,
So when y’ walking
Past Brindley’s portrait,
Yo’d best tip y’r hat

There you go – have fun transcribing that one!

Right is that it then? We’ve done it! We’ve given you a chicken.

SW: Look at that. Chicken and laptop. Have you ever had a chicken in an interview?

No, I’ve never done an interview with a chicken.

SW: Oh yes. There is a chicken poo there.

SW: It’s a snakey poo. Actually, yeah. Its got like an eye and a tail.