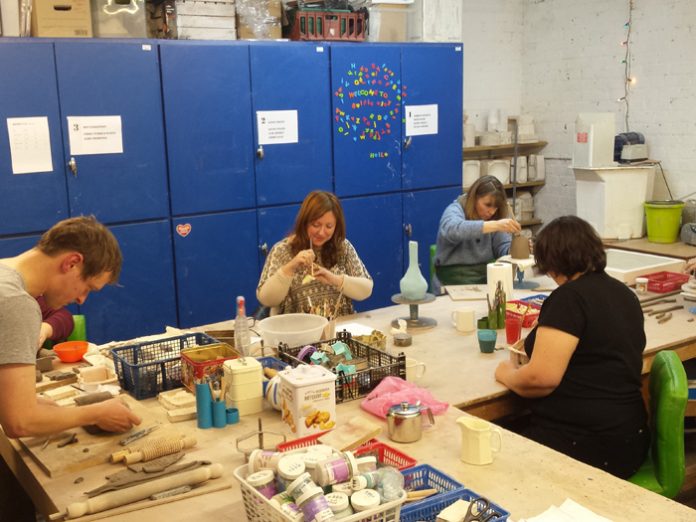 It’s been a little over a year since Baltic Clay Studio opened in the Baltic Triangle. In that time they have gathered a talented collective of around 12 artists and set up an impressive schedule of workshops for every skill level.

The artists in question have been busying themselves in recent months creating a range of unique bowls for their first ever charity event with neighbours Fruit +Fibre Cafe. On 24th February they’re inviting you to come down to Norfolk Street and buy a bowl of Scouse to eat and then take home and keep. £8 of the £10 spent will be going straight to The Whitechapel Centre, a local homeless charity.

I went down to Fruit + Fibre this week to have a coffee and talk to Louise Waller, organiser behind the event and studio member at Baltic Clay.

Thanks for taking the time to talk to us about your charity event. Baltic Clay has been going for around a year now, what do you feel is the primary objective of the studio?

LW: I think that when Chris set the place up he was aiming to facilitate local potters and make the hobby easier for people to do. It’s always easier to have a designated space. Even though he runs the facility we very much see him as another studio member, he’s a sculptor himself so it allows him to have the space but also support other members of the community.

The Baltic Triangle has a wonderful creative community, have you found that being based in this part of Liverpool has raised the profile of the studio? Do you collaborate often with your neighbours?

LW: Baltic Clay was set up in November 2015 as a crowd funded project. The area was already a developing place at the time and it has grown a lot recently. We do collaborate with the people in our building and sell things at craft fairs and the like. We’d love to work with more people and set up some display areas to sell pieces. You make these things because you love to make them but slowly your spare room fills up you know? So it would be good to have somewhere more permanent to sell things and help them find a home.

Personally I am working with Ryde Cafe on a range of jugs and teapots right now. They are a cycling-themed cafe based on the Cains Brewery site. There’s so many new businesses in the area, its been good to find our way together as a community.

Baltic Clay turned 1 in last year and this is your first fund raising event as a group, what made you choose to raise money for the Whitechapel Centre? Is the charity particularly close to your heart?

LW: We chose Whitechapel because it’s one of the biggest homeless charities in the area. We all travel into Baltic from different routes and one of the things we often talk about in the morning is seeing so many homeless people on our various routes. We felt a little helpless in the face of such a large scale problem but that if we were going to support anything we’d like it to be a charity like Whitechapel.

We’ve set it up so that £8 of the £10 that people will be paying at the event is going directly to the charity. It’s an organisation that we all agree on and Hannah (owner of Fruit + Fibre cafe) has worked helping to feed the homeless for the past 15 years or so with other charities so she was also immediately on-board.

What can people expect from the evening?

LW: We’re hoping people will arrive between 6-8pm. I would say that you should come as early as possible. We’ve had a lot of interest so if you want to have your pick of the bowls on offer the earlier you can get there the better. You’ll be choosing a bowl and paying £10. You can then fill it with either Scouse, Liverbird Scouse or blind Scouse which is our veggie option. You can also have soup if you prefer. You get bread and a hot drink as well and then when you’re done we wash your bowl out for you and send you away with a bag of info on us and a one of a kind, hand-made bowl from a Baltic Clay artist.

If this event proves to be successful will you be running other charity events? Would you pick other causes to support?

LW: If this turns out to be a success we would love to make it an annual thing but the amount of bowls that need making and people that are interested would be need to be evaluated. We talked about getting local celebrities to come along and make or decorate a bowl but time constraints stopped us. This has been a chance to start small and hopefully grow the project in the years to come. I would be happy to stick to the same charity but we’d probably discuss it as a group each year.

As a born and bred southerner who’s never tried Scouse in her life, can you give me any tips on what makes the best bowl of Scouse?

LW: Well I’m not from this area either but I know that here at Fruit + Fibre they sprinkle pickled beetroot onto theirs to add some colour and an extra tasty kick. Makes it much easier to photograph as well!

After taking a quick peak at some of the bowls on offer this event looks well worth a visit. Louise is passionate about her work and is putting the studio’s collective talent to good use raising money for such a worthwhile cause. I’m looking forward to going down to Norfolk Street as early as possible on the 24th and picking a bowl early, I can already tell that they’ll be selling out fast!

Scouse in a bowl – is good for your soul