A few weeks ago I had the pleasure of interviewing Peter Davis, nominee for the Aesthetica Art Prize 2018, as he was awaiting the launch of his latest solo exhibition, Zeitgeist, at Warrington Museum & Art Gallery.

A few weeks in, he’s a little closer to finding out if he’s won, the exhibition has been filled with visitors, and hopefully made a few question the role they allow technology to take in their lives. His work, unlike a great deal of contemporary painting, doesn’t require a huge knowledge of fine art to enjoy. In fact, it encourages conversation far beyond the realms of art, and it’s the almost everyday.

Zeitgeist is more likely to have you arguing with each other about the role of technology, and how reliant you are on it, than it is to have you discussing historical artistic precedence. Although talking to Peter Davis, both are just as important to his work, which uses a dedication to his craft and a fascination with his subject to produce work that can engage and captivate anybody.

The following interview strays from art quite regularly, focussing more on his depiction of modern technology and the role he has watched develop, but, I think, sums up his work and this exhibition perfectly:

Your exhibition opens in Warrington on Saturday. So it’s a follow on from the Open last year, is that right?

I’ve entered Warrington Contemporary Arts Festival for a couple of years. I came runner up in 2016 and then last year, I won the Visitor’s Choice Award, so with Warrington Art Gallery I seem to have a good relationship there! This solo exhibition has been brewing for about six months or so. The painting that I had in last year – that won the Visitor’s Choice – is part of this series. It’s all about looking at that zeitgeist, and my take on that really.

I consider myself a social realist painter, looking at the spirit of the time and taking a view on it. I’m a figurative painter, and this series is becoming a bit of an obsession for me. There are 13 paintings in the show and the majority feature one person, but the nice thing about when you bring them together as a body of work is that they imbue a different quality. They are not so much about the potential isolation, when you might be standing in Lime Street station on your phone, and it might be absolutely bustling but no one else matters, because you’re on your device.

There’s always a dichotomy in my work between the social and the anti-social; the “I’m amongst friends but I’m still on my device”. I’ve got some great stats that say that 80% of us are still on our phones in mid-conversation with friends, so technology addiction is really becoming a thing we’re all guilty of.

The images I’ve seen, there’s something about them that really captures it. There’s that one of the guy with his phone, and the light picking up on his face. It’s that complete captivation with the device.

That’s the way I see it. I’d love to be able to get somebody who’s not been on this planet for 15 years and then just drop them down in pretty much any environment and then get their take on what’s going on. I think it’s all kind of nullified in our minds, we see this ubiquitous pose that we’ve all got with our heads down and I think we’ve all kind of got used to it, so I’m trying to decipher that really in my paintings, by taking them out of context, giving them a tonal background, and telling their story. Individually, I’m really pleased with them, but they do take on a different dimension when they come together, so I’m really looking forward to the show.

What do you think people’s reactions are going to be seeing them all in one place altogether – or what are you hoping their reactions will be?

I’m really hoping that it kind of helps us almost press the re-set button for a minute in what we’re – I won’t say guilty of – but what we’re all partaking in, which is this digital revolution that is changing the image of ourselves physically, but also through our connections with people, and self-image, and all those things – there are so many sub-texts to the work – but I think the main thing I would like people to take away from the show is to think “hmm – this is what I’m part of”

Part of the exhibition is a wall of stats from different reports and research groups, all about technology addiction now, and part of the wall is what the next five, ten, fifteen, twenty, years are going to bring in terms of the way technology is going to be able to make us do. I think it’s quite an accessible exhibition. As a contemporary art exhibition, people can come to the show that wouldn’t necessarily gravitate to a contemporary art exhibition because – like I say – I think it’s something that touches on us all.

I don’t know if you were watching The One Show yesterday, but they did a segment on where technology is right now. They had Will.I.Am from The Voice, who is fairly famous for sitting there on his phone, tweeting away while presenting. He said something uncharacteristically profound, which was that the way we use the internet is still growing up, and people are still using the internet in a very childish way sometimes. It’s very clunky and no-one knows the perfect way to act yet. There’s a nice link between how engaged people are with those devices and what that actually means today.

And what that will mean in another ten or fifteen years’ time. If you look back to the 1800s, you see painters depict working class life; you look at Edward Hopper in 1930s in New York depicting his view of normality. And as members of the public we love going into a gallery and seeing all that and reminiscing about a by-gone era. I would like to think that my work will stand the test of time, and that in the future we can look at these pictures and feel quite reminiscent.

I’ve had [people] – particularly a younger audience – come to see some of my work in the past and they will laser beam into a particular painting and they say “Ooh, I can see what she’s holding, she’s on Facebook, but it’s the early style of it”, and “I know what that phone is, it’s such and such a phone.” It’s all happening so quickly. I mean the iPhone is 11 years old, and that was the start of the smartphone really. Like you say, we’re in such infancy and yet it’s taken over so much. The state of change in our society is exponentially getting quicker and quicker and technology is becoming – well we’re not thinking how we used to, are we?

It’s really interesting to hear that there’s this reaction from people coming to the show and saying that they recognise the old version of Facebook, or that they can recognise a particular model of phone, and how in just two years that has changed.

We’ve all got our L-plates on this whole journey. We’re still calling them smartphones, but they’re not – the phone is the least part of what they are. There’s still a whole change to be had in terms of language because it’s not really a phone anymore. The more we communicate via Snapchat or WhatsApp and all those things, the language of calling it a phone has got to change.

I’m about to do something with a tilt brush I think, and I quite like the dichotomy of a real brush observing a tilt brush. There are so many areas, but unfortunately I have to sleep! I’m always about eight or nine paintings ahead! 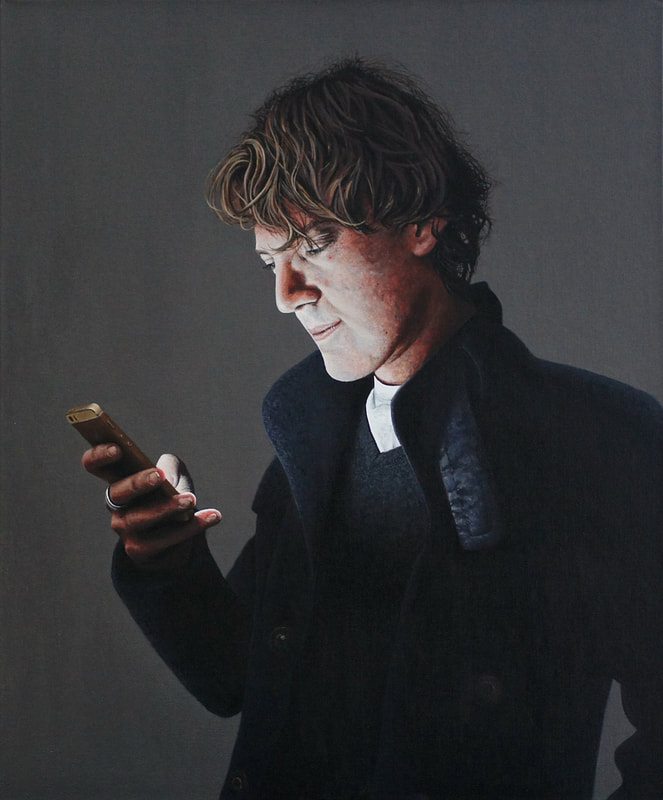