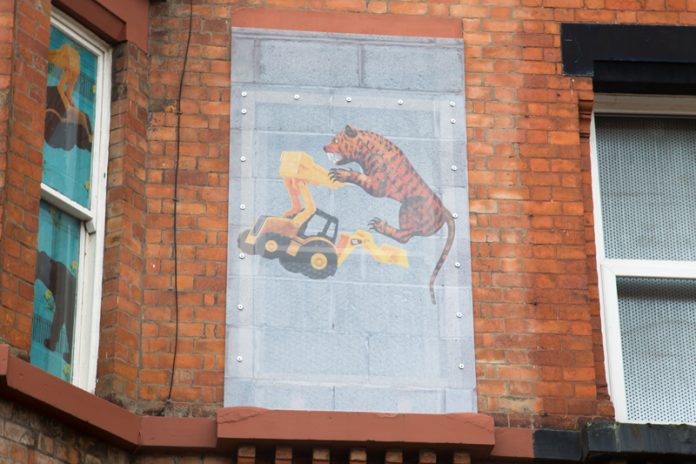 Showing at Bluecoat until 23rd April 2017

One of over 100 artists involved in the exhibition made up of over 50 years’ worth of exhibiting artists, Nina Edge talked about the importance of the Bluecoat, and explained how it is still a gallery that encourages local conversations.

In this case, that conversation is Nina Edge’s Nothing; a project that illuminates a process that began in 2004 when her home and studio were earmarked for demolition. The work focuses on the Welsh Streets area of the city, where a housing scheme was stalled by a successful campaign to spare ten Toxteth streets from demolition. Now that refurbishment developers have started repairs in the area – a full thirteen years after the scheme was first announced, the artist has reflected on what residents were told at the beginning of the process.

“We were told that if we did not acquiesce to demolition that nothing would happen. I wanted to make a work that reflected on what that was like; the threat of nothing, along with the reality of complex procedures and processes. I wanted to bring the experience of living for thirteen years in a tinned up street to life visually, using my windows in my home in Kelvin Grove, and at the Bluecoat gallery as a canvas.”

Kelvin Grove is one of the few remaining Housing Market Renewal streets once blighted by the threat of demolition, and now reprieved and awaiting refurbishment.

The Nothing artwork is window based and can be seen in the Bluecoat’s gallery and courtyard, as well as the artist’s house on Kelvin Grove, L8. Thanks to associations with Bluecoat and Liverpool Biennial, the aesthetic of the tinned up street as an urban environment, and the impact of demolition, either threatened or realised, has reached a new audience. Inclusion of the project in Public View (exhibition at Bluecoat until 23rd April 2017) prompted us to find out more from the artist:

How significant was it to be asked to be part of Public View, and part of Bluecoat’s 300th anniversary exhibition?

I have been involved in several exhibitions and live art projects at Bluecoat over the years so it is a joy to return with new work for this anniversary show. Originally, Bryan Biggs [Artistic Director, Bluecoat] wanted to show work that had previously been shown at Bluecoat, but the things I had shown there all took up a lot of space. They were whole space installations or large textiles displayed in what is now The Hub but used to be the gallery space, or live art works.

As there were over 100 artists to fit into the show I suggested making something new, involving elements of works previously shown at Bluecoat. I made new colour prints, one of which, titled ‘For the Lost Locks of Liverpool’, shows me pushing keys off a table. The keys are part of a collection of 4000 keys shown at Bluecoat in my 1994 installation ‘Virtual Duality’.

The keys also feature in the large prints placed over the windows of 40 Kelvin Grove making the house appear to be boarded up. A number of images combine with the key-scape to cover every window on the front of the house. There is a reworked William Morris wallpaper on the ground floor, Tipu Sultan’s tiger rides a bulldozer on the first floor, while Mr Punch’s crocodile and a selection of panthers, polar bears and tigers battle it out with heavy plant machinery on the second floor. Information about the Nothing Project appears on what look like estate agents ‘for sale’ signs.

What ties the work in Public View at Bluecoat to the wider Nothing Project?

The empty Welsh Streets have been photographed by local and professional photographers for many years at my request. At first this was just to document the process of deliberate blight that unfolded in our neighbourhood but later I set up a series of photo-shoots that I art directed and composed. So there are some Photos awaiting selection that that are not record of the situation, but a form of narrative behaviour. A selection of these Art prints will eventually be for sale and one of them was reproduced as a three meter tall image for the tall gallery windows at Bluecoat. Two street views were also made to measure for the Bluecoat windows, mirroring the use of images located in the architectural structures at Kelvin Grove.

The photographs tie the two places together quite literally, one appearing to board up a door to the Bluecoat Garden, and one making the gallery appear to have a Welsh Streets downpipe complete with ferns and moss positioned between the new and the old parts of the Bluecoat structure. So huge prints show what the ‘nothing’ that residents were threatened with looked like. I have placed images as if from the gallery in the despoiled Welsh Streets, and placed images from the spoiled Welsh Streets on public view in the city centre, in the gallery on public view, at the Public View exhibition.

I know that occasionally people who have visited the show at Bluecoat have then followed up their interest in the work and come over the Welsh Streets to see the work I the windows and the signage. I met a hair dresser from Manchester, who was told about the work being part of a two venue activity by gallery staff at Bluecoat who then came over to see the work at Kelvin Grove. I met him on the doorstep photographing the work. The way the work feeds people from one venue to the other has been very interesting. It uses one story to introduce another story, one space to speak about another space.

One of the most exciting things about it, is how well it seems to be getting people to the Welsh Streets, so with Bluecoat’s exhibition over soon, how will people be able to continue to see and engage with ‘Nothing’?

There is some impetus to build on. Local audiences see their experiences reflected in the work – they look at the changing street display when they are passing as they have done since 2004. Support from Liverpool Biennial and Arts Council England has provided a springboard to encourage people from outside the city and the UK to visit the work. The Bluecoat, the local photographers and artists who have been involved in productions or debates about the work at Metal, Bluecoat and in the Welsh Streets have also given the project a steady supply of audience. Feedback collected from people who have attended talks, walking tours, or visited the artwork inside the Bluecoat or outside Kelvin Grove, shows many people saying they would like to see more work so continuing seems appropriate.

I plan to keep the Nothing project going as a street artwork at 40 Kelvin Grove until the street is repaired and re-occupied. Without art this long process would have been bleak, and as an artist – well I have nothing to loose by bringing some colour to the grey tinned environment that surrounds us [Facebook here, Twitter here].